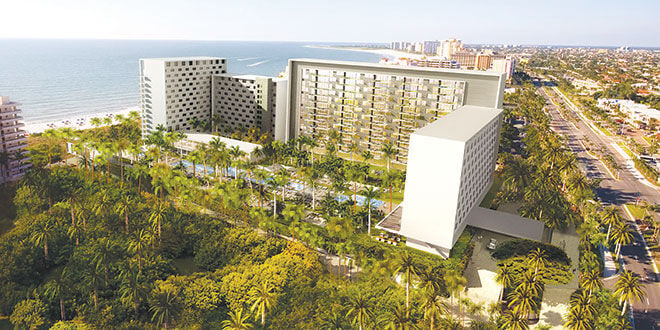 An aerial view of the Marriott’s Crystal Shores on Marco Island. SUBMITTED PHOTOS 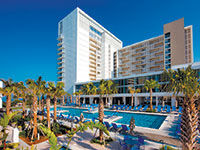 The pool area of the Marriott’s Crystal Shores on Marco Island. SUBMITTED PHOTOS

A rendering of the living and dining areas of the new villas being built at the Marriott’s Crystal Shores on Marco Island.

While some other major construction projects have received much attention this year, the Marriott’s Crystal Shores on Marco has quietly embarked on renovation and expansion that will more than triple its guest capacity.

Work on the project began in January, and when it is completed in the spring of 2017, the beachfront, timeshare resort’s single tower will have been joined by two more, raising the total number of villas from 71 to 219.

The new towers will each have a lobby and guest reception area, a porte cochere and a plaza level, along with new entry roads, landscaping, courtyards and aquatic features. A second 13-story tower will be added to the Crystal Shores’ existing spire of that height, as will a 10-story tower, all situated off S. Collier Boulevard. Each tower will have two-and-three bedroom villas with guest parking at ground level. The fitness area, kids’ club and

convenience stores will be located in one of the new towers.

“It will be very, very nice,” said Ed Kinney, global vice president of corporate affairs and communications for the resort’s owner, Marriott Vacation Club International. He said company policy barred him from discussing the project’s cost.

This is not the first big construction project at the Marriott’s Crystal Shores.

Kinney said Marriott International purchased the former Radisson Suite Beach Resort in 2006 and began reworking the property, replacing the existing hotel with the current tower, which opened in March of 2009. Additional villas were considered at that time, but those plans were tabled.

“We had always intended to finish out the project, but we put it on

hold for economic reasons,” said Kinney. “Our company spun off from Marriott International about four years ago. We were conservative in how we were spending money, as we became our own company. As the market continued to improve, we could see no reason why we shouldn’t get back into expansion mode.”

The villas will come equipped with full kitchens, separate living and dining areas, large master bedrooms, and private balconies with views of the Gulf of Mexico. Guests can also enjoy preferred beach access, heated pools, a whirlpool and waterslide, as well as Stilts Bar and Grill and golfing at The Rookery.

Marco has proven to be a great location for Orlando-based Marriott Vacation Club International, said Kinney. “The community has been really supportive,” he added. “Our guests have really enjoyed the community there. There are so many things within walking distance. The beaches are maintained so well. It’s really a nice environment for us.”

Sorry, there are no recent results for popular videos.