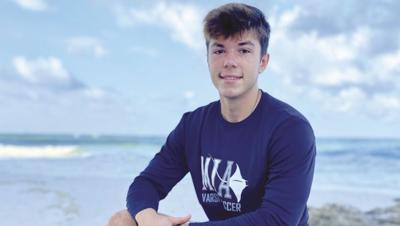 Mia Witthoff, a star swimmer at Lely High School, who is second in her class academically, and MIA’s Nick Vergo, captain of the Rays’ football and soccer teams, attended middle school together at Marco Island Charter Middle School before going their separate ways for high school.

Vergo was urged to pursue the Winged Foot Award by his athletic director, Ryan Roberts.

“I’d already gotten through my sports season and it became an option for me to apply for it,” Vergo said. "My athletic director hadn’t said anything all year and kind of just told me to apply for it. When I heard about it, I had to apply for it. It’s going to help me get through college. Growing up on Marco, my parents sacrificed a lot for us to stay on the island. It’s just nice to return the favor back to them - sacrificing, earning something for them for my college education. All of these scholarships are going to help me get through college, at least the first year.”

"Guiding me on how to be a leader to younger kids on and off the field, mostly in football,” Vergo said. "It’s really hard playing for a team that’s not the greatest. We’re trying to build up a program. I was brought into that leadership role. We just had to do it. We learned along the way. We helped each other out.”

Roberts appreciates everything Vergo brought to her school.

"Nick is truly a one of a kind,” Roberts said. "He has an absolute heart of gold that he shares with everyone he meets. He’s kind, caring, compassionate, and has an intensity on the field that draws his teammates in. He has been such a gift to Marco Island Academy. Athletically, he’s one of the best football and soccer players the school has ever had. He has become the face of both football and soccer programs and is the perfect student ambassador for the school. Academically, he’s an incredible student. I had the privilege of having him in my economics and government class last fall. His insights and ability to read a room allowed for some great conversations in that class. I looked forward to that class. Nick has this magical ability to positively impact everyone he meets, from faculty to friend groups, he’s held in the highest regard.”

Roberts recalled a rainy night on the gridiron in Ft. Myers when Vergo’s character shone brightly.

"A favorite memory I have of Nick,” Roberts said, "was during a very close, hard fought football game in the pouring rain. Nick had run the ball all night, as well as playing solid defense the entire game. And he just needed a break. Coach Montgomery put a freshman running back in. He was so nervous, but Nick gave him a quick pep talk on the sideline and once he got out there, he ended up sliding through a hole for a thirty-yard gain to put us at the ten-yard line. Nick was the first one to congratulate his younger teammate, literally lifting him up and telling him how proud he was of him. At the end of the game, our freshman felt defeated because he was unable to get into the end zone. It was Nick who had his arm around him, keeping his spirit up, coaching him essentially, and being his biggest cheerleader. It’s moments like that where you reflect on what an asset Nick has been to not only our programs, our school, our staff, but especially our student body. He’s truly the best. I enjoy chatting with him daily and will really miss talking football with him on the sidelines."

Vergo was also influenced by his football coach, Lew Montgomery.

"Mr. Montgomery is a good coach,” Vergo said. "He’s the one who believed in the program when no one else did, if I'm being frank. Mr. Montgomery put in countless hours of coaching. Always being there. He’d wake up on Saturday with us on the beach, stretching. It just shows how much faith he has in the program. He wants to be there for the program. I know he’s going to continue to do that for us.”

Montgomery felt fortunate to have Vergo as a captain during his first year as a head football coach.

“Nick was beyond a blessing,” Montgomery said. "He was a kid who was really coachable. Totally open to any advice, critique, we’d give him. His athleticism was so great. I’ve never been around anybody who had that much God-given talent and was so humble. He was always team first. He was a running back, but he came to me and said, ‘If you want me to play line, I will. Even without me asking.”

Someone told Montgomery of a good deed Vergo did off of the field.

"I find out after the fact,” Montgomery said, "that I had a younger kid who had acted up in a math class. Nick personally discussed it with the young man and they walked up together to apologize. It was not a punishment thing, it was him being a good mentor to this young kid. Saying, ‘We don’t behave this way. This is why the teachers are here and this is what their job is.'  The fact that it came from Nick, someone they all look up to, they listen to him. He’s going to lead by example and he’s also going to lead through his words. He’s not going to be loud. He picks his words very carefully, but he makes sure he gets his message across. He’s a great kid. He’s a great guy. He’s never once pointed the finger. He was just such a great teammate. Such a great athlete. We were just blessed to have him. I’m so glad he was here for our first year. I guarantee whatever he chooses to do at the next level he’s going to be great. He’s destroying the weight room. He looks great. He loves his family. The respect he’s always shown for his brother and his mom and dad. That’s both nature and nurture for that kid. His parents deserve a lot of credit because they have a great product. He’s just an awesome young man. He’s going to represent MIA for years to come. Hopefully, we get to coach his kids someday."

"Nick is one of the kindest individuals I have ever met,” Scott said. "He consistently puts others before himself and learns from the choices he makes. He is a leader in every facet of his life and cares about every single person that enters it. His heart has grown with every muscle he has built and I am proud of him every day. In turn, he has changed my life for the better.”

Scott changed Vergo’s life, too, making him realize that he needed to work harder in the classroom.

"In middle school I kind of slacked a little bit,” Vergo said. "I wasn’t really disciplined with my habits. When I got to high school Miss Scott asked me, ‘Do you want to go to college? You’ve got to step it up. You need to get on this AICE track.'”

AICE is an international curriculum and examination program that prepares students to enter college, provides them with the skills required to be successful once there and once earned, qualifies students for the Florida Academic Bright Futures Scholarship.

"My freshman year I got good grades,” Vergo recalls. "From there it just kind of set the discipline standards, what I had to do to get things done. Sophomore and junior year were hardest, a lot of AICE classes for me. I just grinded it out and got my AICE diploma my junior year. Got good scores on all of my tests. Senior year I was able to focus on getting my SAT score up, getting all of these scholarships filled out, applying for colleges. I did all the early applications for colleges.”

Vergo has some advice for incoming MIA students.

"I highly suggest getting in touch with Miss Scott, she’ll guide you along the way. The AICE diploma allows you to get Bright Futures, these are college level classes that you have to take, so they are difficult. But it is worth it because you get 100% bright futures. And it boosts your GPA way up high, so it looks good for the colleges.”

Vergo likes his chances of winning the Winged Foot Award as Collier County’s top student-athlete but is philosophical about the entire process.

“I think I played a vital role with leadership at MIA,” he said. "But if someone beats me, I know that person had to do something crazy at their school to earn it. So, I’m not going to be mad if I don’t get it, I will be happy for them. I think I have a good chance of getting it.”

Vergo is excited about starting school at UCF. His priority is to help other people in his career.

"At UCF I’m planning on going pre-med,” he said. "So, four years of college, and after that medical school. And from there I’ll get my residency started. I hope to get done a little sooner than 10 years. Throughout high school I was always getting injured. I was not able to pursue my career in soccer. I was getting looked at by a few schools for soccer in college. I tore my hip flexor. I had a good orthopedist that got me through it. It was the orthopedist who works with FGCU. He always helped me get through my injuries and back on the field. I was never out for a season. He kind of opened me up to wanting to pursue that myself. Watching him work his butt off trying to get everyone back on the field. I want to help people and stay close to sports. So, it really fits well to be an orthopedist."

“Mr. Sotolongo is a great coach,” Vergo said. "What we lacked in the past was discipline on the field. There were three captains. He brought a structure to the team. It led us to have success on the field.”

A scene at the conclusion of a hard-fought early season loss of the football field epitomizes Vergo’s character. A promising freshman made a mistake at the end of the game and was distraught after the game. Vergo was there for his young teammate.

“Everyone makes mistakes on the field,” Vergo said. "I made so many mistakes. All you can do is bring your teammates up. With a small program, you can’t have kids quitting because they make mistakes. You never bring your teammates down, you bring them up. You keep them to a higher standard. I remember he was bawling on me. Everyone makes mistakes. You’ve just got to learn from your mistakes and keep going."