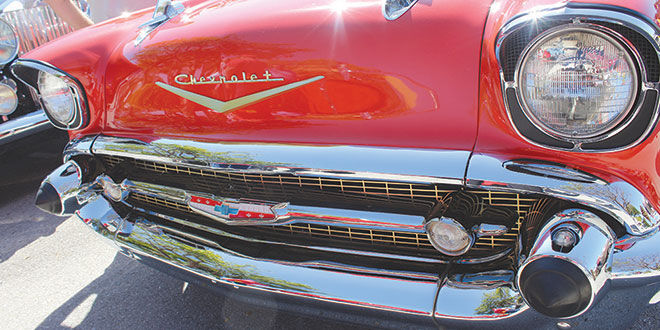 The shiny, red Chevrolet commanded the attention of all who passed it. 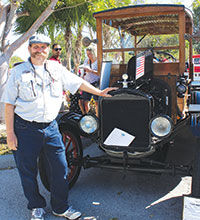 Keith Pershing, owner/master technician of Island Automotive, with the Marco Island Historical Society’s 1922 Ford Model T. Keith is responsible for resorting the 94-year-old car, and is one. The interior of of few people who can actually drive it. PHOTOS BY SAMANTHA HUSTED 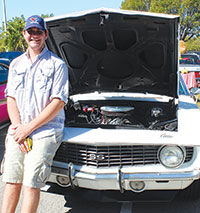 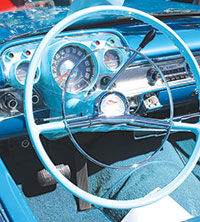 The interior of the car matched the outside, down to the steering wheel. PHOTOS BY SAMANTHA HUSTED 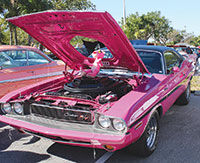 The bright colors of the different cars all reflected beautifully on the sunny morning.

Keith is responsible for resorting the 94-year-old car, and is one

On February 14th, Valentine’s Day, the Kiwanis Club of Marco Island held their 12th Annual Car Show at the NCH Health Care Center on Marco. It was a warm, sunny afternoon—a perfect occasion for a romantic stroll through the 200 shiny, classic cars.

Each year Kiwanis organizes the event in an effort to raise money for the various children’s programs of Collier County and East Naples that they support. The money goes towards Key Club scholarships, programs within local schools such as Manatee Elementary, Tommie Barfield Elementary and the Marco Island Academy,

and other organizations such as Youth Haven.

The car show first came to fruition about 13 years ago. It was Kiwanis member John DeRosa that came up with the idea. Since then, the show has been growing each year with both car entries and spectators. This year about 4,100 people showed up to view the many different cars and to show their support.

It’s interesting that this year the event happened to fall on Valentine’s Day. This perhaps holds some sort of symbolic significance. The car owners’ work hard to keep their cars beautiful and running smooth, a labor of love one might say.

One of the oldest cars there was the Marco Island Historical Society’s 1922 Ford Model T. About

four years ago, Master Technician Keith Pershing and his team at the Island Automotive shop restored the 94-year-old car, making it once again drivable. Well, drivable to the three people on Marco who know how to operate it.

While one of the oldest cars was 94, one of the youngest participants in the show was 18-year-old Sean Flynn, a senior at Marco Island Academy. When asked how he came in possession of a 1969 Chevy Camaro, he said with a laugh, “Easiest way to tell the story,

it was blind luck.”

In congruence with the event, there were performances by the Celtic Spirit School of Irish Dance, the Marco Island Academy cheerleading team, as well as the Marco Island Middle School’s jazz band.

The cool thing about the car show is that even if you’re a person who knows nothing about the intricacies of cars, or antique cars for that matter, there’s still so much to enjoy. The car enthusiasts are more than willing to explain whatever elementary questions you may have, and beyond that, there’s so much to just look at. Even if the various antique car engines don’t give you a fuzzy feeling, you can still appreciate the beauty and care and the prideful ownership

these people have towards their vehicles. People love their cars.