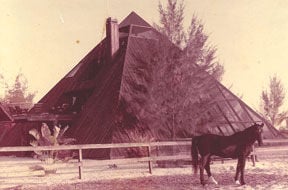 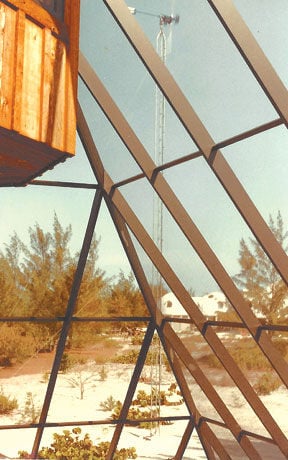 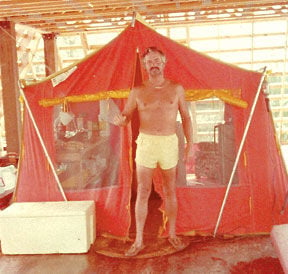 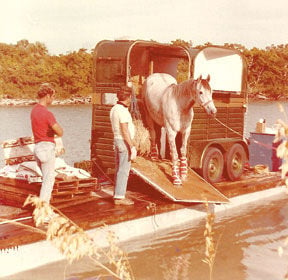 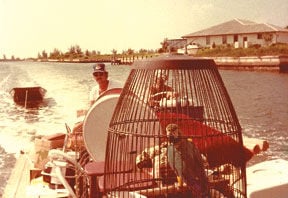 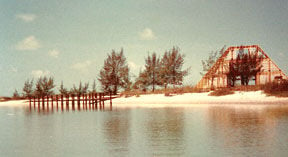 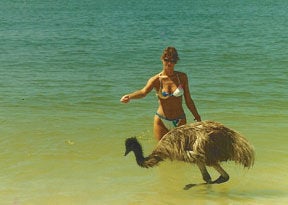 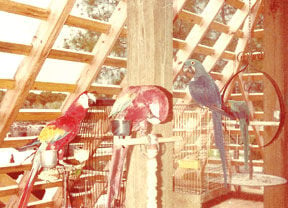 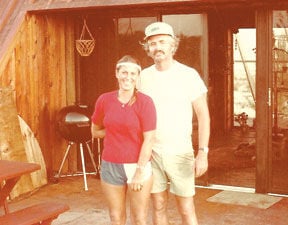 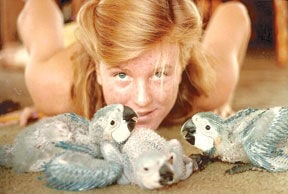 “This is where it started. Do you see how far away the beach was? Never did we ever think the water would ever come that way. All the land was available but we decided not to buy where the domes were because we were afraid of erosion. Nevertheless, the erosion came from Marco and everything started building up at the point and blocking off the pass. You can see by the pictures.”

four photo albums filled with memories while at her home in Naples. For ten years, she lived in a pyramid-shaped home on the barrier island located west of Marco with her then-husband, daughter and her menagerie of animals. It was the first home to be built on Cape Romano–yes, even before the dome home.

“We couldn’t wait for the house to be finished so we ended up living in there before it was fully constructed!” she says with a

laugh. It was 1979 and Monte Innes finally had his wife’s blessing to purchase the land he so frequently flew over and loved. “It took a while, but he finally convinced me that we should go down there and live,” she recalls. “The first thing that he did was he built this barge. Of course they brought everything out on that barge. It was Monte and this man, Harry, that built the pyramid.”

The two men built the entire home out of cedar. The very top of the pyramid

was outfitted with gold mirrors that, with the right sun, “would burn your eyes out!” Monte and Harry built a lookout tower just below the mirrors. “You could pull a staircase down from the master bedroom and go up to the lookout. From there, you could see all of Marco. He had such talent. Everything was beautifully built,” adds Judy. “We had a huge waterbed in the master bedroom and he had to add extra pilings to support it.” The entire back half was a floor to ceiling lanai and the “front yard” boasted over 2,000 feet of beach.

Without any power lines or water, they relied on alternative sources. When it came to this, “my husband was a genius,” states Judy. Monte built a filtration system to turn salt water into fresh water.

He also built a windmill as a partial power source and used the porches to catch water to drain into their cistern. He also built aviaries for Judy’s tropical birds.

So he decided to build me some aviaries and that was the birth of Birds Galore and I’ve had that business since 1980. That’s how I started breeding birds!” recalls Judy. Monte ended up building five aviaries to house all of Judy’s birds.

At the peak of living in the pyramid, she had toucans, African greys, finches and macaws, along with chickens, geese, turkeys, ducks, pheasants, peacocks, a black swan, skunks, emus, dogs and horses. “Every time I came home from Naples I brought something home with me that

The horses, however, were not that simple. “We had my two horses. Notice Me (Twiggy) and KoKo.” In 1979, they brought the horses over one at a time on a trailer placed on the barge. “We had horse jumps along the beach and we would ride them right into the water.” The horses lived on Cape Romano until May of 1987. “It was time for them to go,” Judy explains. The erosion of the beach began the year prior and the family felt it was no longer

safe for the horses to live there. “Marco Dock and Piling came out. We lifted them on a trailer with a crane and onto the barge.”

The horses moved to Judy’s property in Naples, but the family stayed on the island. Including Judy’s youngest daughter, Heather, who was in high school. “She took a boat back and forth to school every day.”

Heather would take a small power boat up the pass that ran along the back side of the house. “On the pass side it never eroded,” Judy explains. “The

reason why the pass disappeared is because all the sand from the Gulf went into the pass.” Once the pass became too shallow, they purchased a four-wheeler to drive back and forth to the west end of the island in order to go back and forth to Marco.

“When that erosion started, it just didn’t stop.” By 1988, the 2,000 feet of beachfront dwindled to the point of threatening the home. The family was also going through some difficult times.

Judy had an accident with her horse, breaking her shoulder. She wasn’t able to return to the pyramid home. Monte didn’t go back either. Judy hasn’t seen him since 1988. Heather returned to the island to care for the animals and slowly began to remove them. Many of them ended up at her mother’s property in Naples.

“You know what took the pyramid? A tornado. We sold the place to a couple from Ohio and the water was right

at the edge. They bought it thinking they were going to save it but before they even moved in a tornado came and took it. Monte always said, ‘nothing is ever gonna take this away!’ Boy were we wrong!”

After only ten years, the pyramid house became just a memory. Those who have been around long enough have faint recollections of being chased away by emus or seeing horses swimming in the ocean. For Judy, looking through the photos brings her right back to this former life. “I remember it all so clearly. There was hardship but it was wonderful. It was the best ten years of my life.”