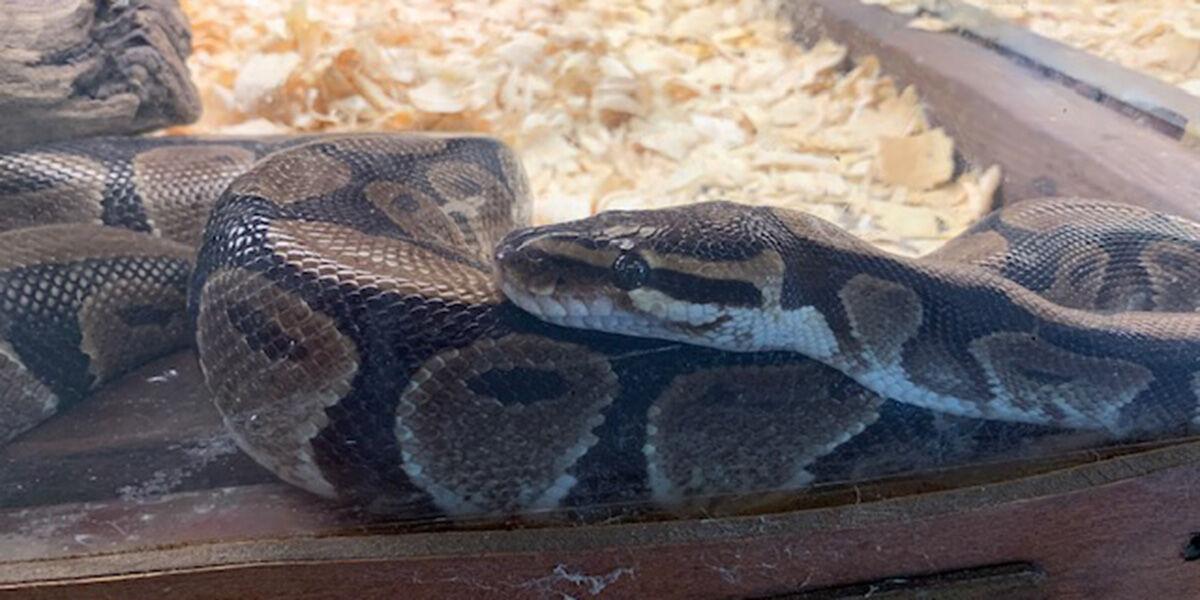 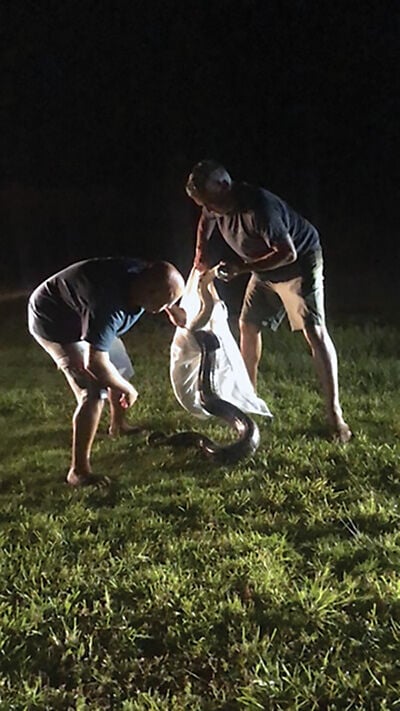 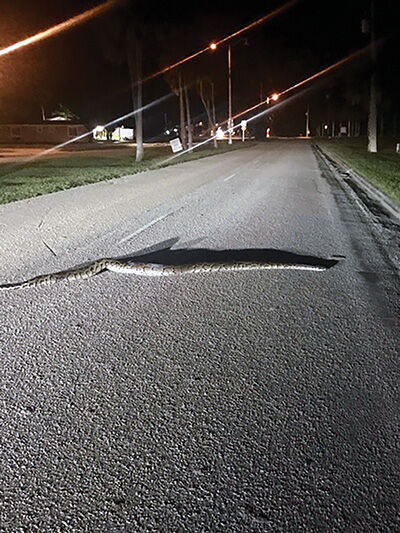 The python Bobby and Karen Campbell ran over the other night in Everglades City. 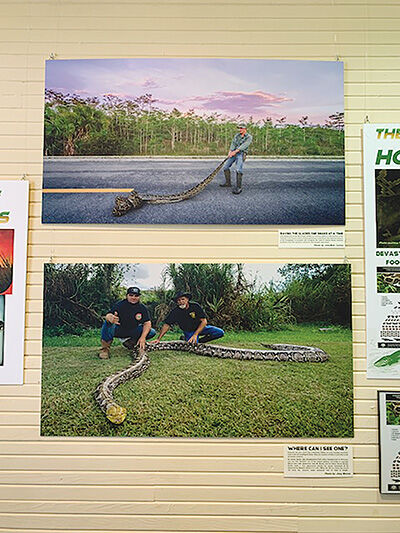 Photos from the snake exhibit at Museum of the Everglades. 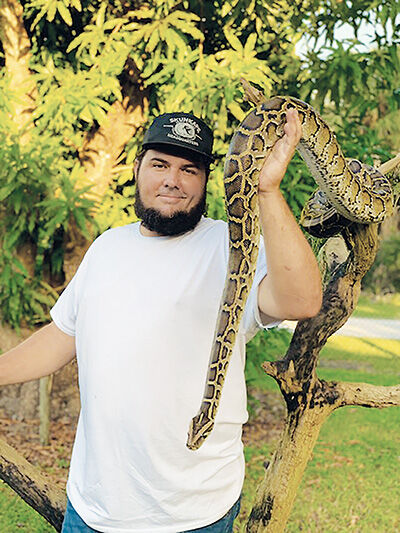 The python Bobby and Karen Campbell ran over the other night in Everglades City.

Photos from the snake exhibit at Museum of the Everglades.

Out of all the creatures of the Everglades, Burmese Pythons are one of the most recognized and known. Contrary to their popular image, these snakes are invasive to North America and impact Florida’s ecosystem in more ways than one. Their presence within the Everglades is highly concerning as they compete with the native wildlife for sustenance. This competition is leading to the decline of several mammal species within the Everglades National Park and Big Cypress National Preserve where Burmese Pythons have been established the longest. Some of the populations the Burmese Python has targeted and devastated include marsh rabbits, bobcats, raccoons and opossums. The snakes also target deer, wading birds and the occasional alligator.

The Everglades ecosystem is perfect for the snake population, as it is warm, muddy and a marsh, allowing them to survive with a large food base. Pythons have poor eyesight—therefore, they hunt by stalking prey using chemical receptors located in their tongues. These snakes additionally have heat sensors and flexible ligaments in their jaws, which allow them to catch and swallow their prey whole. Once their prey is located, they kill by constricting, clutching the victim with their teeth and coiling around the animal, squeezing until it slowly suffocates.

Burmese Pythons, Python Bivittatus, are nonvenomous snakes’ and part of the family Pythonidae, a family containing some of the world’s largest snakes. Their average lifespan while living in the wild is 20 to 25 years and their size ranges from 16 to 23 feet. Keeping their length in mind, these snakes can weigh up to 200 pounds or the size of a telephone pole. Their appearance is mesmerizing, as dark brown spots fit like irregular puzzle pieces against a tan background. Behind their eyes and on top plus below their head are dark–colored wedges that help to distinguish them from other pythons. These snakes tend to be unsocial, and both sexes are only seen together during their mating season occurring in the spring. Females can lay 50 to 100 eggs per year and are the general targets of hunters. Each female Burmese Python removed from the Everglades is a step towards protecting the native animals and removing the invasive species altogether.

These pythons were first introduced to the United States as exotic pets brought over from Southeast Asia. The 1980s saw an increase in exotic pet trade and households in Miami soon became home to thousands of Burmese Pythons, but because these snakes have the ability to grow up to incontrollable sizes, many owners irresponsibly released their snakes into the wild, causing them to end up in the Everglades. However, numerous experts claim that after Hurricane Andrew destroyed South Florida in 1992, Burmese Pythons were able to escape a python breeding facility and establish a population in the Everglades. In 2017, the SFWMD and the Florida Fish and Wildlife Conservation Commission announced the Python Elimination Program where people are hired to hunt for pythons in the swamps of South Florida. The program surprisingly has eliminated nearly 4,000 pythons in the wild, but this does not compare to their population still residing in the Everglades.

A few nights ago, Everglades City fireman Bobby Campbell and his wife Karen came across one after accidentally running it over while it was crossing the street near Island Café. They discovered after turning around to check on it that the snake was 12 feet long. Bobby and Everglades City Councilman Tony Pernas captured the snake and sent it to USGS where they open the pythons to see what they’ve been feeding on and record other statistics. Many of my friends have caught them on the side of the road or ran them over in order to decrease their population that’s killing our wildlife. I have yet to come across one in the wild, but I hope that one day I can catch one to admire their beauty and help save the Everglades ecosystem that I love.