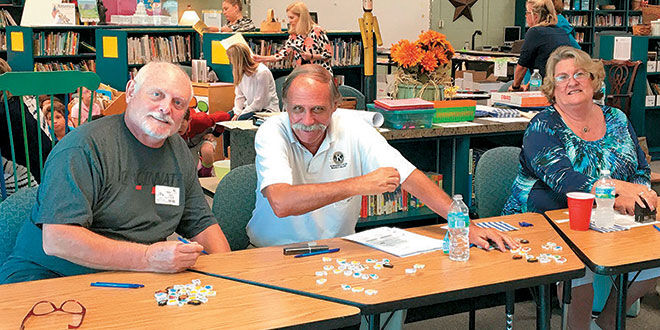 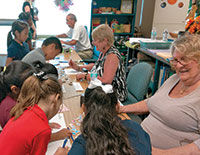 When Manatee Elementary School students jammed the media center it wasn’t for lunch.

They were hungry to read.

Some 750 students came in waves, by grades actually, to select a book that they will keep.

The Marco Island Kiwanis Club volunteers made sure they signed their books to give them a feeling of ownership. Kiwanians have been providing books for Tommie Barfield and Manatee Elementary schools for 16 years.

The originator was the Marco Island Pilot Club. Like Kiwanis, it was an organization that concentrated on children and families, said Diana Pagach, Kiwanis Reading Is Fundamental (RIF) chairman.

When the Pilot Club disbanded Kiwanis took over the RIF program.

A Pilot Club and Kiwanis member, Pagach asked and was approved to have the Kiwanians take it over.

At first it covered one-third of the cost while the federal government, through a grant, provided most of the funds. The government cut funds for the program about five years ago. Kiwanis

now covers all costs, which amount to about $7,000 a year, Pagach said.

Kiwanians go to each school twice a year to pass out 1,300 books each time.

Gayle Thawley, who has been coordinator for Manatee Elementary for many years, retired last week, with Marie McChesney taking over.

She sat in a little rocking chair, talking about the programs and incentives to read that come with the Kiwanis effort.

“I can’t tell you how enthusiastic the kids are and how school staff support the program,” she said. Principal Wendy Borowski has been in the background, making sure Kiwanians had what they needed for success.

For her efforts she got to speak before the Florida Legislature on how the students’ reading levels have been consistently improving. She too is a Kiwanian.

Over the summer the students will turn authors while writing their own books.

Jessie Owens, known for his historic victories in 1936 in Berlin, in front of Adolf Hitler.

The student saw a program on the Wax Museum and saw a replica of the African-American runner.

Thawley was a school teacher for 34 years and loves kids.

“They are my fixes,” she said. “I saw a need for the program and it has been my pleasure to see readings levels at the school improve. The teachers play a huge part in encouraging students to read.”

Early on she recalls a third grader selecting a book. “I said, ‘honey put your name in the book to take home with you.’ The student started crying, never having a book before. I said, ‘Here take two.’”

A young student stopped by, telling her, “Ma’am, you know the book you gave me. I read it every single morning while I wait for the bus.”