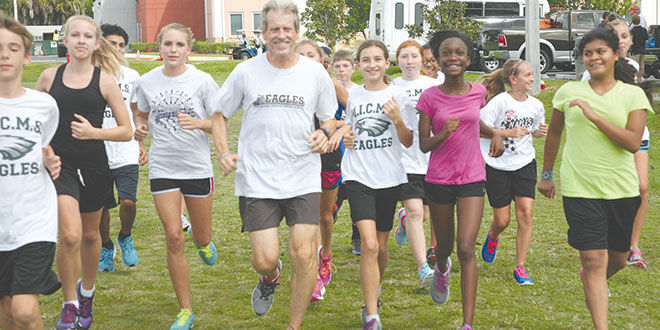 Raymond re-enacts the day he broke his leg on an early morning run.

On Sept. 12, Roger Raymond finished what he started exactly a year ago. He completed his normal run, something he couldn’t do on Sept. 12, 2013. He actually laid down on the spot where he sustained his serious injury. This time he got back up, finishing his run, instead of a trip to a hospital.

On Sept. 12, 2013, trying to get out of the way of an oncoming car, Raymond fell as he went into an alleyway along side Marco Floor Covering, just off San Marco Road on Marco Island. The result, Raymond broke his right femur in two places. A passer-by, Heidi Kallinich, heard his cry for help. She called police and Raymond’s wife, Karen.

Raymond was taken to Physicians Regional Collier where he underwent surgery that evening. He returned home on Sept. 16, where his therapy continued for a month. “I had no idea how bad it was or how long it would take to attempt a return to my running,” Raymond said.

He returned to work with the aid of a cane, which he used for five months. Raymond, who is the athletic director for Marco Island Academy and Marco Island Charter Middle School, tore muscle.

Possibly being a bit too optimistic, he tried running at the end of January. “I popped my sartorius muscle that told me it was too soon,” Raymond said.

Instead, he worked on an exercise bike, doing 10 miles a day. On June 1, he started running lightly, trying to work his way up to two

Sanders on going from outsider to dealmaker: 'It feels very good'

miles, far from a five-mile early morning run that he had done before the injury. For 3,954 consecutive days, Roger Raymond had laced his running shoes for an average five-mile run. It added up to 10.8 years and an estimate of more than 9,700 miles.

Raymond’s most significant change is the time of day he runs. The accident was just before the sun came up; now, he runs in daylight. On Sept. 12, his run began at 7:45 AM.

“You know I never realized when I was running that early on Marco beach how many small holes I must have missed,” he said. He also brings along his cell phone so that he can call someone if, forbid, another accident occurred.

During his streak, he ran some 400 races, including 10 marathons, three in Boston and once each in New York and San Francisco.

“I have been asked how I am so many times it is overwhelming at times,” he said. “I did not realize how many people followed my running streak and my Boston Marathon races.”

He’s far from considering those types of events. His goals include surpassing two-mile runs then maybe a 5K.

Raymond, 63, added, “Right now I am not thinking about a marathon. I am much more aware of my body, understanding that I need to be more careful.”