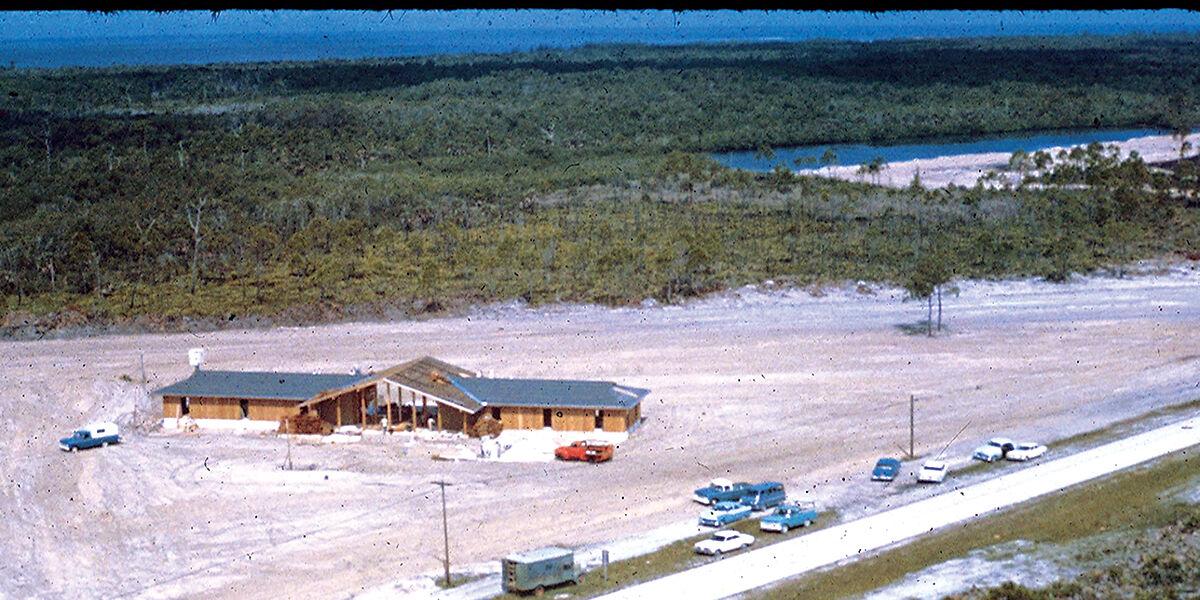 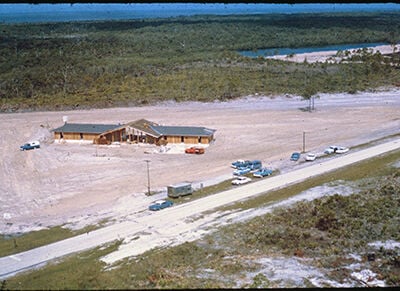 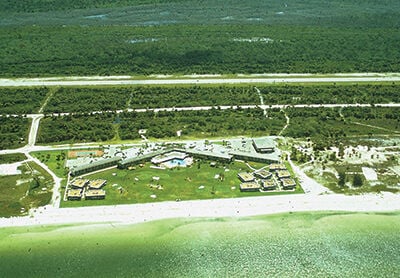 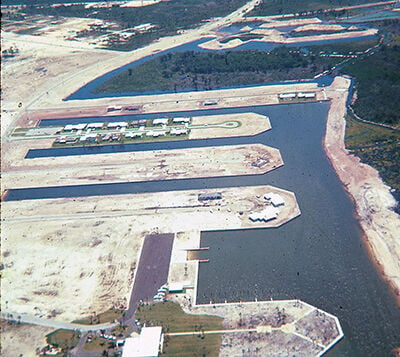 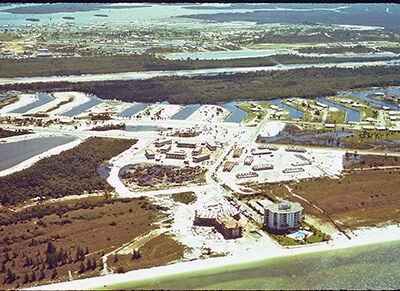 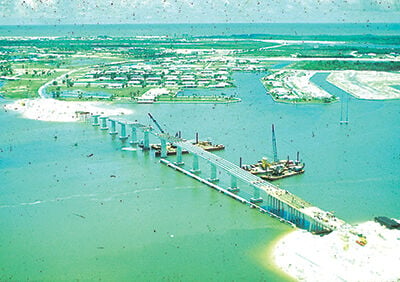 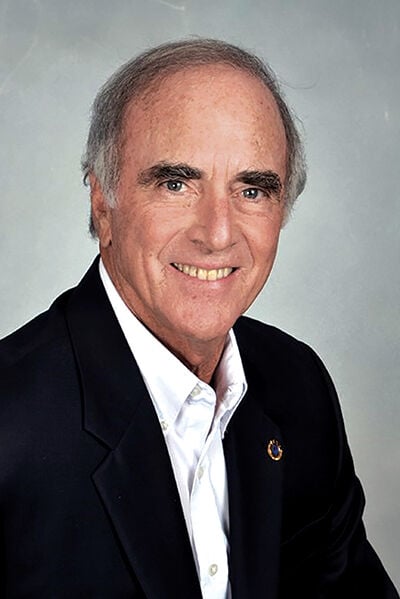 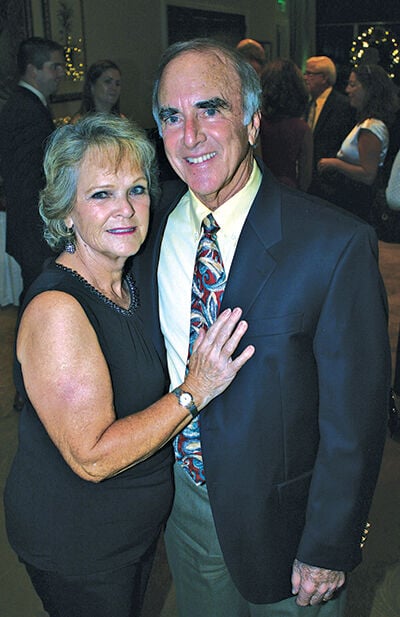 All of us have great recollections of where we were in the summer of 1969. That year would mark the historic events surrounding the successful moon landing by the crew of Apollo 11. Some would be settling into new offices at 1600 Pennsylvania Avenue in Washington D.C. after the swearing in of newly-elected President Richard Nixon.

Others of my age would be sweating and dying in the swamps of Vietnam, while many others would be enjoying a music festival on Max Yasgur’s 600-acre dairy farm in Bethel, New York.

It was on July 4, 1969 that 27-year-old Marv Needles and his wife drove over the swing bridge in Goodland to come onto Marco Island. The $1.5 million S.S. Jolley Bridge, which spans 1,595 feet over the Marco River, was not opened until December of 1969. The bridge originally cost $0.40 per vehicle to cross the bridge and was later reduced to $0.20 per vehicle. Ten years after the opening of the bridge the tolls were eliminated altogether.

Like many of those that came early to Marco Island, Needles initially was employed by Deltona Corporation as a gopher, doing anything and everything they instructed him to do. He would work in that capacity for about a year, until he acquired his real estate license and began selling homes for Deltona for the next year and a half.

Available inventory on the island was about sold out and Needles was busy selling undeveloped plots just across the new Jolley Bridge, in an area known as Marco Shores. That area was completely different than the Marco Shores that exists today. It was just north of the Isle of Capri Road on the west side of 951. A temporary road known as New York Avenue was constructed and a configuration similar to Marco Island was laid out doing another dredge and fill operation with homes on the water and access out to the Gulf of Mexico. In fact, Needles had originally purchased a lot in that area prior to the intervention of the Army Corp of Engineers who basically shut down further expansion of the Mackle Brothers’ plans.

Needles left Deltona later in 1971, and hung his real estate license with Johnnie Gantt Realty. It was located on Bald Eagle Drive with the office as part of Kelly Gantt Islander Motel, which Johnnie’s husband ran and provided dockage for fisherman, bait and rooms. It was located near what is today known as the Riverside Club. He worked there for two years as he was doing an internship to earn his Brokers License, but with Gulf Island Realty under Virginia Kingsford, which was located where Moore Roofing is today.

After receiving that coveted Brokers License, Needles quickly shifted into high gear. During his adolescence he was accustomed to his family moving around. As an adult, he didn’t want that type of life. Instead he sought out “roots” for himself and his family, which would come along. He felt Marco Island was the right fit and provided many of the incentives he was looking for, like being on the ground floor of a great opportunity given all of its positive attributes.

Needles, who opened his own office, Flagship Real Estate, in late 1973 in a small 430 square foot space in Old Marco, is the first to admit that his timing could have been better. The oil embargo by the OPEC producers couldn’t have come at a worse time for the real estate industry. Needles, however, wouldn’t let that deter him and instead doubled his efforts to survive the downturn in the market.

He threw himself into a number of the local organizations to assist growing the community in a positive way. He became one of the founders and the first President of the Marco Island Chamber of Commerce in 1975. Prior to that, Marco businesses belonged to the Naples Chamber, but after forming its own organization would soon spin off and become an independent group.

In 1982, Needles received the prestigious award of Realtor of the Year and would repeat that honor in 1986. In 1984 he served on the local YMCA Board of Directors and as its President.

His firm would eventually expand into rentals and opened additional locations on the island. In 1990 he would establish Flagship Home Builders. Needles saw a need to provide for more affordable homes for families at middle income levels, often referred to as “bridge housing.”

“Marco had that need to provide homes for the working class families and we tried to fill that void. We would also build some of the other larger, more expensive homes as those opportunities arose,” said Needles. In the decade that Flagship Homes was active in the building business, they constructed 175 residences on the island.

When Marco Island decided to incorporate and become its own political entity in 1998, Needles was appointed to the Marco Island Planning Board, which he would proudly serve on until 2013.

He served on numerous other organizations and local community boards over the years, but none gave him more satisfaction than his work in the planning aspect of ensuring that the island had a solid foundation regarding its vision for the future.

Phil Wood, of the John R. Wood Realty Group, a very well-respected high-end realty company out of Naples approached Needles in early 2017. Needles knew the entire family and the respect was mutually held. They wanted to participate in the Marco market in a high-class way and they wanted the prestige of having one of Marco’s longtime respected brokers to head that effort.

Needles said it wasn’t so much a tough business decision, but a personal one that dealt with letting go of what he had built from the ground up. His children Scott Needles and Stacy Needles Witthoff, having joined Marv at Flagship in 1999, found success in selling real restate and didn’t want the responsibilities of managing an office.

Needles closed Flagship Realty in 2017, and after a short hiatus, joined many of his former staff and sales-people at the John R. Wood offices on Marco. He has never looked back, but continues to apply those no-nonsense principals regarding work ethics and drive, which served him so well over the last 50 years.

If you ask Needles what the greatest challenge is facing the community, he hesitates. “If you think about it there isn’t a whole lot of changes to be made; while the city has its challenges, Marco Island is a wonderful place for all ages,” said Needles.

What was his greatest accomplishment? “Having the pleasure of knowing that Jayne and I had the wonderful opportunity to bring up our children in such a great community,” said Needles.