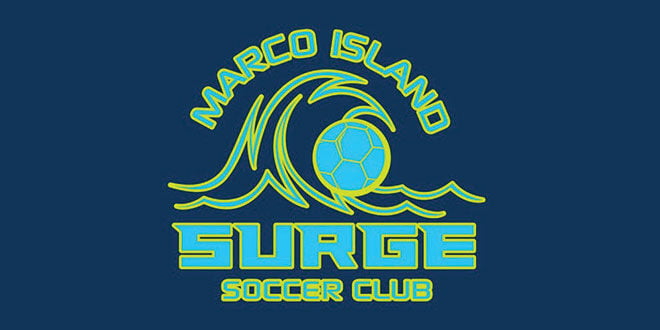 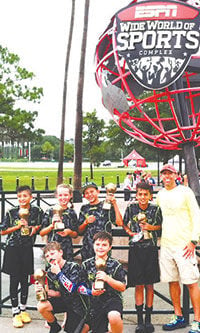 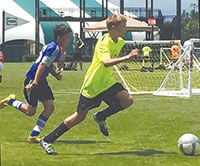 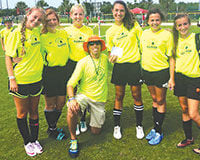 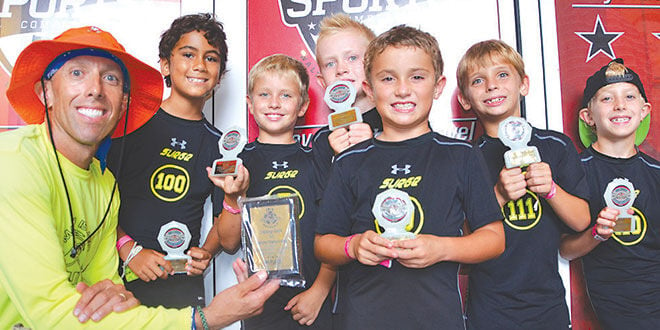 In July, Disney World puts on their annual 3v3 tournament in its ESPN Wide World of Sports facility in Orlando. It is a national tournament with each team bringing six players. They range in ages from Under 6 to Adult. This year the tournament was held on July 31, August 1, and August 2. As they have done for the past several years, Chad Chustz (pronounced “shoots”) and Jim Watt, assisted by Dave Vergo, took some of our local kids up to compete. Chustz has his hands full with the Under Sixes (U6’s), while Watt and Vergo coach the U9’s, U12’s and U15’s. The teams operate under the aegis of Surge, the Marco Island Soccer Club.

Jim Watt is the varsity girls’ soccer coach at Marco Island Academy. He takes no pay for this. He is the national sales manager for a family lumber products company headquartered in Ohio. When not coaching, he is traveling to client sites or running the sales department from a Marco office. He manages his work schedule so as

not to miss practices or games with his teams. Dave Vergo is the owner of Accurate Air Conditioning, with offices on Marco Island and Naples. Chad Chustz is the past director of soccer for the Optimists Club, and is currently the president of Surge, the Marco Island Soccer Club. He works for Island Trends, and is in charge of internet marketing. Watt, Chustz and Vergo have seven of their kids playing on the entered teams.

Including the teams and accompanying families, about 50 Marco Islanders made the trek to Orlando. They stayed at the Holiday Inn at Disney World, arriving Thursday and leaving on Monday. One can only imagine the pandemonium after the kids checked in and took over the place. The teams were mostly from Florida, but there were teams from Georgia and Texas as well.

The games started on Friday and concluded on Sunday. Alarms were set for 5:45 each morning; games began at 8:00 AM, with the last games at 3:00 PM. Each of Marco’s teams played a minimum of 6 games.

run much as the recent Women’s World Cup. Participating teams in each age group played 4 pool games (playing all teams in their group), after which they were seeded for the 4 single elimination games. Each age group could compete in one of two divisions – the Recreation Division (RD) and the Competitive Division (CD). The RD is for those teams who come from informal public park settings. They practice when they can, and are coached by mostly parents. Any kid who shows up is likely to play. The CD is for club teams, with hired coaches, tryouts, and a rigorous regimen of practice and competitive game scheduling. Some of the games were back-to-back or simultaneously on different fields. Watt, who is the sole coach of the kids back at Mackle Park, couldn’t have pulled this off without the coaching assistance of Dave Vergo. The teams are further divided into both girls and boys teams. Girls can play on a boys’ team, but not vice versa.

Chustz’s U6 team came in fourth in a field of

15. They played 7 games and received trophies for their high finish. The players were Justin Martinez, Evelyn Vizcaya, Aiden Chustz, Tyler White and Mario Guzman. I have watched this group practice and often wondered at Chad Chustz’s patience with these little guys with such short attention spans.

Watt and Vergo’s U9 team competed in the Recreation Division. They got fourth place out of the 8 teams competing. This group consisted of Nick Gionet, A.J. Hobbs, Lucus Chustz, Lincoln Labutte, Jake Watt and Alex Macko. Jim Watt was pleased with how much this group grew as a team during the tournament. These youngsters were awarded trophies which glowed in the dark. The boys lugged these around everywhere they went, reminding passersby of fire flies flitting about.

The U15 team consisted of Elizabeth Schultheis, Julia Wagner, Olivia Watt, Kayla Kladis, Miranda Webb and Morgan Jones. Schultheis, Wagner, Watt, and Kladis will be sophomores at MIA. They started on MIA’s girls’ soccer team as freshmen last year. Webb and Jones are incoming MIA freshmen. These U15 girls should be

the core of a pretty good MIA varsity soccer team this year. I know; I watch them practice. They competed against 6 other teams in the Recreation Division. They came out of pool play seeded first, and were able to walk off with second place for the group. This is a tight group of girls. They have formed close and lasting friendships. There is no quit in this group.

For Watt, the biggest surprise of the tournament was his U12 team – Armando Anaya, Kevin Jungo, Jonathan Watt, Matthew Vergo, Nicholas Vergo and Kirra Polley. Jonathan Watt is an outstanding athlete by any measure. I have seen him play soccer and basketball. For the prior 3 years, his teams had won the Recreation Division. This year, Watt decided to enter this team in the Competitive Division. Remember, the CD consists of club teams, with hired coaches, regular practices, and a grueling schedule of games against other club teams. Watt practiced for this tournament only four days in advance. All three of his teams ran drills and

practiced together at Mackle Park under a blazing sun. The practices lasted two hours and the kids never slowed down. As the only coach present, Watt could not spend a lot of individual time with each team. He had to mix and match them so that all got playing time with teams consisting of all age groups and genders mixed up. During the two hour practice sessions, the only breaks Watt got was when he had to take a business call on his cell phone. Running a national sales department usually takes second place to his soccer teams. Watt invariably conducts his business so as not to interfere with soccer practice and games.

Before the first tournament game, Watt reminded the U12’s that they would be “going up against really good players, but not necessarily good friends.” Because of that, he said “they were likely to fold when things started going against them.” Some of Watt’s U12’s had been playing together since they were six- and seven-years-old. He reminded them that they were close friends and

would have each other’s backs no matter what happened out there.

The U12’s came out of pool play seeded third. They lost only to Vanish, a Miami CD club. They went on to the single elimination against the number two seed, Vanish, which they beat 9 to 5. The final was against the top seeded Real Madrid, from Cape Coral. Everything clicked at just the right time for our U12’s. Passes were perfectly executed, shots squeezed in from all angles and the defense was stout. The final score was 11 to 6. As Watt had anticipated, the cohesiveness of his U12’s wore the other team down.

A couple of days later, I ran into Nick Vergo at the hardware store. It wasn’t hard to get him to talk about the tournament, once I got him started. His face lit up with pride when describing the U12’s accomplishment. He reminded me that this was a national tournament and that the Marco U12’s had won the toughest division in their group. “I guess that makes us the best team in the U.S.” said Nick. Who can argue?