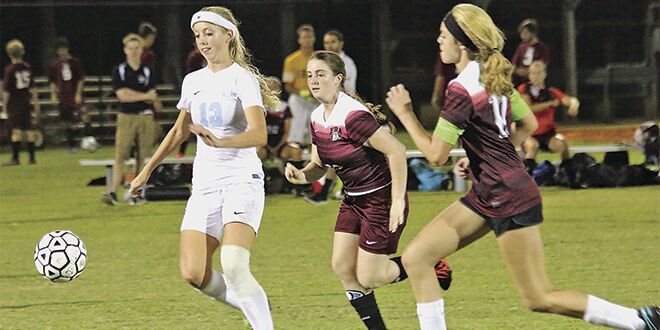 Olivia Watt breaks through the First Baptist defense and surveys the field for her next move. 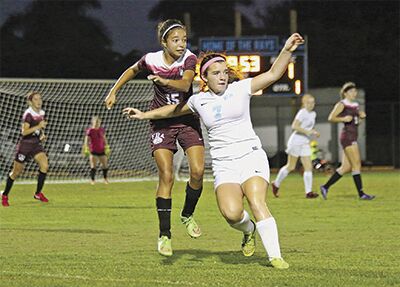 Photos by Jenny CartwrightLauren Faremouth on offense. A stalwart on defense, this precocious freshman is also an offensive threat because of her accurate booming kicks. 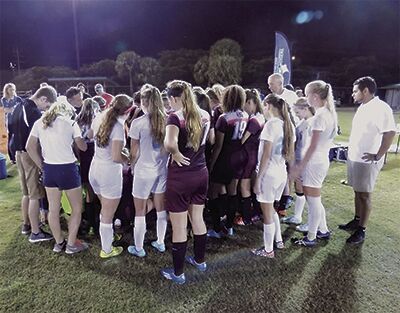 Photo by Barry Gwinn:First Baptist and MIA join in a postgame prayer for the quick recovery of the injured MIA players.

On December 20, in their last game before Christmas break, the Marco Island Academy (MIA) girls soccer team (8-6-1) stood toe-to-toe with First Baptist Academy (12-2) the division’s second ranked team, and gave as good as they got. This action-packed game was witnessed by over 50 spectators, an unofficial record crowd. The final score was First Baptist Academy (FBA) 4, Rays 1, but it showed the Rays’ toughness in facing off against a team which had only lost twice, both times to Evangelical Christian (14-0), the division leader.

The game was rough and played hard by both teams. Kayla Kladis was knocked out of the game late in the first half, after colliding at full speed with an onrushing FBA midfielder. Both were going for the ball, which was heading for the goal. Kayla got there first but had to be carried off the field. Danya Zarate, one of MIA’s top scorers, had to play the rest of the game in goal. Early in the second half,

Ted Cruz: Critical race theory is as racist as Klansmen

Lexi Harrington, who had scored the Rays only goal on a nifty corner kick by Lauren Faremouth, and who seems to be everywhere at once on defense, had to be carried off the field after twisting her ankle. She was out for the rest of the game. Olivia Watt, the Ray’s gutsy midfielder also limped off with a twisted ankle, but was able to return. Despite the injuries, the Rays hustling defense once again kept them in the game. It was 2-0 at the half, and 3-1 with just five minutes to go in the game. During the entire game, center midfielder, Olivia Watt was pestering the First Baptist defense with a salvo of shots on goal precise passes to MIA’s offense. Watt is, by design, in the middle of everything and often is the also the first to break up an opponent’s attack.

Once again, the girls left it all out on the field. “First Baptist was one of our toughest games of the year,” said Coach Watt,

“They were tough and aggressive, but I feel like our girls rose to the challenge. We impressed the FBA coach enough that he came up to me after the game to compliment our game and improvements from last year.” Coach Watt took satisfaction in that the Rays goal came off a previously drawn up corner kick. It was a perfect execution of the play, he said. Freshman Lauren Faremouth makes all the team’s corner kicks and sends most of them into the crease of the opponent’s goalie. She is also able to bend an occasional kick towards the goal itself.

Next up for the Rays is a return bout with FBA (at FBA) on January 6, too late for this edition. Coach Watt will hold practices over the break specifically to prepare for this game. “I think with a revised strategy, we can compete,” says the glass half full coach. Boy can they compete! There is only one more regular season game after that, at home, on January 10, against Community School.