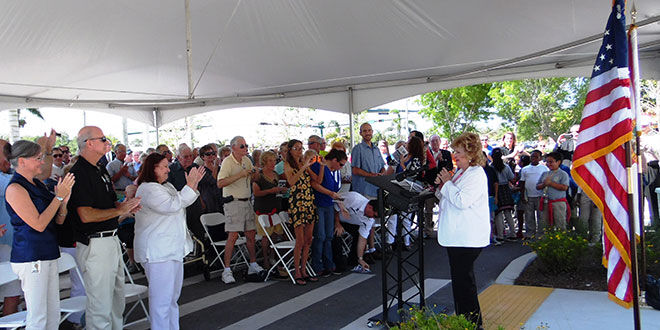 Collier County Commissioner Donna Fiala receives a standing ovation before a ribbon cutting ceremony at the new Donna Fiala Community Center at Eagle Lakes Community Park on May 21. Located off U.S. 41 in East Naples, Fiala had fought for the construction of the center for more than 10 years. 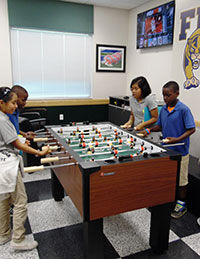 Students from Parkside Elementary School wasted no time in trying out foosball at the Donna Fiala Community Center that opened at Eagle Lakes Community Park on May 21.

Collier County Commissioner Donna Fiala received a standing ovation as she came to the podium at the opening of the Donna Fiala Community Center on May 21 at Eagles Lakes Community Park off U.S. 41.

The center had been on the commissioner’s bucket list for more than 10 years. She got to scratch it off in style. For her efforts, a petition to name the center after her was successful.

Family, friends and government officials all made the day special for

the once young lady coming to Naples from East Cleveland, Ohio.

One speaker described Fiala as most competent, and stubborn, which brought a laugh. Stubborn enough not to wilt under pressure to see this needed project through.

“This facility was desperately needed,” Fiala said. “I can see this center bursting with children.”

The $2,248,000 center sports a fitness center with various exercise equipment and locker rooms, an early education center, a game room with popular kids’ games, a kitchen and an expansive meeting room

that served as the reception area for a crowd of some 300.

The building brings the opportunity for preschool and afterschool programs, along with summer camp programs, for the first time at the park that was developed in 1997, mostly for baseball and soccer.

“With the number of people who use the park, we need a swimming pool, like other county parks have,” she said. “That need won’t go away.”

And neither will Fiala. She is determined to scratch off another bucket list item.