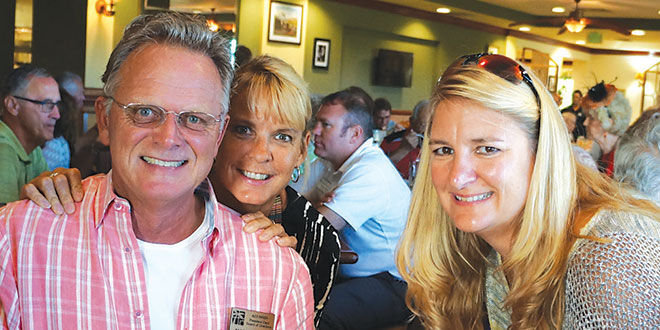 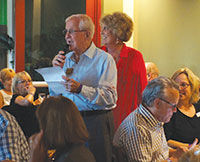 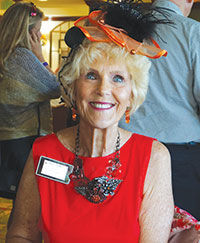 On October 21 islanders left the rock to attend the Marco Island Chamber of Commerce After Five Networking Event at Erin’s Isle Restaurant and Irish Pub in Naples.

The monthly networking event allows guests to mingle and hand out business cards while socializing at a local venue.

Ninety-one guests were in attendance, according to Sandi Riedemann, Executive Director of the Marco Island Chamber of Commerce. She says, “Erin’s Isle always does a nice job. Everything was delightful.” Erin’s Isle opened its dining area and treated guests to a lavish buffet. Fresh roasted turkey and pork, raw oysters and jumbo shrimp were just a few of the treats guests enjoyed.

New members were introduced and welcomed by Dick Shanahan, chamber president. One of the newest applicants looking

to join the chamber is Marco Island Pharmacy, a community pharmacy and medical supply, which will be opening soon at 915 N. Collier Boulevard. Owners German Jaime and Kelly Rojas moved to Marco Island from New Jersey, where they also run a pharmacy and medical supply company. The business owners tell me that they are “excited to be here” and that they are looking forward to “getting to know the community more.” The two had put in their application to join the chamber only the day before the event. Chamber membership will allow them to “support local businesses and meet people from the island” Kelly says.

Mediavine Partners with PFLAG National to Uplift the LGBTQ+ Community with PSA Campaign to Run Across Mediavine's 8,000-Independent Publisher Network

Also present was Alex Parker, chamber president-elect. Alex tells us that he “looks forward to working with the exceptional board” when he

begins his new role at the end of January 2016. We asked him what the next year may hold for the chamber, and he replied “Everything happens for a reason. I am looking forward to next year to see what that reason is.”

Upcoming chamber events include the 1st Annual Craft Beer Fest on Saturday, November 7 from 1–4 PM, hosted by CJ’s on the Bay at the Esplanade, 740 N. Collier Boulevard. Jacquie and Curt Koon, CJ’s owners, told us that the Craft Beer Fest was one of the many events and “future activity to be excited about” on Marco Island.

For more information about the Marco Island Chamber of Commerce, the 1st Annual Craft Beer Fest and other upcoming events, go to the chamber website at www.marcoislandchamber.org or call 239- 394-7549.