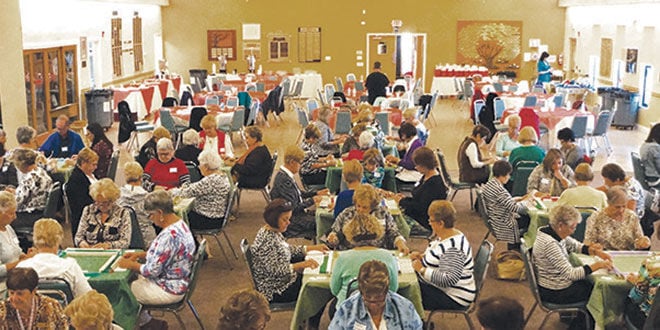 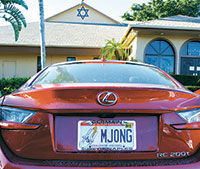 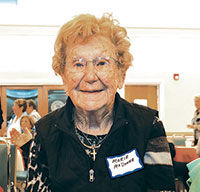 How Mah Jongg became so popular is a mystery, unless you’ve actually played the game.

Mah Jongg is unlike other common group games, like canasta and bridge- where even if you are not a player, you “know” the deck of cards. In Mah Jongg, the 144 exotic tiles are likely unfamiliar to you- unless you play. And once you start playing, you quickly realize that besides being a fun social activity, it is a great way to keep your mind sharp.

None of this is news to the ladies at the Jewish Congregation of Marco Island (JCMI). Coastal Breeze spent some time at their recent Mah Jongg tournament, watching, taking note

The Mah Jongg Tournament ran strong from 9 AM to 3 PM. The 84 players, one (brave) man with 83 women, played five one-hour rounds, only breaking for lunch at noon. While poking around near the kitchen (memories of Deli Fest still fresh), we spied the JCMI chefs, who prepared a delicious lunch of chicken Caesar salad for the players.

Co-chairs Carole Kendall, Judy Sacher and Roberta Schwartz organized the well-attended event. There were door prizes, donated by many generous local businesses, and a 50/50 raffle, which was won by a lucky Diane Tamagni.

The tournament drew the serious players to the JCMI. In the parking lot we spied Phyllis Bouchard’s Lexus, a gift

from her husband, along with her perfectly fitting license plate: MJONG. Phyllis clearly loves the game, and she has been playing it since 1974. She placed an impressive fourth in the tournament.

Many of the players had decades of experience. Marie MaDonna said that she too has played Mah Jongg “since the 70s.” It was a surprise to learn that Marie is 98-years-old. Still actively playing Mah Jongg, Marie has a regular group – allowing her to socialize with friends while exercising her still-sharp mind.

Although the Mah Jongg Tournament brought out the area’s experienced players, all level players are welcome at the JCMI every Thursday. And who knows, with enough practice, you could be

Mah Jongg in a Nutshell

Originating in China, Mah Jongg is a four-player game similar to rummy. It is played with a set of 144 tiles, which are decorated with Chinese characters and symbols. The tilesí three suits are bamboo (sticks), dots (wheels), and cracks (numbers).

Mah Jongg is played in hands, with a minimum of four hands to make up a round, and four rounds, a game. Players begin with 13 tiles and take turns drawing (and discarding) tiles until they complete their hand of 14 tiles (going Mah Jongg).

Although it is a game of skill, using strategy and calculation, it still involves some degree of chance.