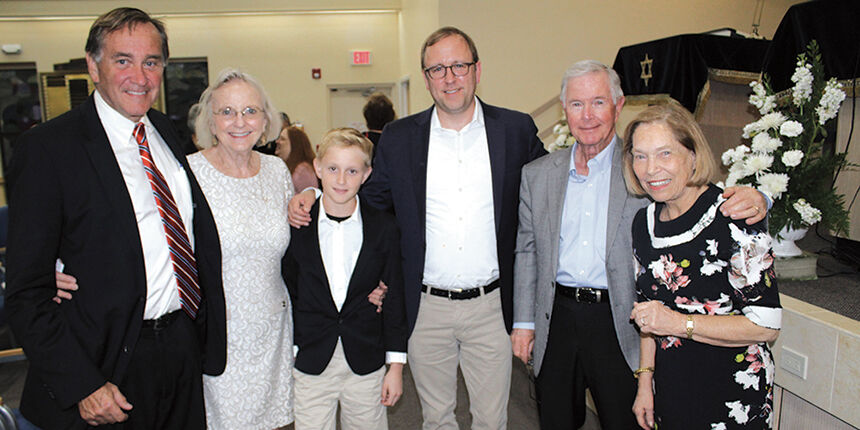 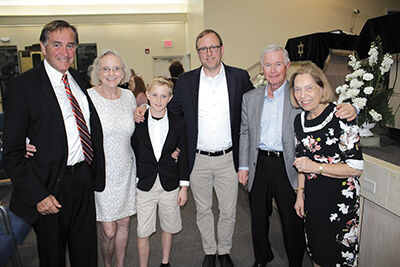 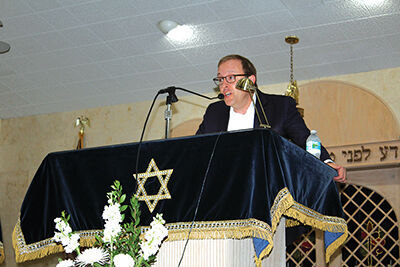 Covering President Donald Trump and his administration is a chaotic, norm-shattering, challenging-on-multiple-fronts experience for reporters handling the White House beat.

A glimpse into that journalistic world was provided recently by Jonathan Karl, chief White House correspondent for ABC News, during a presentation at the Jewish Congregation of Marco Island. Karl’s appearance kicked off the 25th season of the JCMI’S The Saul I. Stern Cultural Series.

Karl is a regular presence on the network, appearing on ABC News, and reporting from White House grounds and often from the West Wing’s James S. Brady Press Briefing Room.

The Trump Administration is the fourth he’s covered as a tele-journalist, first for CNN and now, for ABC. The title of his remarks, “Washington Turned Upside Down,” neatly summarized his perspective on the governmental climate in Washington, D.C.

The continuing, topsy-turvy experience began with Pres. Trump’s campaign, which Karl said, “turned everything I thought I knew about politics upside down.” It’s an environment that Karl, who has family on Marco, was glad to exchange for an island respite.

Preceding his remarks with thanks to event organizer Sue Baum and JCMI Rabbi Mark W. Gross for the invitation, he then thanked everyone “for getting me out of Washington for a couple days.” He cited the weather as one plus of the visit, along with it providing “an escape from the insanity of Washington, D.C., a place where they say that those who travel the high road never have to worry about much traffic.”

Karl’s presentation touched up a wide range of hot-button topics, including the challenges of covering the Trump administration, a free press’ role in a healthy democracy, the dangers of the president’s war with the national media, and the importance of impartial and objective reporting.

As Karl described it, the events of inauguration day, Jan. 20, 2017, got things off to a remarkable and tone-setting start, historically. Citing the mutual contempt that Pres. Trump and Pres. Obama had previously expressed for each other, they nonetheless followed tradition and shared a ride to the Capital for the swearing in ceremony.

The title, tenor and positions of Pres. Trump’s inaugural address were also out of the norm.

“‘American Carnage,’ a speech unlike any other we’ve heard in inauguration history, which is usually lofty rhetoric, talk of coming together,” said Karl, while noting that past presidents and their wives, and Congressional leaders from both parties sat nearby as the president spoke. “Trump’s speech; man were they uneasy because this was basically an attack on all them, Democrat and Republican alike. This was, ‘We are going to turn the tables. This is it, a whole new day here.’”

But that “new day” did not equate to smoothness, either in the transition from one administration to another, or its aftermath, explained Karl.

“There’s a reason why there’s been so much chaos, and you saw it there in those first few hours, is because there were so few people who had been part of the executive branch before or who had even been a part of politics before,” he said.

He said former White House Press Secretary Sean Spicer was among the most experienced and his background was limited to working for the Republican National Committee when the Democrats controlled the White House and before that, as a mid-level Congressional spokesperson.

Throughout his professional life, Donald Trump has sought out and reveled in publicity, good or bad, and was traditionally, very accessible, said Karl, who has known him since he was a young reporter with the president’s favorite newspaper, the New York Post. But the president doesn’t seem to have an understanding of or an appreciation for the First Amendment and of the free press’ role in a democracy, he added.

As evidence, he pointed to Pres. Trump’s call for changing libel laws so reporters can be sued for stories he doesn’t like, punishing newspaper publishers and authors who criticize him and his provoking of supporters at rallies to taunted and jeer reporters there to cover the events.

“It can be pretty intense, and it’s become more so,” Karl said of the rallies. “You’re there and you’re surrounded and he’s talking about how you’re basically evil, bad, terrible, disgusting, enemies of the people. When you’re faced with that, being basically called a traitor, an enemy of the people and terrible human beings, you’re tempted to fight back. I mean, I’m a reporter. That’s not my role. I’m supposed to be observing these political fights and not being a party to them, but it’s tempting because the core of what you do is being attacked.”

He said fighting back is justified and important, in some cases, such as correcting the record when Pres. Trump declares factual stories to be fake news.

Throughout U.S. history, it’s been common for presidents to be at odds with national press, some even making their displeasure known in writing or speeches, said Karl. But their unhappiness pales in comparison to the vitriol expressed to the media by President Trump, he added.

But Karl cautioned that reporters need to ensure that the highly charged environment doesn’t cause them to lose their way, give in to emotion and deviate from the tenants of good journalism.

“Our job is to report the news, to ask tough questions and attempt to hold those in power accountable by shining a spotlight on what they’re doing,” he said. “We are not the opposition. In the Trump era, I would argue, too much of the press has often appeared like the opposition. That’s fine for opinion journalists and editorialists,” he said. “But I still firmly believe that there is a crucial role, maybe more crucial now than ever, for reporters and news organizations that strive for objectivity and balance. Our opinions should be irrelevant. Even when the person you’re covering treats you unfairly, even when he brands you disgusting or a traitor or fake, as a reporter you should strive to treat that person fairly. It’s not about us.”