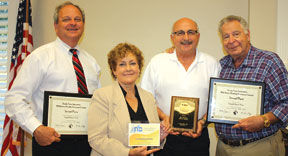 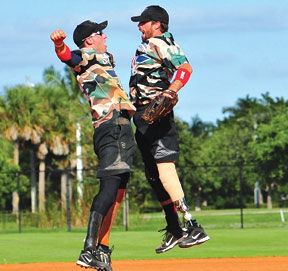 Victoria Wright received second place from the AFCP for this photo of the WoundedWarriors.

Victoria Wright received second place from the AFCP for this photo of the WoundedWarriors.

For the past three years, Coastal Breeze News has been delivering a ‘Fresh Perspective’ to Marco Island and its surrounding areas. The Association of Free Community Papers and the Florida Press Association agree. Thanks to the talented work of columnists, editors, photographers, graphic designers, sales and office staff, the

Coastal Breeze has received eight awards between these two associations. Two awards garnered general excellence for the paper and six individuals received recognition for their talents.

The Florida Press Association, which is open to all newspapers in the state of Florida, granted awards to three contributors to the Coastal Breeze, honoring works from 2011.

Graphic designer, Karen Garcia, took third place for Front Page Design. Judges were won over by the, “Color, color color and much sweetness.” They remarked, “ it makes us want to know this community better.”

Humor columnist, Monte Lazarus, received second place for his article, “How to be Admitted to the ER Without Really Trying.” For his efforts, judges commented, “a humorous look at a very serious matter that’s probably all too true. Nicely written.”

Craig Woodward received second place for his Coastal History article series, “Are You a Marco Old Timer?” His three-part series tested local knowledge and challenged readers to turn in their answers. Coastal Breeze readers generously sent in answers forms in hopes to reserve the title of “Marco’s Oldest Old-Timer.” Judges thought, “What fun! This collection of community historical questions and answers is fabulous.”

The Association of Free Community Papers, a national newspaper trade organization, also granted four awards to Coastal Breeze News at its 2012 Best of the Best Global Summit Awards in Atlanta.

Original Color Photography used in a Feature or General Interest Story. Her cover photo shot featured the Wounded Warriors softball team; amputee veterans from post-911 wars. The team came to Marco Island in a charity event, competing against Marco’s Fire Rescue and Police Departments and All-Stars from the Parks and Recreation softball teams.

Tarik Ayasun won first place honors by the AFCP for Best Original Writing – Opinion. His article, “Che Guevera, Angela Davis, Coastland Mall and Beyond…” took a look at people watching and how, “everything seems to change over time but nothing really changes.”

The AFCP also awarded Coastal Breeze with third place for General Excellence for the entire paper for the edition published on October 7, 2011. The cover photo, by Victoria Wright, featured men racing out of the water during the Island Fitness Challenge Triathlon. The cover also featured a story on “Bras for Life,” a charity event for the local chapter of the American Cancer Society.

Which brings about the Coastal Breeze’s final award. The AFCP awarded the Coastal Breeze first place for Newspapers Fighting Cancer 2012. “To me, it is the most meaningful award because it was open to all newspapers across the country,” states Coastal Breeze Publisher, Val Simon. “It’s special because it celebrates a cause that is near and dear to all of us. We are so very proud, as an organization, to have received this award for our cancer awareness efforts.”

Coastal Breeze is proud of all the hardworking and dedicated staff that help to produce this award-winning paper. A special thanks goes out to all the readers, advertisers and supporters who have helped this grass-roots effort take off. Coastal Breeze will continue to deliver excellent local coverage with the ‘Fresh Perspective’ our readers have come to know and enjoy.