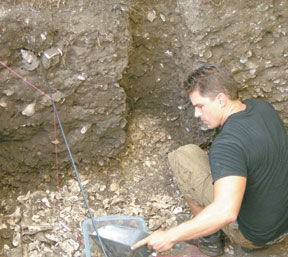 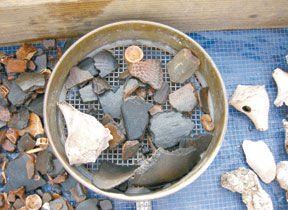 Assorted pottery shards and shell tools are cleaned and sorted at the Historical Museum. 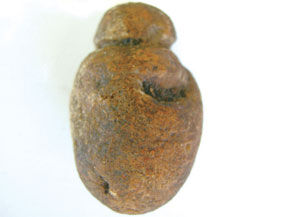 Known as a plummet pendant, this piece is carved from limestone. 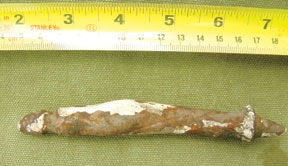 This decorative pendant is made of the inside of a horse conch.

Assorted pottery shards and shell tools are cleaned and sorted at the Historical Museum.

Known as a plummet pendant, this piece is carved from limestone.

This decorative pendant is made of the inside of a horse conch.

The Caxambas community of Marco Island has seen its fair share of construction this summer. As the sewer project continues in the area, Advanced Archaeology, Inc. of Fort Lauderdale has been tirelessly digging ahead of the construction in an effort to unearth mysteries of Marco’s ancient ancestors.

Coastal Breeze News caught up with the archaeologists who shared their initial findings in the cover story of the June 28 edition. Nearing the half-way mark of the project, Joe Mankowski, President of Advanced Archaeology, Inc. and Field Director, Gene Erjavec have now uncovered thousands of artifacts in only three small test sites.

Back in June, the archaeologists were merely scratching the surface of their first test site on Addison Court. Now onto the third test unit, much of what was found in the first two sites has been cleaned and sorted and is being stored at the Marco Island Historical Museum. “Once we sit down with the artifacts and the data that we recorded as we were going through the levels in the units, we’ll have an even

better idea of the dates and the represented occupations there,” explains Mankowski.

Based on previous digs and research, Mankowski is able to give some ideas as to what further analysis will reveal. “Addison definitely has a Calusa occupation there based on the pottery we were finding and the level it was located at. We actually found what we call an Archaic period occupation. Near the bottom of the unit there started to become an absence of pottery which is consistent with the Archaic period. Only towards the end of their culture was pottery technology discovered but mainly throughout the archaic period there was no pottery. So that’s one indicator of the archaic zone. That as well as some of the shell tools we’re finding.”

One such piece is a shell pendant found in the lower layers on Addison Court. “It’s really rare and was basically used as an ornamental piece, to hang on a necklace,” adds Mankowski. “We also found another type of pendant that’s called ‘plummet.’ It’s actually made out of limestone. That is also consistent with

the Archaic period.” Classified as Late Archaic, the time period where these pendants would have been made is estimated at around 2000 BC.

To further classify these artifacts, Mankowski has taken column samples at the sites. By excavating a column the depth of the test site, about three feet, future scientific analysis will be able to reveal much more about the different levels within those columns. But first the digging must be completed.

“We’re going to finish up the third test unit and from there we’ll be focusing primarily on the analysis of the artifacts. A lot of them have already been washed

The search for Marco’s ancestors doesn’t stop at these three test sites. As the sewer construction continues, Advanced Archaeology will be collecting even more artifacts for the museum. “What we’re waiting on is the city sewer line to go through. We’re anticipating October or early November. Once that goes through, we’re going to take that soil that’s just rich with these artifacts and segregate it onto lots. We’ll have a big volunteer effort out there, sifting the dirt and bagging the more important artifacts. In turn, that will be brought to the museum for processing and analysis.”

Interested in getting your hands dirty? Look to Coastal Breeze News for future information on when and how you can get involved in uncovering the ancient civilizations of Marco Island.