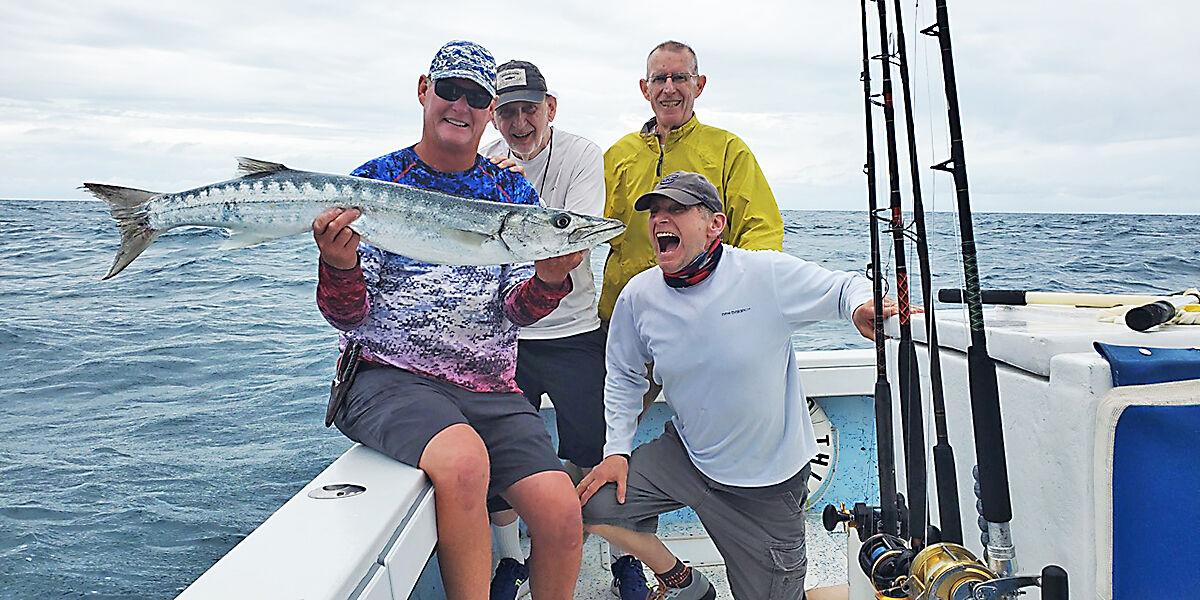 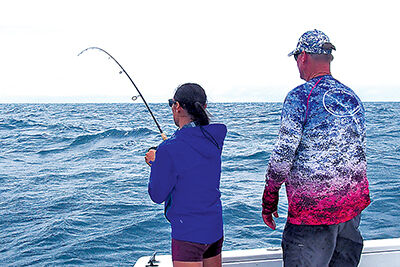 Tip Up for Alexisâ¯Lambâ¯for her 2nd barracuda with Captain Randy close by to assist. 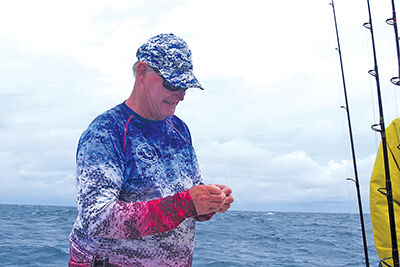 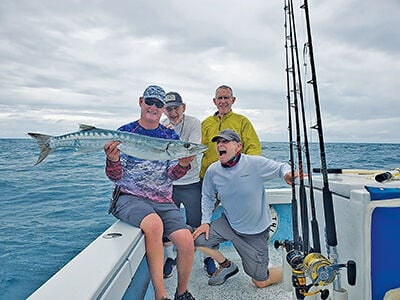 First catch, a barracuda—great for tacos. Captain Randy Hamilton, Will, Charles and Johnâ¯Lamb. 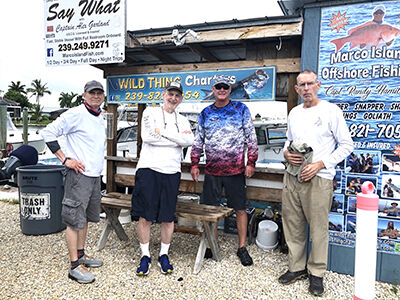 Lambâ¯Brothers, John, Will, Captain Randy Hamilton of The Wild Thing, and Charlesâ¯Lamb.

Tip Up for Alexisâ¯Lambâ¯for her 2nd barracuda with Captain Randy close by to assist.

First catch, a barracuda—great for tacos. Captain Randy Hamilton, Will, Charles and Johnâ¯Lamb.

Lambâ¯Brothers, John, Will, Captain Randy Hamilton of The Wild Thing, and Charlesâ¯Lamb.

A tropical weather depression in the Gulf of Mexico delivered cloudy skies and heavy rainfall to South West Florida during the Memorial Day weekend. However, this did not stop the Lamb family from fishing offshore with their go-to-charter, Captain Randy Hamilton of the Wild Thing Charters.

The thrill of catching the “big one” is still fresh in their minds from their last trip out with Randy Hamilton. Randy knows the locations of reefs and wreck, and he usually does not disappoint.

Captain Randy grew up in Western Pennsylvania and moved to Marco in 1987 and initially opened a dive shop. Not long after that, he bought the Wild Thing and began running a diving and fishing charters.

For the start of the 2020 season, Captain Randy’s bookings looked like it was going to be a good year, but then the Coronavirus happened, and his phones started ringing for cancellations during the peak of his “harvest season.” Like most of the charter operators, he was forced to dock his boat; the tourists disappeared!

Randy’s typical client usually wants to catch something to take home to eat or bring to one of the many restaurants for them to prepare their Catch of the Day. The most popular fish on their list is grouper and snapper.

For Randy, his peak season is February, March and April. In April, he had 20 charters booked, until they cancelled. Most of his revenue comes from charter bookings for those three months. Randy is not alone, however. All of the charters boat captains in Marco had the same experience. The charter boat operators make enough money during the peak season to cover their yearly expenses and help them through the slower summer months.

June is the start of the summer season and you will catch red groupers, lane snappers and Spanish mackerels. It is a slower season, but steady.

Looking through 2021—he has nothing—it is wide open. Captain Randy indicated that the Charter Industry has not been approved for relief; there are grants available from the National Association of Charter Operators (NACO) and also from Florida Fish and Wildlife (FWC). There are loans available, but he is not willing to take on a long terms expense that has to be paid back. For some charter boat operators, however, this might be their only alternative to survive.

Randy has never seen a downturn in the economy such as this one. There is nobody here to take fishing. Charter boat operators such as Captain Randy doesn’t have major payroll expense, but they have operating expenses that are not covered by the Stimulus Act.

If you’re dreaming of spending a day on the waters, consider chartering a boat for a day. The Wild Thing Charters is one of many charters located at Rose Marina who are knowledgeable of the local waters

The best way to support them for the slower season is for locals to consider chartering a boat for a day. The Wild Thing Charters is an offshore charter where Captain Randy usually travels 20-30 miles from Rose Marina to fish. Sometimes people call it “Deep Sea Fishing.”

Captain Randy is starting to get some “nibbles” such as the Lamb’s trip on Memorial Day; rain or shine. As a personal preference, Captain Randy believes the best fishing is during the summer.

For more information on The Wild Thing Charters, visit www.wildthingcharters.com.