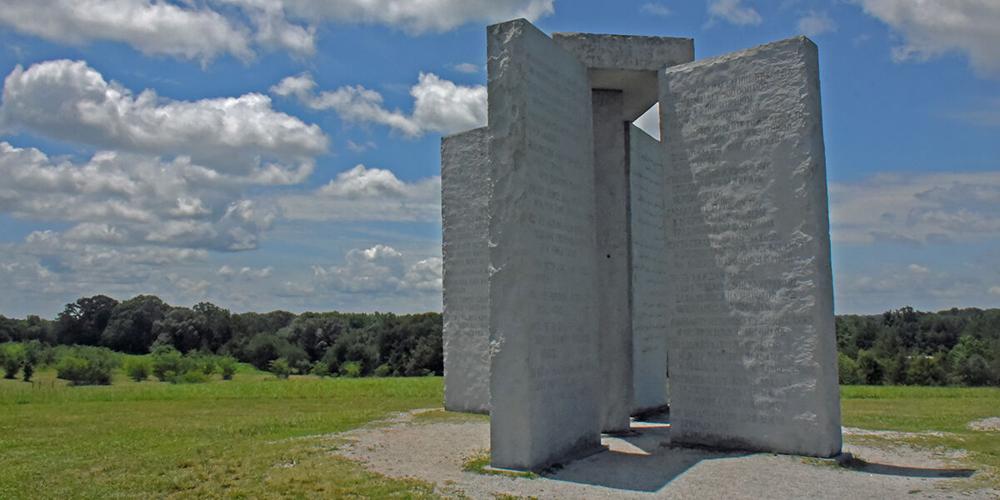 | Alone with an End of the World structure. 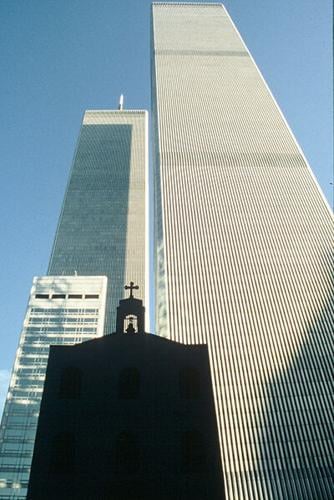 The tragedy of 9/11 brought our country closer together with pride in America and a strong belief in our strengths and resilience. 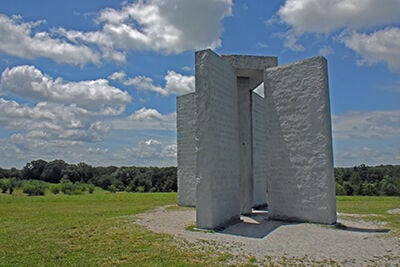 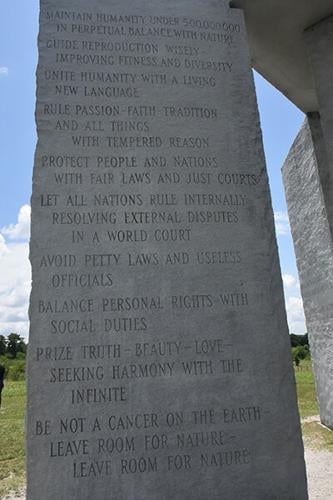 The 10 Commandments engraved in English.

| Alone with an End of the World structure.

The tragedy of 9/11 brought our country closer together with pride in America and a strong belief in our strengths and resilience.

The 10 Commandments engraved in English.

The brilliant blue sky was interspersed with voluminous fluffy white clouds floating lazily above us. The stillness was broken only by the faint sound of a lawnmower in the far distance. The 90-degree temperature sounds hot, but a slight breeze kept it quite comfortable. We were alone with nature on an elevated 5-acre knoll to view a very intriguing structure in northeastern rural Georgia. There stands a granite monument with chiseled instructions for those left behind if our present world is destroyed. A macabre thought indeed!

My longtime friend, Bob Jacob, an Englishman living in a tiny pristine Austrian village, is an avid history buff. Because my wife and I have a cabin tucked away in the beautiful northern Georgia mountains, he incorrectly assumed we knew all about the “Georgia Guidestones,” depicting the end to our present world and often referred to as the “American Stonehenge.” He had come upon it in researching the recent discovery of an additional ring of pits around Stonehenge in England.

At present, the world is in a conundrum dealing with the Coronavirus Pandemic causing disruption in people’s lives and loss of livelihood. And as if that had not caused enough hardship worldwide, now monuments of American history are being destroyed in our own country as protests continue to upend cities throughout the country due to alleged police brutality targeting blacks unjustifiably. Additionally, we have a nation politically divided right through the middle with no compromise in sight.

As Americans, we tend to be shortsighted, opinionated and with a limited understanding of the world around us. Some say they want to move to “greener pastures,” to other countries where everything is so much better. With the experience of personally having lived and worked in six different countries and having traveled in many more in all continents, I can attest that even today the United States of America, with its freedoms and opportunities, is still the greatest country in the world.

However, there is the “tunnel vision” of some who have not experienced these opportunities. Therefore, it is also no wonder, that there are more people today believing in an end to our world as we know it… Armageddon… Apocalypse. They do have different meanings as the first is a final human fight for mankind, while the apocalypse is the philosophy of the events that bring us to this brink of our extinction.

So, what better time to take a short leisurely road trip to investigate the Georgia Guidestones. Considering our current pandemic situation, they offer a scary theory about a future that was far advanced for the time this monument was erected. This was most likely a result of the Cold War period some 20-years prior to its construction when people were afraid of a nuclear attack and invasion by the former Soviet Union. Some of you no doubt remember children going through mock bomb scares at school in the early 60s.

Elberton, Georgia is a small city in the middle of a line of granite through northeastern Georgia. The city was incorporated in 1803; calls itself the “Granite Capital of the World” and claims to have produced more granite monuments than any other city in the world. There are no statistics to prove the claim, but this city of less than 5000 has created generations of stonecutters.

That is probably why a distinguished elderly gentleman attired in a suit and tie presented himself in June of 1979 at the Elberton Granite Finishing Company. He said his name was Robert C. Christian and admitted that was not his real name. He explained that he represented a small group of true Americans, who wanted to build a structure out of granite, but who wished to remain anonymous. The stones, Mr. Christian explained, would be a calendar, a clock, and a compass and should be strong enough to withstand storms, catastrophic events, and any other calamity. He explained his group had been working on a model for 20 years.

Joe Fendley, the representative for the granite company, thought the stranger was crazy. He presented him with a price much higher than the actual cost. “I have to hire additional men and get special tools,” was Fendley’s excuse in hopes that Mr. Christian would go away. However, the quote was accepted without discussion. Four months later, the five-acre parcel of land was purchased by Christian from a local farmer and he presented a scale model and numerous pages of astronomic features and specifications. This included a channel through the stone indicating the celestial pole, a horizontal slot marking the annual trajectory of the sun and a sunbeam through the capstone marking noontime throughout the year.

Six months later, on March 22, 1980, the structure was unveiled in the presence of a few hundred guests who were impressed, delighted, or abhorred by the monument. After the ceremony, all documents pertaining to the construction and origin of this multi-stone mystery monolith were destroyed. Later, under total secrecy, the ownership was transferred to Elbert County.

The monument is constructed 750 feet above sea level, is 19 feet and 3 inches high and is made from six granite slabs at an approximate total weight of 238,000 pounds.

Another smaller granite stone lies flat in the ground nearby and provides information about the structure and the languages used on it. There also is a reference to a time capsule under it. However, the space for the inscription of the date the capsule was put in the ground and an opening date were left blank. I asked Christopher Kubs, Executive Vice President of The Elberton Granite Association, why no one has checked if the capsule is indeed there. He could not give me a clear answer but did say and I quote: “Often, the mystery is more interesting than the reality.”

The engraved messages on each side of the columns consist of ten commandments in eight languages: English, Spanish, Swahili, Hindi, Hebrew, Arabic, Traditional Chinese, and Russian. The flat granite capstone reads: “Let these be the guidestones to an Age of Reason.” Etched around the edges is the translation in additional ancient languages: Babylonian, Classical Greek, Sanskrit, and Ancient Egyptian hieroglyphs.

Obviously, the message is extremely controversial and open to personal interpretation. Especially, the first instruction giving us images of forced birth control as has been used in China in the past. Or number two suggesting to only let the healthy specimen live, conjuring horrific thoughts of Hitler’s “pure race” Nazism. Someone even spray-painted: “Death to the New World Order” on the granite. Another said: “Just because this does not align with your thinking does not make it evil.” Yet another added graffiti: “I am Isis, Goddess of Love.” Today, the site is surrounded by 24-hour cameras. The day we visited it was in pristine condition gleamingly clean of any graffiti.

A local banker named Wyatt Martin was the agent for Christian and the last person alive involved in the project. It is not known how much he really knew about the people who were behind the creation of the structure or their philosophy. However, he repeatedly stated that he had agreed to complete secrecy and would not break his promise. Indeed, Martin took the mystery to his grave.

Perhaps the mystery will be solved one day, or perhaps not. After all, ancient Stonehenge was already one of the most studied archaeological sites on Earth, and only last month there was a new discovery of 20 shafts built in a ring within a 1.2-mile radius of the existing Heritage Monument. Who knows what could still be found at the “Georgia Guidestones?” While we ponder this more recent mystery, perhaps we should be introspective in learning to be more open to opposing opinions. We should remember how the tragedy of “9/11” brought our country closer together with pride in America and a strong belief in our strengths and resilience.