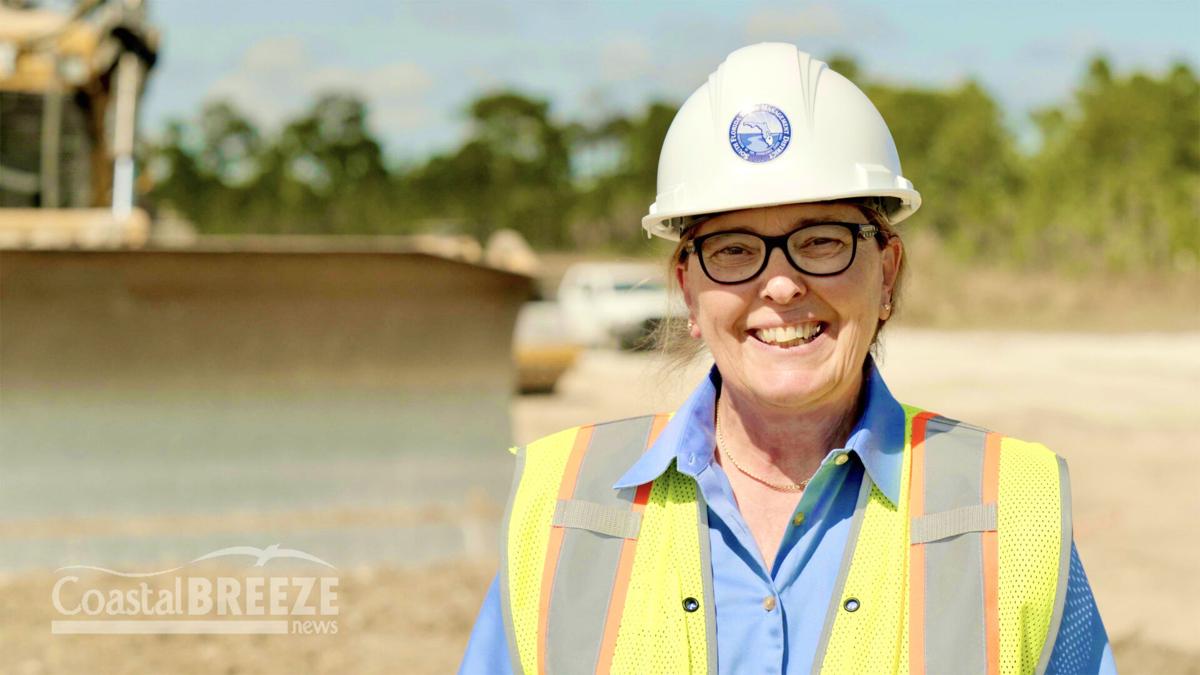 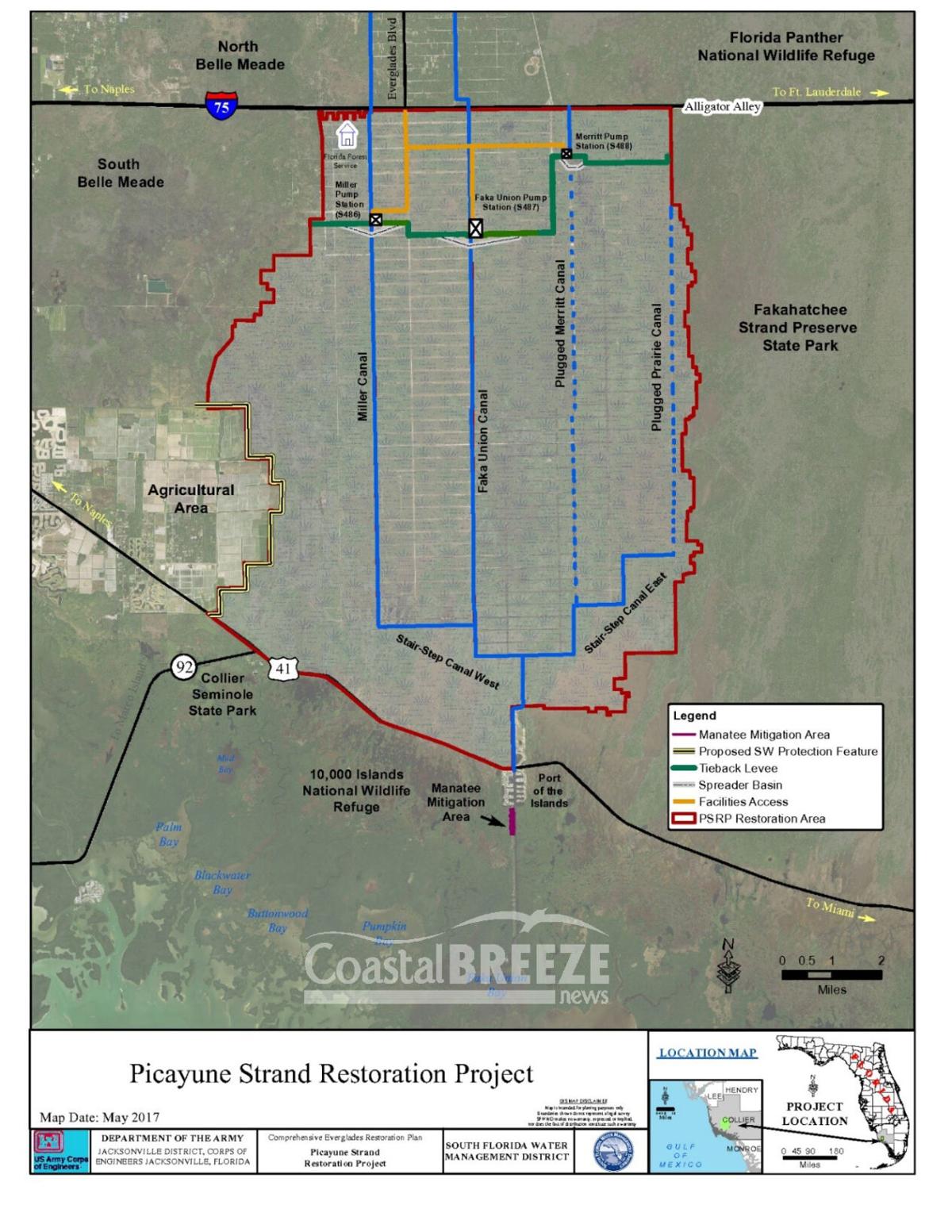 “It will make the whole estuary more resilient and healthier so it can fight off things like Red Tide.”

"There is one thing stronger than all the armies in the world, and that is an idea whose time has come,” said French poet Victor Hugo in the 1800s. Former Marco Island City Council vice chair Charlette Roman, who now chairs the Big Cypress Basin and sits on the South Florida Water Management District Governing Board, made Hugo’s words ring true recently. Roman's big idea led to the initial “flipping of the switch” on the huge Faka Union Pump on July 2.

Roman was given the honor of flipping the switch to start the pump, which will pump water over depleted wetlands at 2,650 Cubic Feet per Second (CFPS). The experience was a rush for the retired U.S. Army Colonel.

“It was amazing,” Roman said, “to see just a little bit more restoration occurring at the Picayune Strand Restoration Project with the turning on of the pump station—it’s exciting. It’s just really exciting. I mean every time I go out to the Picayune Strand Restoration Project and see the wildlife returning and us managing the water to restore the hydrology, it is just amazing. I know that sounds cliche, but it truly was amazing."

“The visionary thinking of Charlette Roman,” said Brad Cornell, Southwest Florida policy associate for Audubon Western Everglades, “is an instance of someone being creative and intelligent about getting some restoration benefits started early on several thousand acres of wetlands.”

Roman served on Marco’s City Council from 2016-2020. She was appointed to the South Florida Water Management District (SFWMD) by Governor Ron DeSantis in 2019, serving as an at-large member. While Roman downplays her idea, it will have a direct positive effect on water quality in the Marco Island area.

“I just asked,” Roman said modestly. "I asked our partners and a lot of the smart people there, ‘What can we do? Can we do more than we’re doing now?' That’s what I asked. ‘Can we be doing more? Can we get more benefit from that pump station? Is there something we can do together with our partnership with the Army Corps of Engineers (ACOE)? I just asked. I don’t think that took a lot. People who were involved were already wanting to get the pump station working. They really wanted to see more. Our tax partners paid for that pump station. Our tax dollars were really investors. I don’t think I really did anything out of the ordinary. I just asked.”

The Faka Union Pump was completed in 2017 but had not been used prior to July 2 because work needed to be completed on the Faka Union Canal. The pump’s activation was also being delayed until a levee was built, and culverts were installed under U.S. 41 around the intersection of S.R. 92 and U.S. 41, just miles from Marco Island.

It turns out Roman's questions got the ball rolling on the project.

"Charlette got the great idea of, ‘Hey, why do we have to wait for the last levee project,'” Cornell said. “The purpose of the levee is to protect the Lipman and 6L farms down there on the East Trail. Charlette Roman asked, ‘Why do we have to wait for that levee to be finished, which won’t be until 2023? Why can’t we plug some of the Faka Union Canal - 3.3 miles of it - and get some of those benefits.’"

According to Cornell, Roman’s proposal won't send any water down to the Lipman and 6L Farms.

Plugging involves using bulldozers to plug a canal with fill dirt in strategic areas, rather than filling in the entire canal, which would require large amounts of expensive fill dirt and man hours to complete.

The implementation of Roman’s idea ensures that thousands of acres of wetlands south of the Faka Union Pump are receiving immediate restoration benefits.

“This 3.3 miles of the Faka Union Canal is one increment of a larger project,” Cornell said. “It demonstrates what can happen when people use their noggins and get creative. ‘Hey, no one has done this before. How can we make this happen in the best way possible?’ That was one particular instance of someone being creative and intelligent about getting some restoration benefits early to several thousand acres of wetlands. We want to applaud that particular initiative by the Water Management District and particularly Big Cypress Basin Chair Charlette Roman. That’s news worthy of celebrating.”

The Faka Union pump is one of three pumps that are used to push water into spreader basins that then sheet-spread water across the failed South Golden Gate Estates real estate development - in essence restoring valuable wetlands. The pump's other function is to keep water from backing up and flooding North Golden Gate Estates.

The ACOE built pumps on three major canals - the Merritt, Faka Union and Miller - that sit next to each other, just west of Fakahatchee Strand Preserve State Park. Work started on the pumps in 2007. All three pumps are complete. But it took until July 2 for the Faka Union Pump to be put to use.

“That pump station has been sitting there not being used, other than exercised,” Roman said. "So, to be able to turn it on after the 3.3 miles was completed by the ACOE and start to get some restoration benefit from it, was a big step. It’s Everglades Restoration. We want to move forward. Governor DeSantis has given us a charge as a governing board to move forward with Everglades Restoration and the momentum is really gaining speed at quite a quick pace since we’ve started.”

Cornell said that the benefits of the Picayune Strand Restoration Project are already being seen. He said almost 40 percent of the project is complete. He expects the remainder of the project to be completed in the next couple of years.

“We’re seeing wading birds that have already returned,” Cornell said. "Florida Panthers that have already returned, black bears that have already returned to that former South Golden Gate failed development. All those wildlife are already back there. All those places are going to be much healthier. We’re not going to have as many wildfires in the wintertime because it won’t be drastically dry - it will just be normally dry. So, we’re going to have more wildlife, more wading birds, more fish downstream in the estuaries, and more just general wildlife over the whole 70,000 acres. This will be a much more dynamic, diverse and interesting place year-round. Much wetter in the summer and not as drastically dry in the winter and spring.”

The Picayune Strand Restoration Project is reversing the damage done by the failed South Golden Gate subdivision in the 1960s. The Gulf American Land Corporation project died when the company went bankrupt in the early 1970s. As part of the restoration project, the State of Florida has bought back the lots from their owners, spread across the world.

"The state bought all these lots, 17,000 to 19,000 lots, from people all over the world,” Cornell said. “They reassembled them and are basically on their way to the filling in of 48 miles of canals, degrading of 260 miles of road over this failed subdivision that was built 50 years ago. It was a classic Florida swampland swindle that the Rosen Brothers of Gulf American Corporation had perpetrated on people all over the world. They basically sold land that was under water. They did build six-foot deep canals and roads, but they didn’t tell people that half the year - even despite the canals - it was under water. It wasn’t really appropriate for development. The state realized that. And since the South Golden Gate Estates was the most ecologically sensitive and difficult to develop, they decided to buy all that back with the intention to restore it. That started 30 years ago. They completed it back in the early 2000s. The partnership of state and federal government started to restore it. In 2007 Governor Bush came down and did the groundbreaking. And they’ve been working on it ever since. They’re going to be done by 2025.”

Roman gives Governor DeSantis much of the credit for spurring the recent activity on the project by publishing an executive order called Doing More Now for Florida’s Environment, that includes Everglades Restoration and water quality improvement. He also asked for the resignation of the entire SFWMD board.

“It was huge,” Roman said. “He appointed all new board members. I was one of the new board members appointed by Governor DeSantis when he cleaned house. Governor DeSantis asked us to look at what we could do to expedite the whole effort. And so, I think, yes, fresh eyes helped. I really think the stakeholders need some praise, too. They’ve been watching this project for many years. They’ve been invested in it. They wanted to see it move forward and to get more benefit at Picayune. The stakeholders like Brad Cornell at Audubon, the Conservancy of Southwest Florida, Florida Wildlife Federation and Rookery Bay. Everybody who is downstream from the Picayune wanted to see us get more restoration benefit. Sure, I asked people to put their heads together and see what we can do. But that was easy. They did the work and found a way to put things together so we could actually be where we are today.”

Marco Island will certainly benefit from the Picayune Strand Restoration Project. Cornell said it will improve water quality and in turn help alleviate the effects of Red Tide.

“It will help benefit us in reducing bad water quality in our estuaries,” Cornell said, "namely Rookery Bay, the 10,000 Islands and Faka Union Bay that are downstream of this project, to the south and southwest of this project, that butt right up to Marco Island, Cape Romano and all those areas down there. That part of the world will see better water quality because of this project. Salinity balances will be better, it will make the whole estuary more resilient and healthier so it can fight off things like Red Tide. That’s kind of the principle, if you take care of the watersheds above the area where Red Tide is happening, you’re going to have a better chance of reducing the instances and intensity of Red Tide and harmful algae. That’s a scientific principle. It’s hard to draw a direct line, but generally that principle holds in every watershed.

"This will benefit the water quality of the 10,000 Islands and the Rookery Bay estuaries. And yes, by helping those waters be cleaner, healthier, and with better salinity balances, you’re going to have fewer instances of harmful algae. You’re never going to get rid of Red Tide because that’s a natural phenomenon. But what we’re trying to address is the unnatural intensity and frequency that we’ve been seeing of Red Tide. When you restore and protect the watersheds that send water to our estuaries and downstream waters, you’re going to have a much less intense problem with harmful algae.”

While Roman and her colleagues are happy with their recent victory in actuating the Faka Union Pump, she remains steadfast in her pursuit of the ultimate goal.

“This action with the Faka Union has momentum," Roman said. "But I’m not going to stop working on Everglades Restoration until the project is over the finish line. Because we’re not going to stop until it’s done. This is a giant step - but we’re not done yet.”