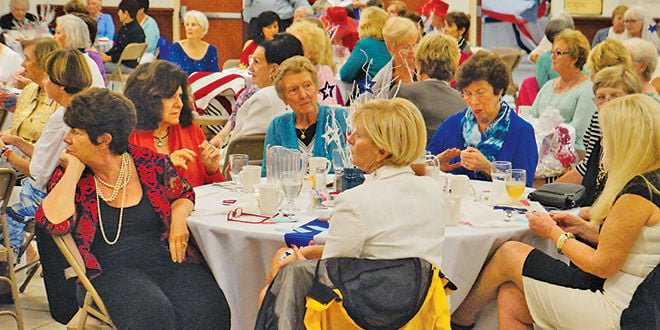 A crowd of 300 braved heavy rains to attend the American Beauty Fashion Show. 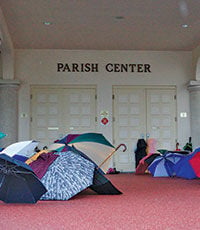 Umbrellas lined up outside the San Marco Parish Hall.

On January 27 Marco Island was soaked with record-breaking rainfall of almost four and one-half inches. But even heavy showers did not deter the three hundred women who attended the sold-out American Beauty Fashion Show at San Marco Catholic Church.

The annual fashion show is organized by the Council of Catholic Women (CCW) as a fundraiser for the many charities and scholarships the group supports in the community. This year’s theme, American Beauty, was reflected in the red, white and blue decorations throughout the church, as well as the attire of many of the ladies.

Joyce Imbrogno and Vice-chair Chris Ferris led the event, and worked hard with volunteers to make the fashion show a success. Proceeds from the American Beauty Fashion Show benefit the many charities CCW supports, such as St. Matthew’s House and the Shelter for Abused Women. The CCW also awards educational scholarships. Joyce told us “Every penny raised goes towards charities.”

An impressive 41 raffle baskets filled two rooms. Guests purchased tickets for a chance at winning a basket. The ladies lined up patiently, examining each basket before deciding on their favorites.

coordinator for the church, played the piano beautifully throughout the event. St. Matthew’s House served a delicious lunch, prepared by the Knights of Columbus, who also helped out by serving mimosas to the ladies.

A variety of colorful fashions were presented by Kay’s on the Beach and Patchington. The models, starting on stage, circled the room giving all the ladies a close-up view of their outfits.

Some of the local businesses that donated door prizes were Beach Daisy, Island Trends, Marco Island Clothing, Obsession, Salon Botanica, Sandpiper, Something Old Something New and Starbucks. Joyce told us that she wants to “thank everyone for their participation.”