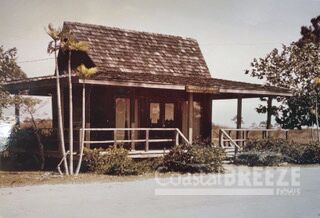 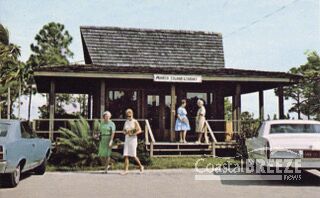 The welcome hut transformed into the Marco Island Public Library.

“Many people think that libraries are built by the county or the state, but they aren’t. They are built by people.”

This statement was never more true than for the fledgling community of Marco Island in 1967.

The Mackle Brothers officially opened Marco Island in January 1965. The first inhabitants of modern Marco moved into their homes in April and it was a little more than a year and a half later that 16 women banded together to form the Marco Island Woman’s Club (October 24, 1966).

These women were organized and they were on a mission! By the Club’s second year, President Aimee Horton was overseeing a growing membership, several committees, including the Community Improvement Committee (later the Community Affairs Committee) and the Education Committee.

By 1968 the population of Marco Island had grown to approximately 1,000 people. Development of the Island was progressing but much remained to be done. One glaring omission to date - a library. The only available library at the time was in Naples, 28 miles away over the swing bridge. Hardly convenient.

The women were passionate about the need for a library and agreed to take on the establishment of a Marco Island Library as their main project.

Now what? What do you need for a library? Books, a physical building (a library), librarians, money, and know-how.

The Marco Island Woman’s Club got to work. The original thought was to house the library in a room at the Volunteer Fire Station. Fortunately, the Marco Island Development Corporation came to the rescue and donated what was once their Welcome Hut, a Polynesian style shack of 14 x 16 feet. The hut was moved from its original site on SR-41 to the corner of Collier Boulevard and San Marco Road.

The ladies turned to the community, the Friends of the Library of Collier County, and the librarian at the Collier County Library in Naples. The Club bought materials for shelving and

carpenters and painters volunteered their time and skills. Lemon and avocado were chosen for the color scheme and shortly after the library opened, draperies, wallpaper, and other touches were added.

While some members concentrated on readying the physical space there were many practical details still to be managed. How would we get our supply of books? Who would staff the library? How would they be paid?

The Woman’s Club Board met with the librarian of the Collier County Library, Naples. She outlined the plans by which her institution could help the new Marco Library get started.

The original stock of books, mostly donated and purchased, numbered about 350 volumes.

In the first month 110 books were circulated. The Naples library agreed to add an initial allotment of 400 to 500 additional books to be regularly rotated. A year later, in 1969, the County agreed to give the little library an allowance of $1,200 per year.

Next – personnel. There was no available funding for salaried positions. This was going to have to be a volunteer endeavor. Who was going to do the work? It was agreed that the Marco Island Woman’s Club would supply the womanpower to run the library. The Naples librarian would provide a crash course in how to set up and run a library. Once operational, the Club’s Community Improvement and Education Committees would provide oversight.

Woman’s Club President Aimee Horton named Club member Janet Pettit as head librarian. Janet’s only qualification for the job was a love of books and, as it turns out, incredible energy and dedication. Janet asked sister Club member Petey Karr to serve as assistant librarian and to take responsibility for training and scheduling the Woman’s Club members who volunteered for duty.

During the five and a half years of volunteer staffing, Petey had to work around the schedules of initially 15 and then 30 volunteers. Sometimes there was a mad dash to arrange coverage when a scheduled volunteer called in sick, had an emergency, went on vacation, or just plain forgot. Only once in five and a half years did the library not open because a volunteer had to rush home to take care of a leaky house.

Head Librarian Janet Pettit was tireless. Each month, after studying trends and reviews of new books, Janet would take her selections for new books to the Naples Library for processing. One of the beautiful things about a small library in a small community is the personal connection that forms. The librarians knew their reader’s tastes and preferences when choosing books to stock the shelves. Very often a librarian might make a call to advise when a book of potential interest arrived. Janet Pettit was known to personally deliver books to the homes of people who were too ill or unable to get to the library.

Janet also wrote a bi-weekly newspaper column where she documented current additions to the library and commented on coming new releases or various library functions.

In its earliest days, the little library was only open two days a week for three hours each day:  9:00 AM to12:00 noon on Saturdays and 2:00 PM to5:00 PM on Tuesdays. Later, the library was also opened on Thursdays during January, February, and March. Library cards were free to Island residents. Visitors were asked for a returnable deposit of $5.

The library started with 350 books and grew to 3,500 volumes by 1973. Most likely 3,000 of those books were transported from Naples to Marco in the trunk of Janet Pettit’s car and placed on the shelves by Janet herself!

By 1973 it was clear The Marco Island Woman’s Club “library project” had been an outstanding success. But it was also clear that the much loved and much used little library was bursting at the seams and ready for its next stage of development. Janet Pettit and co-chairman John Winder, along with various members of the community, began a building fund drive for a new library that would be 12 times the size of the original. Deltona Corporation donated the building site on Winterberry Drive and provided, without fee, the architectural sketches and detailed drawing of the proposed building.

After five years, nine months and two weeks, “the little library that could” closed its doors for the last time.

With the Woman’s Club’s continued financial and volunteer support, the library was moved to Winterberry Drive (now the Collier County Tax Collector’s Office). Once again, the library building became too small for the Island’s growing population and once again, a move was required. In 1988, the present library was constructed on Heathwood Drive, at twice the size, under a $1.6 million county project.

Thanks to the Marco Island Historical Society for their assistance in researching this article.

Wonderful article…I remember this little library so well! One correction is needed though and that is that the original library was located at the corner of Bald Eagle and San Marco not Collier and San Marco.

The original library was at the corner of San Marco and Bald Eagle. My grandfather used to take me there so your location is incorrect.