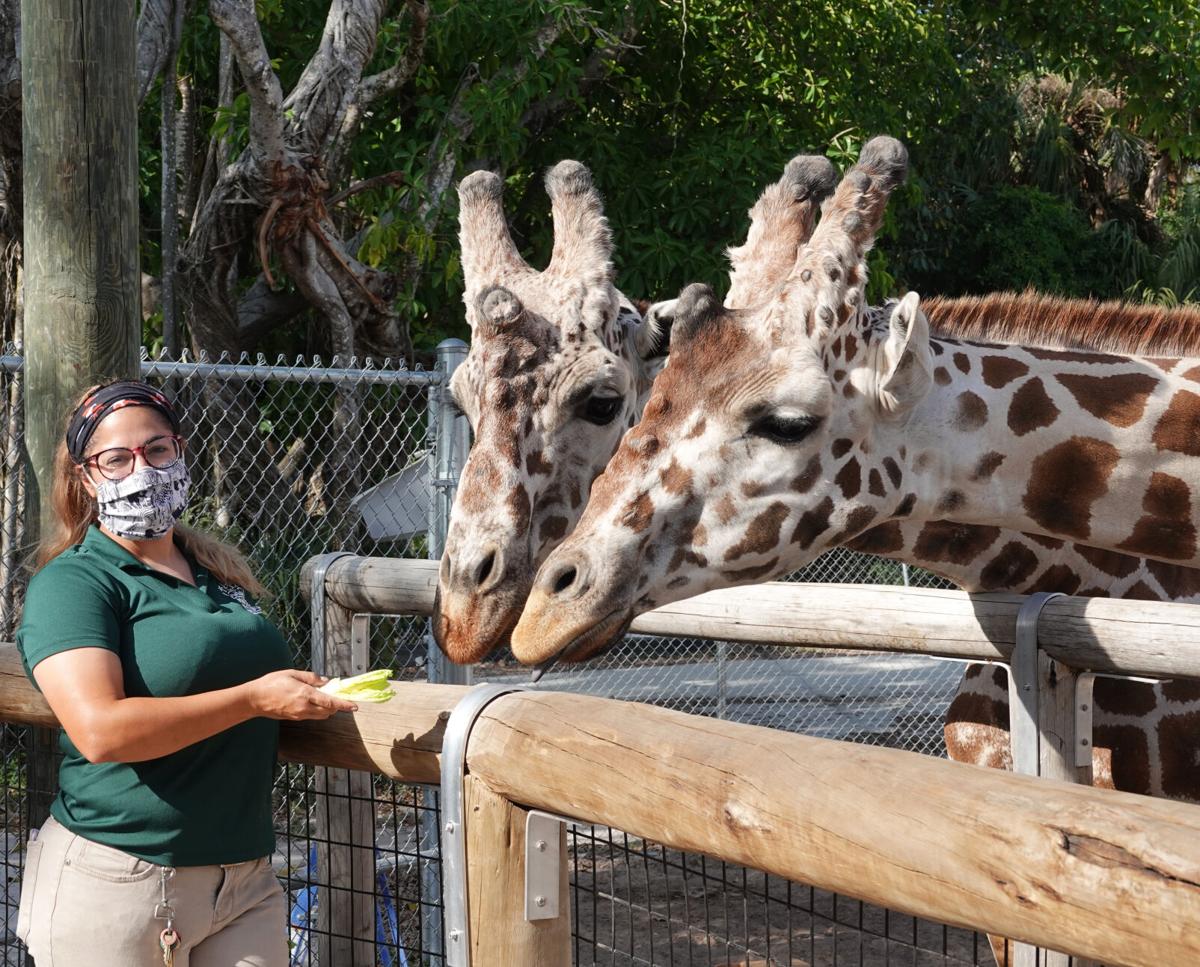 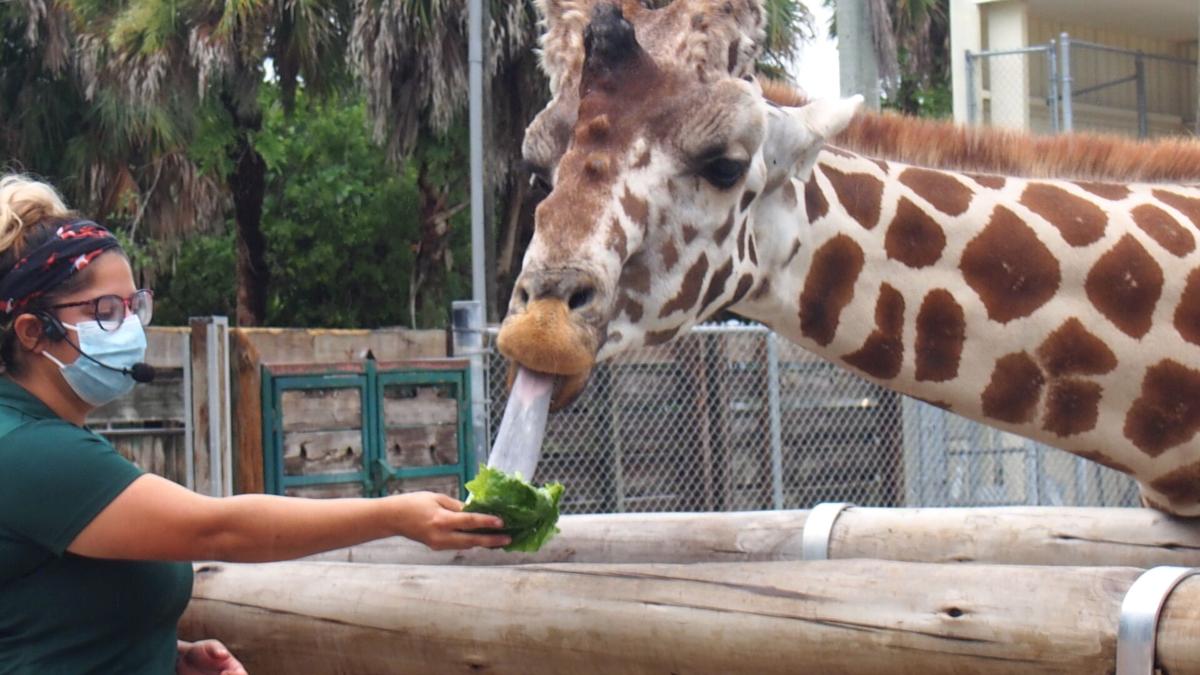 Zookeeper Rachael Cairo feeding Bruehler, the “top dog” of the herd and a “people person”. Notice his purple tongue that is almost 20 inches long. 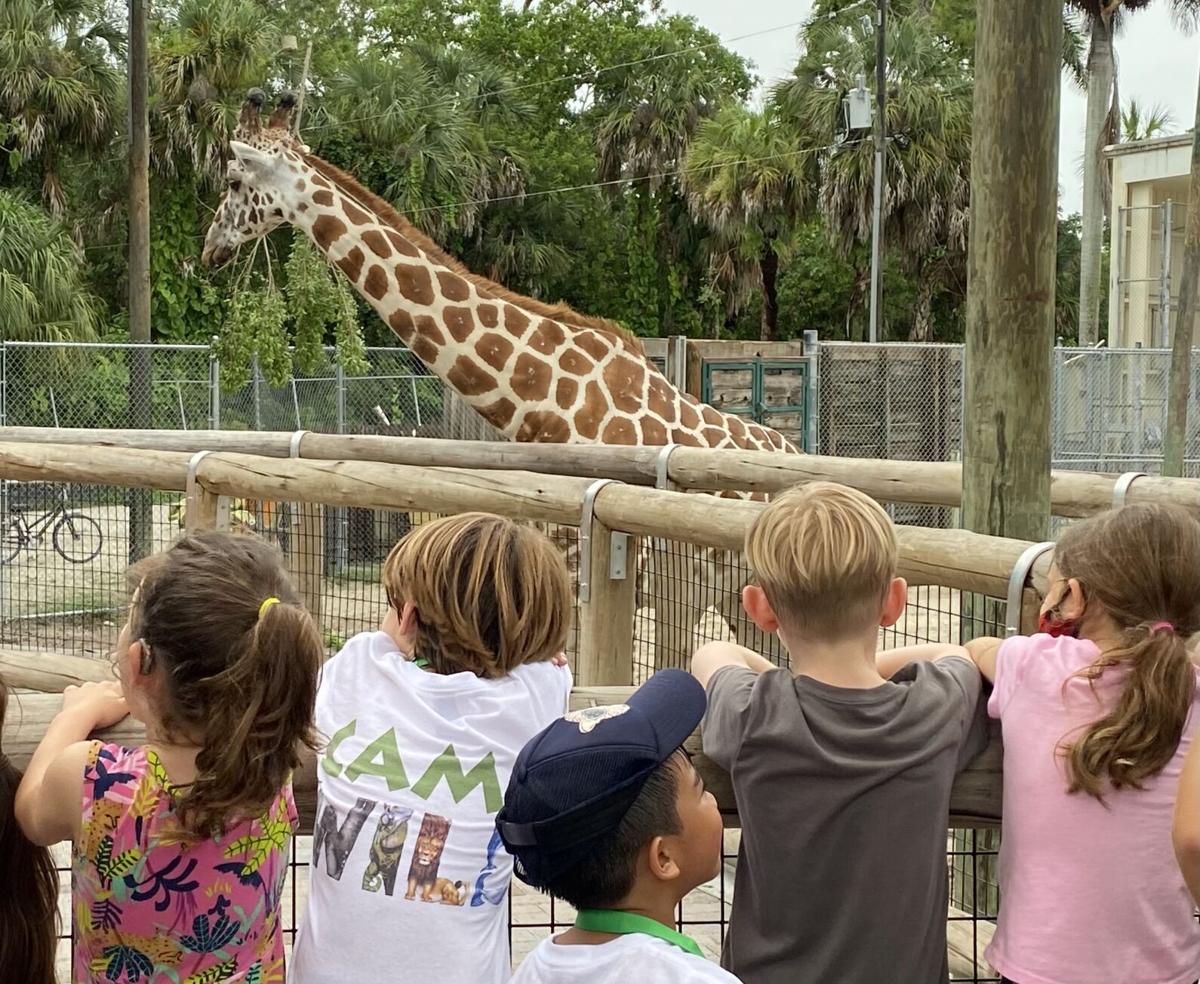 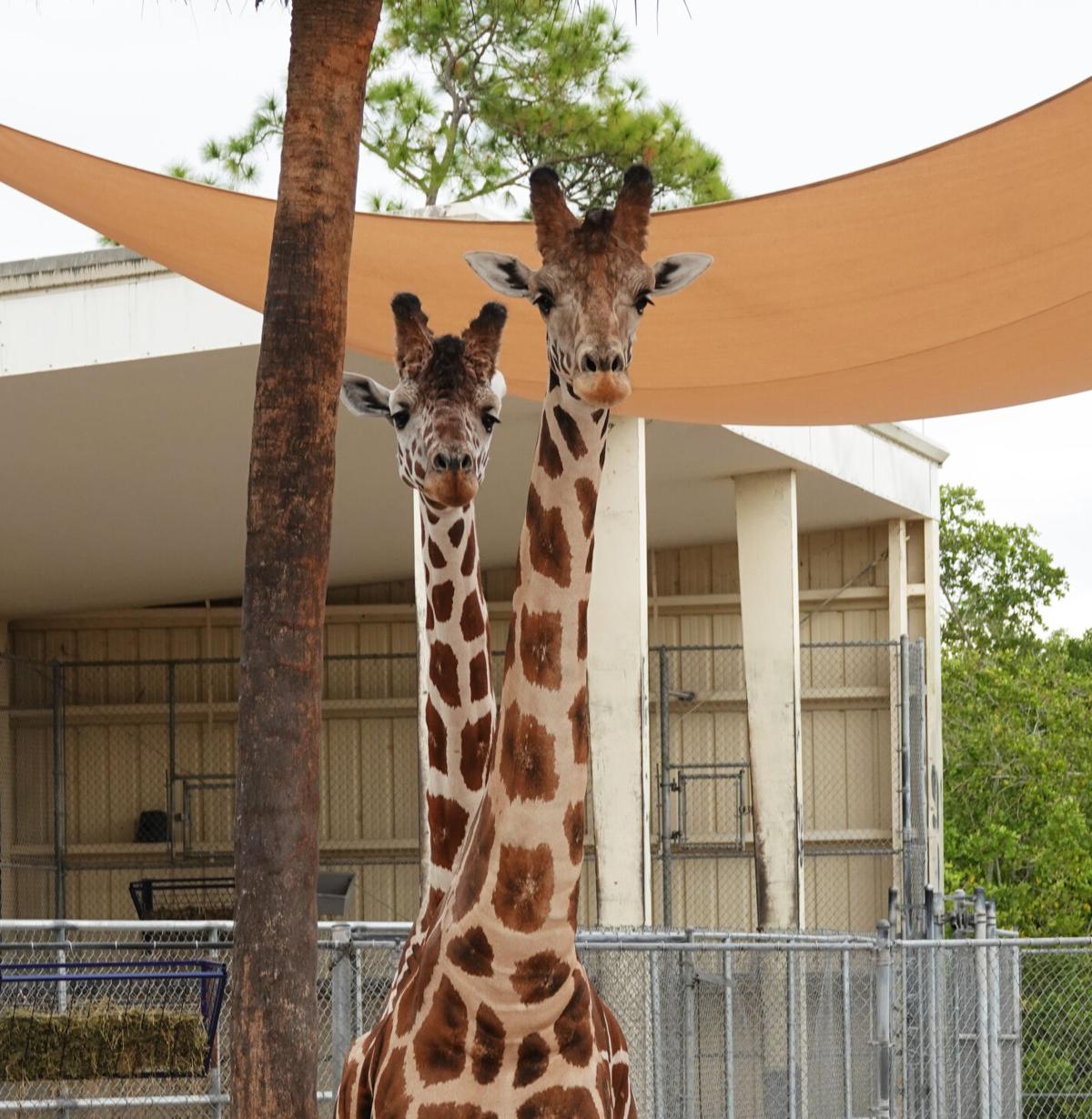 Timber (back) with Zuri (front). Timber is the oldest at almost 13 years old. Zuri has light blondish hair like a surfer boy and likes to stand in the rain. 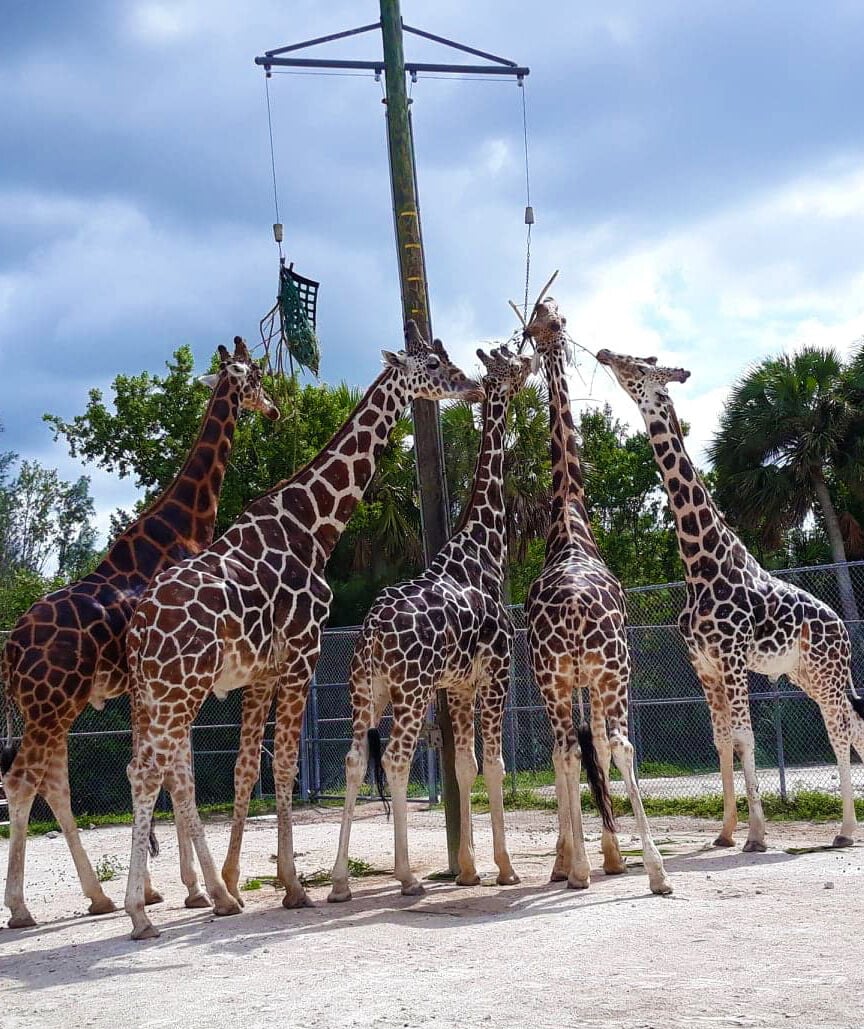 What do you call a group of giraffes?  A “Tower of Giraffes”. 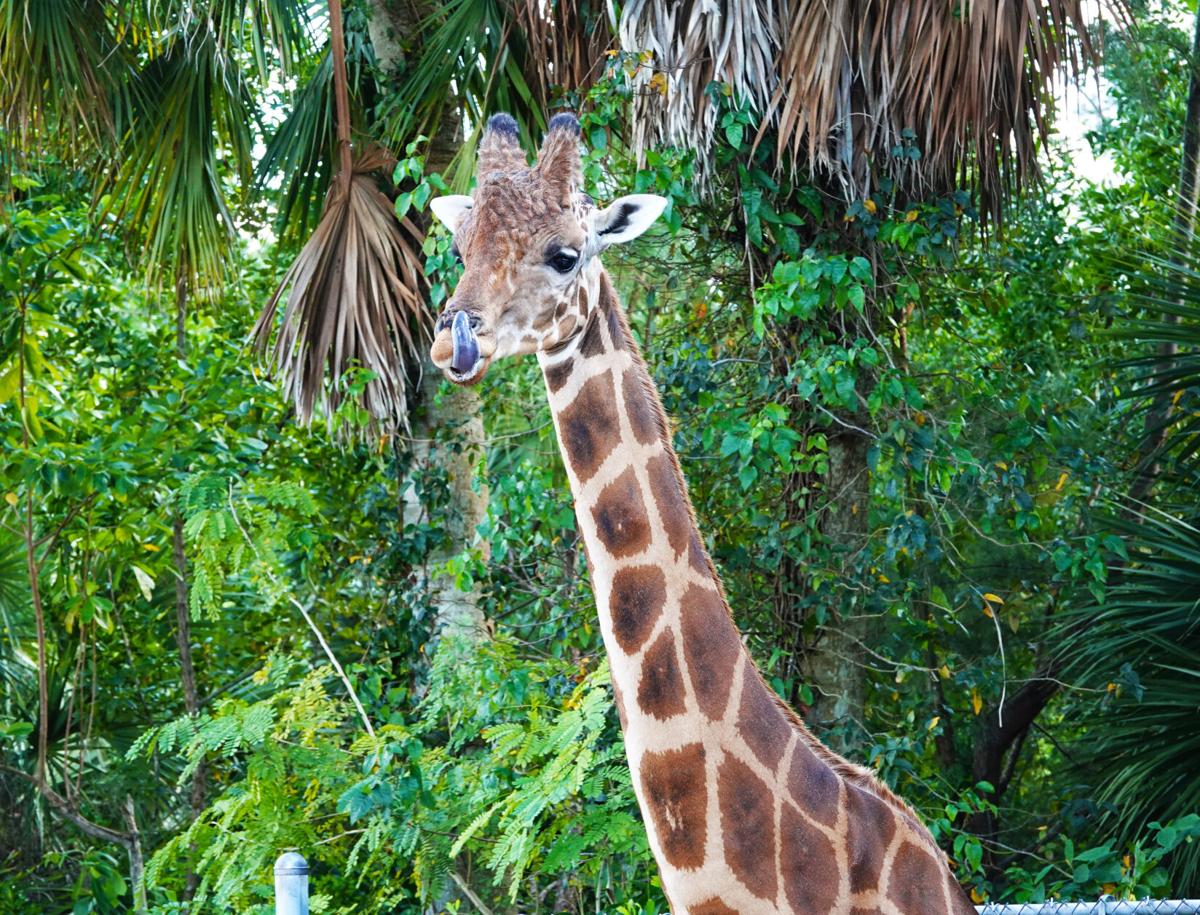 Jumanji is the tallest giraffe of the herd towering at 18 feet tall.

Zookeeper Rachael Cairo feeding Bruehler, the “top dog” of the herd and a “people person”. Notice his purple tongue that is almost 20 inches long.

Timber (back) with Zuri (front). Timber is the oldest at almost 13 years old. Zuri has light blondish hair like a surfer boy and likes to stand in the rain.

Jumanji is the tallest giraffe of the herd towering at 18 feet tall.

The Naples Zoo celebrated World Giraffe Day on June 21, the longest day of the year,

and partnered with the Giraffe Conservation Foundation (GCF) to raise awareness and funds for giraffe conservation.

According to Kelsey Burr, Digital Marketing Manager of the Naples Zoo, only about three thousand of the Critically Endangered Nubian giraffes survive today. About half of them live in Murchison Falls National Park where they must evade a maze of lethal wire snare traps placed by poachers.

To help them, GCF took an active role in supporting the veterinary response and anti-poaching operations with Uganda Wildlife Authority in 2019. Naples Zoo agreed that same year to fully fund the annual salary of one of the wildlife veterinarians, Dr. Sara Ferguson. Since that time, she has helped free more than 200 giraffes from snares along with other species like hartebeests, chimpanzees, lions, and elephants.

According to the latest census, in just the last 30 years, Africa’s giraffe population has plummeted by 30%. Today, with an estimated population of 117,000, there are four elephants for every one giraffe.

The giraffes at the Naples Zoo are all Reticulated giraffes with about 15,950 individuals in the wild. Reticulated giraffes have a netlike coat pattern that looks like someone threw a brown net over a white animal with the predominant color pattern of mostly white with variations from very dark to light brown. Just like fingerprints, their spots or patterns are one of a kind.

According to Naples Zookeeper, Cindy Watson, everything about a giraffe is long. Giraffes are the tallest land mammals on earth and Jumanji at the Naples Zoo towers at 18 feet tall. Their stilt like legs alone are about six feet long and their necks can measure over five feet. Even their tongue is about 18-20 inches long – it’s dark purple in color which is supposed to protect them from frequent sun exposure.

Naples Zoo is home to a herd of five bachelor giraffes. According to Rachael Cairo, a giraffe zookeeper, young males form bachelor herds in the wild. They will play with each other, fight with each other and test each other to find out who is the strongest and the most dominant – sort of a survival training program for young male giraffes.

Timber is the oldest of the herd, almost 13 years old. He is very laidback, staying off to the side and is seldom involved with the other giraffes. But he is also the self-appointed herd “police officer” who likes to keep the peace in the herd.

Bruehler is the "top dog” in the pecking order. If he wants something, the other giraffes will usually back away. But he is also the troublemaker of the group and likes to stick his “long neck” into everybody’s business. But Bruehler is a “people person” and as soon as he sees guests holding a piece of lettuce by the fence – he is there!

Bolo is the problem solver, and he loves puzzles and spend the most time at the enrichment table. He also loves to touch things with his tongue. Zuri has light blondish hair like a “surfer boy,” and he loves to stand in the rain and hangs out with Bolo a lot. Jumanji is the tallest at 18 feet tall and weighs close to 3,100 pounds.

In the wild, giraffes eat mainly plant materials - bark and leaves. At the Naples Zoo they love sweet potatoes and apples along with browse and alfalfa hay. Giraffe’s sleep standing up or lying down but they only sleep one to three hours a day. In the wild and in human care, they are very hypersensitive to their surroundings and in the wild, it is a matter of survival to be alert.

After spending a half day with the giraffes at the Naples Zoo, I can’t imagine a world without them. According to zookeeper Cindy, it is worth saving these iconic, magnificent, beautiful creatures that do no harm to humans and do so much good in the wild!

The giraffe enclosure is very popular with families where everyone can interact with a wild animal. Zoo hours are 9:00 AM to 4:30 PM and giraffe feeding is open every day from 10:00 AM to 3:00 PM where visitors can purchase a bunch of lettuce for $5.00.