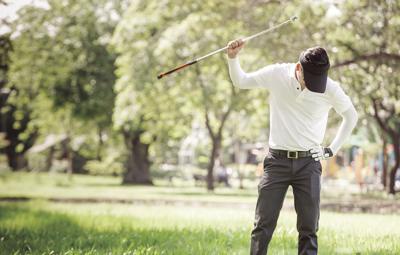 One of the main differences between, say, pro football or basketball or baseball and professional golf is this: If a pitcher is getting bombed, the manager will yank him in a heartbeat! If a QB throws three picks and can’t find an open receiver, he’s sitting down for a while and, well, you get the point! But in golf, when a PGA Tour pro can’t find the fairway, hit a green or make a putt, he/she stays right there and continues taking their punishment all the way to the house! The carnage is on display until the last putt mercifully falls in the hole.

This past weekend Collin Morikawa lost a big lead in the Tournament of Champions at Kapalua in Hawaii. For those of you who watched it, you saw a nine-shot lead dwindle away to what eventually became a three-shot loss! In 17 holes! It was devastating for Collin, but I think he will recover in due time. However, undoubtedly there will be scar tissue on his golfing brain for a while. The game of golf is not always kind in fact, it can be downright vicious! It goes for the jugular. It has a way of finding any slightly weak link and exploiting it in the harshest way possible. Collin may have many great days, and inevitably some more bad ones. But he is not likely to forget this one for some time. Every golfer, pro or amateur, who loves this game and tries to play it seriously, knows the joys and the sorrows it can bring - sometimes only minutes apart! The best shot one has ever hit can be followed by the worst. We all go from loving it to hating it in a flash. Like life itself, we ride the roller coaster, take the good with the bad and learn to smile at the end. But great players accept this simple fact about the game while many amateurs do not.

Watching on TV, one can only guess that he started to think evil thoughts…Oh no this can’t be happening…everybody is watching this debacle…I can’t stop the bleeding and on. We have all been there. Then, of course, it’s a snowball rolling down a snow-covered hill at that point. As the old adage says: “If you think you can or if you think you can’t - you’re right”! It is darn near impossible to clear the mind of evil thoughts when the wheels start to come off. It was obvious watching Collin on Sunday, painful in an empathic way.

Bobby Jones once said: “Golf is not a fair game but it is an equitable one”! Translation: We are all playing the same game, the bad breaks will be balanced by the good breaks and vice versa. Bad breaks are entirely random; “Why do I get all the bad breaks” is a foolish question and says everything about the player asking it and absolutely nothing about the game. The game is forever a window into the character and soul of the person playing it. Accepting bad breaks and recognizing good ones lies at the heart of every “true” golfer.

I once played with a fella who cold-topped his first drive of the day. He turned to me and said: “this course gets me every time.”  Think about that for a minute!

So…it’s likely Collin Morikawa will learn from what happened to him in Hawaii because he will not see it as “something or somebody has it out for me.” No, more like, “back to the drawing board” for me and my game. Personally, I’d like to see him bounce back right away, but then again perhaps bitter lessons are learned more slowly, over time and reflection. But the lesson is clear for golfers everywhere: bad breaks, poor play, bad days are just as much a part of the game of golf as driving, chipping or putting. If we don’t accept that, it’s time to try another sport…but then maybe that game will have it “out for you” too?

Dennis Clark is a PGA Master Professional and seven-time PGA award winner, including Teacher of the Year and Golf Professional of the Year. Dennis is available for private instruction at Eagle Lakes Golf Club. He can be reached at 239-777-6043 or dennisclarkgolf@gmail.com.