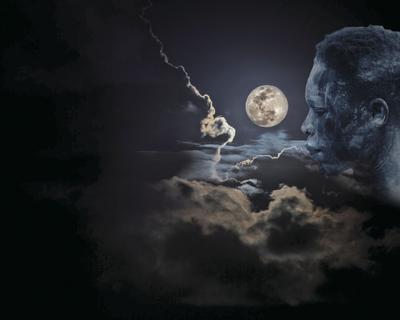 When the dark shadows of October begin creeping in for new corners to conquer, and the bright sunshine of summer seems to have wandered away, The Marco Beach Boys and Girls have always tucked in around a fire pit in search of Halloween stories to stagger the imagination. Some of the tales bubble up only a snicker or a grin, but others are haunting and impossible to ignore. Where there is smoke there is most often a burning ember and when this tale emerged at a Marco fireside, the chilling tentacles of truth made everyone shiver.

After the Second World War, American war ships cruised the Caribbean and much like tourists, the officers and sailors of the U.S. Navy observed the colorful charm and rich social culture of Florida’s island neighbors to the south.

Everywhere, it seemed, when the American ships docked, there was the bright sunshine of the tropics, the beautiful colors of the Caribbean, and the magical and metallic spell of steel drums ringing through the air.

The musical locals of Port-au-Prince Haiti pounded out delicate tones on steel drums made from old oil drums and so did the dockside musicians at Nassau in the Bahamas. Even down through St Lucia, and the spice island of Grenada, as every ship came into port, the haunting melodies hammered out by the local musicians were somehow mocking yet irresistible.

After observing, listening, and becoming captivated by the metallic peal of the Caribbean steel drums, the senior captain of the American fleet decided to form his own steel drum band. He at once collaborated with his morale officers and collected several eager and talented shipboard musicians.

“Sailors,” the senior captain began, “The plan is quite simple. We will form our own steel drum band and perform for the admiral and his staff officers when they arrive for the upcoming tour of inspection. We have 60 days before the admiral arrives, and during that time we must make our own steel drums and learn how to play them.”

All the sailors were excited, morale soared, and construction of the first American steel drums began.

At the next port of call, the leading musician and sailor in charge of the new steel drum unit went ashore and spoke to the local steel drum leader in the Bahamas.

The locals were very helpful and soon the sailors learned how to cut and shape the oil drums to make different sounds with different sizes. The tops of the selected steel barrels were heated, tempered, and individual note bowls were carefully formed. This was the method to ensure that the individual note bowls matched the correct timbre and pitch. The use of a shipboard xylophone was the guarantee that the note bowls were perfect.

After only a few weeks, four of the new American Navy steel drums were flawless and the musicians began to practice. At first, the sailor’s efforts were haggard, but eventually with determination, talent, and tenacity, the U.S. Navy’s first steel drum band began to take shape.

When the senior captain came to listen, he shook his head with disappointment.

“Something is not right,” he complained with a frown all the sailors were afraid to watch. “There is a specific tone sound that’s missing. This is not the sound of the islands. I know we can do better!”

“Yes sir, you’re right,” replied the new bandleader to the captain. “For the full sound we need five drums, but we only have four; there’s one special drum that we can’t make. We have tried and tried but the sound does not come out right.”

“Sailor,” the senior captain explained with fierce determination. “We are the American Navy. There is not anything that we cannot make or do! Our next port of call is Port-au-Prince and when we dock in Haiti, I want you to lead a landing party and find out how to make that missing drum! The Admiral’s visit and the inspection tour will not wait!”

When the ship docked at the old harbor in Haiti, the bandleader and two of the leading musicians went ashore and spoke to the local chief of the steel drum band. The American sailors asked about the missing steel drum and were immediately perplexed, skeptical, and more than a little wary when the local bandleader pulled them aside and confided.

“You can’t have that drum,” the local musician insisted. “That’s a special drum only for the islands.”

“What do you mean special?” the puzzled Americans asked. “Why can’t we have it? The captain has sent us ashore to find out how it’s made and we can’t go back until we have one.” Cautiously, the Haitian bandleader looked around the bustling streets of Port au-Prince. “You make a lot of pressure on the mind man,” the local whispered as he looked for prying eyes. “But if you really must know…the drum of steel that you are seeking is a voodoo instrument made by a witch doctor. This is the drum that makes the sound, which is the hidden thread that weaves the Caribbean together. The steel drum you are searching for can only be made with voodoo.”

“Voodoo?” the sailors echoed. “Come on! Tell us how the drum is really made.” After a moment of deliberation and more than a few U.S. greenbacks exchanged hands, the Haitian steel drum man began his narrative.

After the American sailors reported back to their ship and told the voodoo tale to the senior captain, his retort made the landing party wince. The three sailors were promptly sent ashore again and with much more American money, they convinced the Haitian bandleader to lead the way far up into the trails and the mountains of Hispaniola. Eventually the sailors came upon a distant but tiny Haitian village, and under the light of the full moon, at the third hour after midnight, a voodoo witch doctor sacrificed several chickens and used the blood to temper the metal on the U.S. Navy’s first voodoo steel drum.

The three sailors returned with the drum, the steel drum sound was complete, but the visiting admiral was more impressed with the voodoo story than he was with the haunting sounds of the Caribbean steel drums.

Tom Williams is a Marco Islander and the author of two books: “Lost and Found” and “Surrounded by Thunder - The story of Darrell Loan and the Rocket Men.” Both books are available on Kindle and Nook.

Tom Williams is a Marco Islander. He is the author of two books: Lost and Found and Surrounded by Thunder - the Story of Darrell Loan and the Rocket Men. Both books are available on Kindle and Nook.