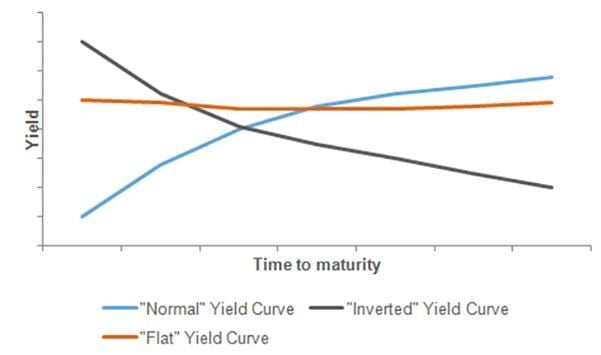 Question: Can you explain an inverted yield curve, interest rates and the M2 money supply?

Answer: First, let’s define what a yield curve represents. A yield curve illustrates the relationship between time, interest rates and risk. The logic is that the longer the term of an investment, the higher the rate of return or interest rate received by the investor. This is because the perceived risk and uncertainty of tying funds up for longer periods of time. The opposite is typically true with lower rates of return for shorter time frames.

A normal yield curve would slope upwards and to the right. Inversion is when something is turned upside down or in opposite order meaning rates are higher for shorter periods to time. There are three possibilities for a yield curve: normal, flat, and inverted.

Federal Reserve Chairman Jerome Powell told us that the Fed will continue raising interest rates to combat inflation, meaning the cost of capital will increase. The definition of an inverted yield curve is when short-term rates are higher than long-term rates.

Quantitative easing (QE) was used during the onset of the financial crisis of 2007-2008 and kept interest rates artificially low. With this technique, the Fed and Central Banks around the world used low rates to make lending easier in hopes of stimulating economic growth. QE was a new tactic, and the long-term consequences are still not completely known. QE stayed in place keeping interest rates low and then our money supply has exploded since the pandemic in efforts to ease the pain of economic shutdowns, including stimulus checks being given to many Americans.

The yield curve is only one economic predictor, and at the time this is being written, remains un-inverted. Other factors to consider are housing starts, unemployment insurance claims, the Institute of Supply Management’s (ISM) inventory measurement of manufacturing, and inflation, in addition to the yield curve.

A sustained yield curve inversion would be a sign of a recession with a time of slowed growth. With rising rates, risk will be priced more realistically. All else being equal, higher risk ventures will have to pay higher interest rates to investors.

What the Fed does next matters. If rates go up too much, a recession becomes a self-fulfilling prophecy. The Fed does influence financial markets. For instance, when the Fed raised rates in December 2018, markets responded with dismay, just as they are doing this today.

Higher interest rates are intended to slow economic activity and curb inflation. For the last thirty years, interest rates have been driven more by prices and the job market. The common measure of money supply is called “M2”and consists of all cash in circulation, checking account deposits, money market accounts, and assets that can be quickly and easily converted into cash.

The relationship between the yield curve, interest rates, and the money supply has become problematic because money supply growth far outpaced economic output growth. This leads to inflation which is too many dollars chasing too few goods. This unpleasant reality is a result of rapid growth in our money supply and slowed economic activity.

Balance and moderation on all fronts are prudent practices. Ultimately, when not controlled by artificial means, interest rates are a proxy for risk. Higher interest rates and a more restrictive money supply mandate are intended to cool inflation. Time will tell. Stay focused and plan accordingly.

The opinions expressed are those of the writer as of June 16, 2022, but not necessarily those of Raymond James and Associates, and subject to change at any time based on market conditions and other factors. Information contained in this report was received from sources believed to be reliable, but accuracy is not guaranteed. Past performance is no guarantee of future results.

design) and CFP® (with flame design) in the U.S., which it awards to individuals who successfully complete CFP Board’s initial and ongoing certification requirements.”