Young Dolphins of Marco Island It’s All About the Babes 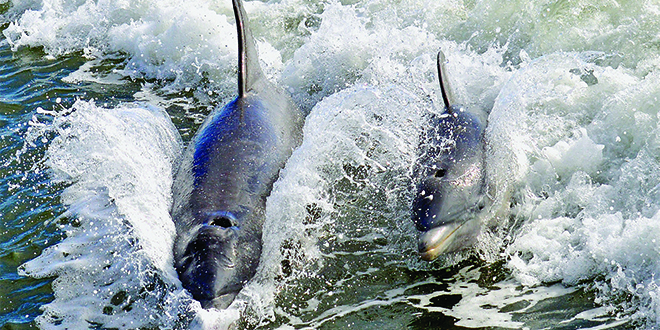 Submitted Photo: Mom and newborn hitch a ride in the wake of a boat.

The Rose History Auditorium was the place to be for the recent Marco Island Historical Society presentation of “Young Dolphins of Marco Island,” by certified Florida Master Naturalist Bob McConville. This renowned speaker is always known to draw a packed crowd, so it was indeed imperative to arrive early. But the audience did not wait idly as they were treated to an entertaining show time countdown with a nostalgic newsreel of commercials and public service announcements from the 1950s and early 1960s, designed by local creative genius Steve Gimmestad.

Once the show began, the audience was mesmerized by McConville’s tales, triumphs and transparencies of local dolphins. McConville, the owner of Stepping Stone Ecotours, is also a naturalist for a local dolphin survey team that is conducting a long-term study of the movement, abundance and behaviors of bottlenose dolphins in Southwest Florida.

These marine mammals are fascinating in their social skills, mating rituals and family life. With a gestation period of 12 months, both the mating and birthing seasons of our local dolphins occur in the fall. Although the males are actively present for mating season, they tend to leave the mother dolphin to raise her babes on her own.

After the mother dolphin endures 12 months of pregnancy, the birthing process lasts about 45 minutes. Dolphins are born tail first. Once the mother dolphin gives the final push to bring the baby into the marine world, exposing the blow hole from which they breathe, she assists the newborn to the water’s surface for the life 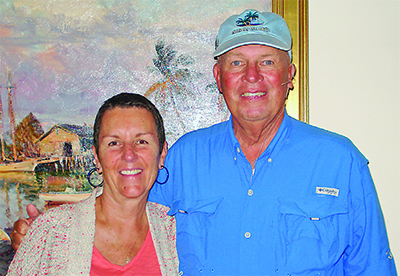 giving force of oxygen. The baby dolphin, known as a calf, has a ridged tongue to attach to the mother’s mammary port. Mom then pushes the milk to her baby. Once the calf develops teeth, Mom teaches them to fish on their own. The calf stays with the mother for three to four years.

As calves, dolphins are faced with several threats from the sea. Sharks are known to attack some babies. Male dolphins in pursuit of a female are also known to attack the calves. However, the instinctively protective mother dolphin will deliver a defensive resounding bump to anyone who threatens her young.

The age of a newborn dolphin may be determined by fetal folds that appear as lines on the sides of the baby’s body. Baby dolphins are like puppies and kittens who like to play. They nip and tuck at each other’s dorsal fins. This childhood play actually creates an identifying feature for the dolphins. The resulting notches on the dorsal fin serve as a unique fingerprint of identification.

On board the Dolphin Explorer, a catamaran that hosts the dolphin survey and offers passenger tours, several local dolphins have been distinctly recognized and identified by name. If a newborn is spotted by the Dolphin Explorer, passengers have been asked to name the baby. One newborn who was first seen on September 11 was given the name Freedom. Other local dolphins are named Bubbles, Skipper, Ollie, Capri and Lucky Charm. One notable dolphin is Giza. She is actually a grandmother, but keeps her pectoral and 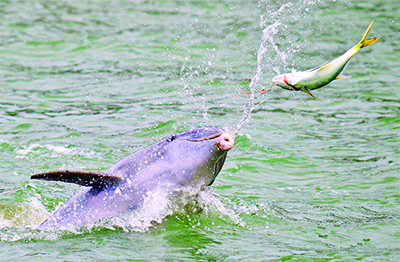 Adult bottlenose dolphin tosses a fish near the Jolley Bridge.

tail fins, the dolphin’s main instruments of movement, in great shape. She is still leaping with the young ones. Now that’s a real Marco Islander!

Once a calf stops nursing, the mother dolphin’s hormones change and she can become pregnant again, repeating the miraculous circle of life. In our local waters, there are three dominant male pair bonds that will trail a female. When the lady is ready, they are there for business!

Dolphins are a playful sort and have even been known to have family reunions where mom and her offspring reunite for good times and fun!

Just like all families, there have been times of crises in the lives of our local dolphins. Mocha was a baby when its mother was injured by a boat. Mom was pregnant at the time. She healed and later gave birth to Ollie, Bubbles and Skipper. In another incident, several marine agencies and volunteers were called to assistance when a calf was injured by a fishing line impaled on its tail fin. Because of the protective instinct of the mother, both the calf and its mother had to be captured in a net for the team to remove the line. Hands of help proved to be hands of healing, as the rescue was successful!

Bob McConville brings our natural habitat to life for the people of Southwest Florida. If you missed this presentation, do not despair as he will be giving presentations each month throughout the season. Coastal Breeze News will keep you informed.