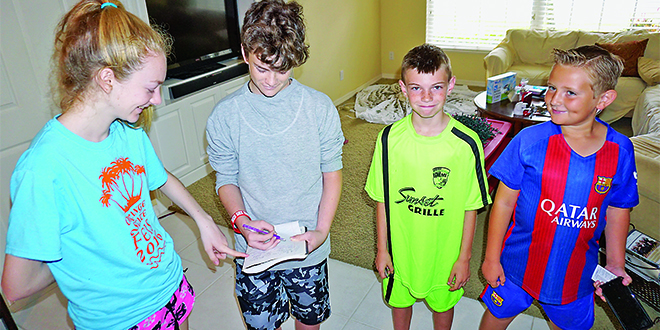 From left: Kaitlin and Jack Creedon sign the petition presented by Blake Parker and Chase Hanrahan.

In the January newsletter for Tommie Barfield Elementary School (TBE), Principal Kary Stewart announced that the gold, silver and bronze honor cards that had been awarded to students for academic excellence would be discontinued. The cards rewarded students receiving A’s and B’s with movies tickets and discounts at local restaurants and businesses.

The cards have been around for many years as an incentive for students to earn high marks. After the announcement was made that the cards would be discontinued, parents and students were vocal about their disapproval.

Two fourth grade students at TBE, Blake Parker and Chase Hanrahan, took action to have their voices heard. Blake and Chase work hard, get good grades, and have been honor card recipients. The boys were so upset about the change in policy that they became activists. With the help of Blake’s grandmother Rose, they set up an online 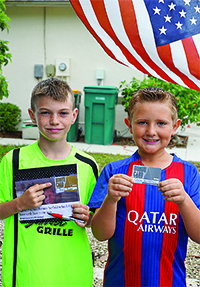 Photos by Jessica Hernstadt Blake Parker (left) and Chase Hanrahan became activists after the honor cards were discontinued at TBE.

petition to reinstate the honor card system at Tommie Barfield. The “Give the honor cards back to our kids” (www.change.org/u/5434060) petition has already gathered 234 signatures in support. The two are also taking the petition door-to-door, hoping to reach 500 signatures.

Kelly Creedon, a neighbor of Blake’s, and a parent, signed the boys’ petition, saying, “I can’t tell you how much the card motivates my son.” Kelly’s son Jack is in eighth grade at Marco Island Charter Middle School, which continues to use the honor card system. Kelly was in favor of the honor card system, adding that the kids need to have “pride in their good grades- they need motivation.”

Blake told me that taking away the card was frustrating, because “if we work hard in school, we earn the card.” He said he looks forward to using the card to go to the Marco Movie Theater the most. 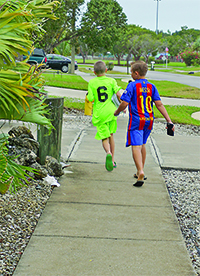 Blake and Chase go door-to-door collecting signatures on their petition.

expressed these sentiments, shared by many in the community: “Our kids work hard in school and look forward to their rewards cards, why should they be taken away because some kids don’t get them. It is not fair to the ones that try so hard.”

Principal Stewart also explained that there will soon be a meeting of staff to determine their new criteria, and a parent and business meeting will be scheduled as soon as they complete the new plan.