You Got It…Oysters Rockefeller Chowder! 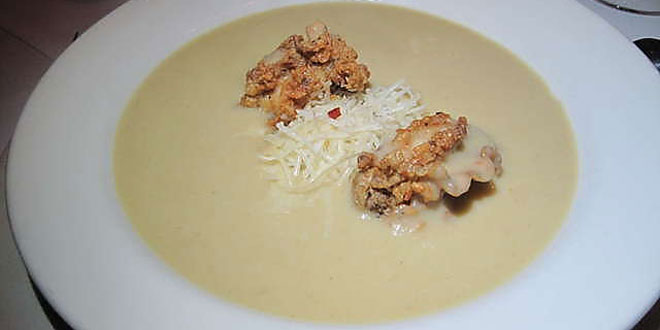 History tells us Oysters Rockefeller was created at the New Orleans restaurant Antoine’s. Antoine’s was founded in 1840 by Antoine Alciatore, who moved to New Orleans after two frustrating years in New York trying to open a restaurant of his own. It is the country’s oldest family-run restaurant. The dish was created in 1899 by Jules, the son of the restaurant’s founder.

Oysters Rockefeller was named after John D. Rockefeller, the richest American at the time, because of the intense richness of the sauce. Though the original recipe is a secret, the sauce is known to be a combination of a number of green vegetables including spinach. It consists of oysters on the half-shell topped with the sauce and then baked. Jules Alciatore developed Oysters Rockefeller in the face of a shortage of snails, substituting the locally available oysters for snails. Antoine’s has been serving the original recipe dish since 1899. It is estimated that Antoine’s has served over 3.5 million orders.

As an Oysters Rockefeller lover, I have sought out a recipe to bring all the flavors together and create a delightful chowder. The flavors of celery, onion, garlic, parmesan cheese, spinach, anisette (the licorice flavor) and the beloved fresh oyster.

Whisk together the cream, cornstarch and cayenne pepper and slowly stir into the saucepan. Cook until thickened and bubbling. Stir in oysters and anisette and heat thoroughly, but do not boil. Makes 8 servings. Enjoy! Happy cooking, from our Family to Yours. Chef Annie and Family