For those of you who have ever gone into a casino, a Marco Island author has just published a book which you may want to read.

As an award-winning Chicago television investigative reporter, Peter Karl investigated everything from political, judicial and corporate corruption, police misconduct, nursing home fraud, medical malpractice, to prostitution. Now retired and living on Marco Island, Peter has turned his talents to the game of blackjack. “I put my name on it to give it credibility,” Karl said. “It’s hard to tell someone how to gamble with their money.”

The book entitled, You Can’t Win…UNLESS, is believed to be the first investigative look at the game of blackjack.

“If you don’t count cards you have very little chance of winning,” Karl said. “The odds are always in favor of the house, that’s why they throw card counters out of their casinos, they don’t like to lose.”

Karl no longer cares if he is not allowed to play in casinos. He thought the book was a good way to help regular players understand the odds and to give them some very helpful tips.

“I don’t care how good you think you are, you are never going to win every time you play blackjack, Counting gives you an edge at times, but I can’t even begin to tell you how many times the shoe is negative. You will never win in negative shoes over time.”

Karl says he “pokes fun at himself” in the book. “I went to Gamblers Anonymous a long time ago when I lost what I thought was a healthy sum of money after I was first divorced. It was a great learning experience and the GA people are absolutely fabulous. I stopped gambling for a long time and then read the book, Bringing Down the House. That’s when I started this investigation.”

“I literally hand charted (kept track of) tens of thousands of hands of blackjack that I played at my kitchen table for more than a year. You can see it is very hard to win in a 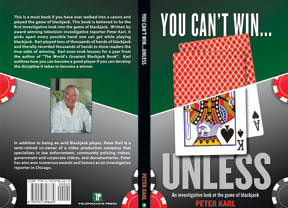 six deck card shoe,” Karl said. “I also studied for more than a year under Lance Humble, the author of what many consider one of the best books ever written on blackjack, The Greatest Book on Blackjack.”

Karl tells the story in his book about a gaming venture he had in an Indiana casino where the dealer was cheating for him, telling him when to take a card and when not to. Karl said, “I was playing a $100 table betting one to eight hundred dollars a hand and I never busted (meaning he never went over 21) I lost $4,700 in three shoes in 45 minutes.”

“I outline a number of things to look out for even if you don’t count cards,” Karl cautioned. “There are many signs to tell you when to stop playing at a table, for instance, if the dealer constantly gets multi-card 21’s, or you lose all your splits and double downs, the house is hot, get out.”

A theme that Karl often points out in his book is, “If the house is hot, you don’t have a shot.”

“My book tells people not to get greedy. You can bring down the house one brick at a time. From my research, you do not see people winning great deals of money at any given time, and the longer they play, the more they give back. Another theme in my book is “In and Out.” Once you get ahead you should be ready, willing and able to walk away a winner.”

Karl hopes to have a book signing on Marco and to meet with people to answer any questions they may have. “This book can save you some money and don’t ever gamble money you can’t afford to lose,” Karl warns.

Those interested in reading his book, You Can’t Win…UNLESS, can order it on line at Amazon.com. It is also available in paperback.

Karl is currently working on another book involving one of the most horrific homicides ever committed in the City of Chicago.

One response to “You Can’t Win…UNLESS”