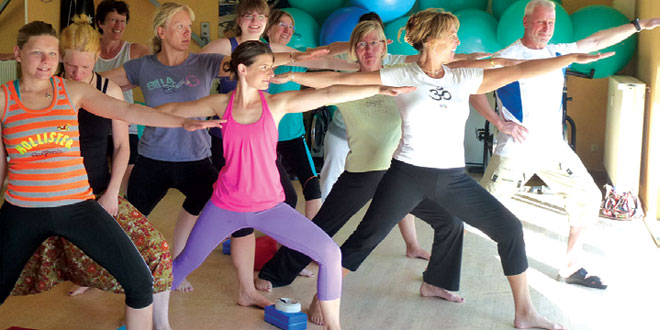 Standing before a dozen eager German faces who were ready to take a yoga class with the visiting “American Yoga Instructor,” I was humbled.

I was informed that most of them would know English to varying degrees and took note to speak slowly and clearly. Yoga has its own language (thankfully!). I began then to wonder about the language barrier and the ease (or not) in which this class would be for them as students, and for me, as a teacher.

The day before I was scheduled to teach, I took a class as a student in a German only class. It was ironic how the lovely teacher’s opening sequence was so similar to the one I had just put together to begin my class the next day! Her flow of the asanas (poses) were closely in tune with my usual flow. Her style was very approachable and I began to emulate her series, slightly frustrated at not being able to understand the verbal cues she was giving. She was gentle and soft spoken, and I

The “tree position.” These “German trees” stand tall, reaching their branches to the sky.

fell into the groove of her class, her students and the energy in the room. Any irritation of the language barrier melted away to the sweet sound of her voice and grace.

Yoga connects our breath to our bodies. Yoga is a universal language because breathing is a universal experience to all beings. These were my thoughts the following day as I stood before the expectant and smiling students, whom I figured knew some English, but wondered just how much. So, all I needed to do was breathe and move. I had learned this before with two lovely students from Latvia who knew little English a few months ago, back on Marco Island.

It was an amazing experience, seeming familiar and rather reciprocal in nature, when looking back on my “German only” class the day before, and their “English only” class they were now experiencing. We assimilated the yogic aura in the room, open and full of peace as we went through the flow of the asana and simply breathed together. Yoga does have its own sacred and very pure language, 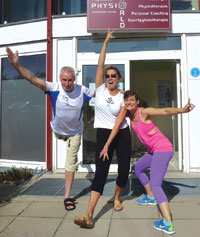 Having some yogi fun! PHOTOS BY DIANNE SAYWELL

and it is indeed universal as I have said before – beyond words.

There was a big sense of lightness as they filtered out of the studio and little exchanges were heard; little nods and smiles. The owner of the studio space, the lead teacher, and I ambled to the front door with my good friend Joerg interpreting for us since the owner himself knew very little English. In the spirit of fun we posed in front of the building and then decided to make a crazy free spirited pose because we felt that light and happy! It was wonderful to share the same spirit, allowing us to be open, free and full of laughter… another universal language.

Dianne Saywell works full time at a local dental office where she educates and helps maintain the oral health of the patients as a dental hygienist. She also spends her time introducing people to and sharing the healing power of YOGA, and the health it brings to the body, mind and spirit. Yoga, along with many other great classes, is offered at Healthy Body/Marco Fitness Club.