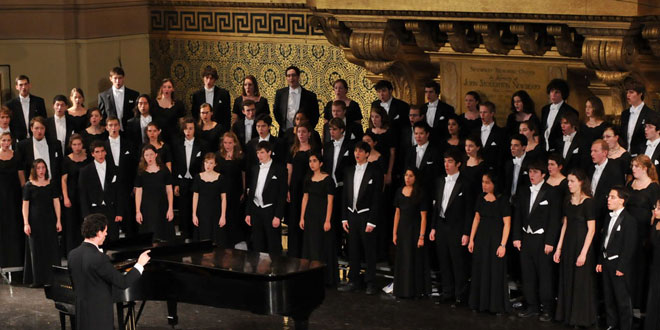 The ArtsNaples World Festival is pleased to announce that they will host the Yale Glee Club in concert at the North Naples United Methodist Church on Saturday March 8, 2014 at 7:30 p.m. The concert will feature works by Brahms, Victoria, Tavener, new works by Timothy Laciano ’15, Winslow & Morrison, folk songs, spirituals, and of course, Yale original songs.

One of the most traveled choruses in the world, the Yale Glee Club has performed in every major city in the United States and embarked on its first overseas tour in 1928. It has since appeared before enthusiastic audiences throughout North and South America, Europe, Asia, Australia, and Africa.

Tickets for the Yale Glee Club’s March 8 performance are just $35 per person for premium seating and $25 per person for general admission. The North Naples United Methodist Church is located at 6000 Goodlette-Frank Road in Naples.  For more information or to purchase tickets, please visit www.YaleClubSWFL.org, or call 800.595.4849.