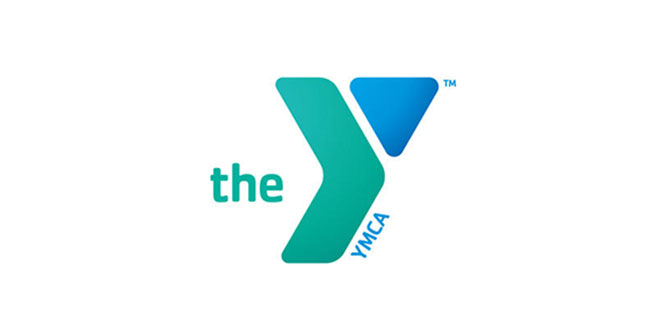 Shades of the recent Rio Olympics came to the Greater Marco Family YMCA recently when staff members combined to offer tastes of swimming, basketball and tennis to youngsters who might not have tried them before.

“We decided we wanted a family fun night,” said the Y’s Healthy Living Director, Deborah Passero. “The kids were from 3 years old and up, and what we saw was a great turnout. We combined all our departments (business, swimming, tennis and after-school), blending people who work here together. It’s the way to become stronger together.”

And certainly to inspire kids to maybe take up one or all of the three disciplines.

Mom Ashley Heflin and her husband had brought along their three children, Brinley (7), Brysen (5) and Hadlie (2), and they watched the three sporting disciplines with interest.

“Brinley is good at dance takes classes, but today I noticed that she was really good at tennis,” Heflin said. “It’s definitely something we’ll look at.”

The tennis section, organized by resident Y tennis director Roberto Saad, introduced the youngsters to the absolute basics of the game in the form of a relay race. He had them run from the net to a basket of balls at the serve line, hit a ball over the net and then hand over their racquet to a team mate.

Most managed to hit over the net on their first attempt, and those who didn’t persevered until they did.

“I loved the afternoon,” said Heflin. “It’s good for the kids to be around others doing healthy things and exercising their bodies. They’re going to be talking about this for a long time.”

For the basketball session, the kids were also divided into teams, and although there were more whoops than hoops, 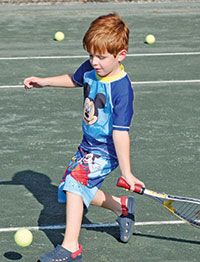 Eamon Burts sweeps at low bounce during one of the tennis relays.

the atmosphere was infectious. One pint-sized participant, for example, only managed to throw the ball half-way up to the net, but he received just as much applause for his effort as the slightly bigger and stronger kids.

Over at the pool, the youngsters joined teams fronted by competitive members of the Y’s swim team for 25 yard lengths.

Biggest cheer of the afternoon went up for young Eamon Burt, who gamely swam a final freestyle leg in a time his champion swimmer sister Madeline could probably swim four complete lengths, but his time will come. Madeline, incidentally, currently holds the state record for her age group (14) in butterfly.

And prophetically, given the observation of Ashley Heflin about her daughter’s possible tennis playing potential, Passero said: “Maybe we’ll see a spark of light in some of the kids’ hearts, whether tennis, basketball or swimming.”

“I saw a lot of kids running around very fast on the courts,” he said. “They were really enthusiastic.”

All that exercising understandably made everyone hungry and thirsty, and right on cue at the end of the events, volunteer Michael Passero dished up an array of healthy food that included watermelon wedges, salads and burgers with a twist – ground turkey burgers that included cilantro and olives.

Sure, there was plenty of competitive spirit during the “Y Olympics,” but the underlying aim was socializing and camaraderie.

“Actually, it was mostly fun,” said Deborah Passero, who is also the Y’s exercise physiologist, and who is clearly pretty much a fun person herself.