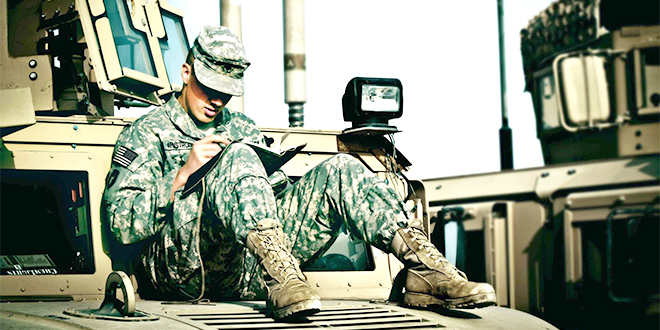 Marco Island’s 2016 Veterans Day ceremony at Veterans Community Park will be a notable one for several reasons.

Welcome Home! To Vietnam Era Veterans will be the theme of the annual event that celebrates the contributions and sacrifices of America’s servicemen and servicewomen. Set for 11 AM-12 PM, November 11, this will be the first Veterans Day ceremony to be sponsored by the City of Marco Island.

Attendees will also have the opportunity to personally brighten the day of America’s military members by writing letters that will be collected at the ceremony and sent to them. The letter writing campaign is the idea of Samantha Malloy, who was inspired by a friend asking whether her daughter Alexis, 9, would write a letter to a soldier.

“I just thought it was a great idea and that there’s no better time to do it than now,” said Malloy, who is the city’s community events coordinator. “I want to let the soldiers know that there are a lot of people out there who appreciate their sacrifices and all that they do for us.”

A box for the letters will be situated on a table at the ceremony’s entrance and Malloy will gather them up and mail them, at her expense, to A Million Thanks, a California-based  nonprofit. A Million Thanks supports active, reserve and military veterans by sending them letters of thanks and encouragement whether they are at home, abroad or being treated in a hospital.

Malloy has also arranged to secure letters from students at Tommie Barfield Elementary School and their families. If someone wants to send a letter, but will not be attending the Veterans Day ceremony, Malloy will pick it up and mail it to A Million Thanks. She can be reached at 239-389-3917.

“I plan on packaging them up and mailing them to A Million Thanks, and they’ll mail them out to the soldiers for us,” said Malloy.

WWII veterans were honored at the 2015 Veterans Day ceremony.  This year’s event will honor the sacrifices of vets who served from April of 1961 to August of 1975, the federal government’s time frame for the Vietnam conflict.

“Personally, as a commander of (Marco’s) American Legion Post, I’ve always felt that Vietnam-era veterans have never officially been welcomed home,” said Lee Rubenstein, a Vietnam era veteran. “In fact, it was just the opposite. The American people didn’t show much appreciation to these men and women for their service. This shows that the City of Marco Island wants to thank and officially welcome home the Vietnam era veterans in the community, even though it’s 50 years later.”

The ceremony honoring America’s service men and women will include a Tribute to Vietnam Era Veterans highlighted by:

As with last year, the ceremony will be a blended affair involving all four of the island’s military organizations: American Legion Post 404, VFW Post 6370, U.S. Coast Guard Auxiliary Flotilla #95, and Marco’s Civil Air Patrol squadron. Representatives of each organization will comprise a color guard bearing the flags of the four military groups, while the American flag will be carried by members of the city’s police and fire-rescue departments.

The ceremony will also include:

For the first time, the city will cover the cost for renting the tents and chairs that will be used for the ceremony, which, in the past, had been funded by the island’s veterans groups through public donations.

“When a veterans’ event is held in a city park, it is common for the host city to sponsor Veterans Day and Memorial Day ceremonies,” said Roger Hernstadt, Marco Island’s city manager.

Rubenstein said that with the ceremonies being held at Veterans Community Park, “it was only fitting that the city would play a key role in support of the programs.

“I think it gives more credibility to both Veterans Day and Memorial Day that the City of Marco Island supports the veterans, to ensure that a quality program is put on,” he added.