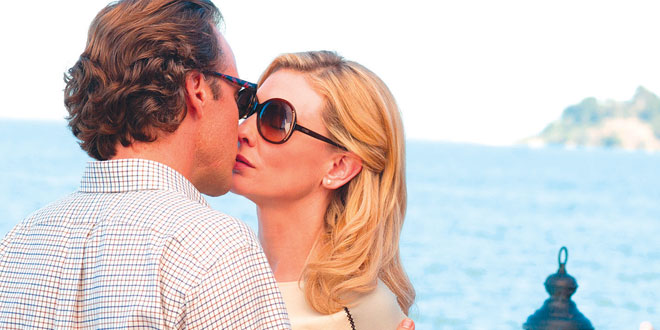 From the moment we first see Jasmine (Cate Blanchett) we’re entranced, even though she’s talking to herself and her neighbor on a flight from New York to San Francisco. Jasmine is dressed to the nines in Chanel and a huge Hermes purse. That’s all accompanied by monogrammed Louis Vuitton luggage awaiting her on the carousel. What follows are flashes backward and forward as it becomes clear that Jasmine has left the Manhattan high-life destitute and is moving to San Francisco to live (temporarily?) with her sister, Ginger (Sally Hawkins). If all this hints of Blanche in “A Streetcar Named Desire”, it’s partially correct. Jasmine is bewildered by her situation, self-delusional, alcoholic and addicted to Xanax by the carful.

Jasmine (nee Jeanette) has enjoyed being immensely rich and heavily indulged in Manhattan and the Hamptons. Her husband, Hal French (perfectly portrayed by Alec Baldwin) is a smoothie. He’s all glitz, glamor and guile; and quickly comes across as a Bernie Madoff type who has parlayed the stock market and business world into a fake world of wealth and a real world of tax fraud. Along the way he has bedded countless cuties, including a teenage au pair.

When Jasmine learns of the deceit she also finds out the she is penniless, and now has nowhere to turn except to her sister who lines in the rundown Mission district of San Francisco. Jasmine is alternately terrified, angry, and on the verge of madness. As Jasmine, Cate Blanchett is compelling and masterful. Beginning with her attempt to explain why and how she was able to fly first class when absolute broke, to her pathetic attempts to rationalize her status and talent, to her flirtations in an attempt to find another rich guy, we are mesmerized by her. Everywhere she turns, things just don’t go right, including a hilarious scene in the dentist’s office where she tries – half-heartedly – to be a receptionist.

Woody Allen’s comic genius touches various parts of the story, but it is a tragedy, as Jasmine cannot accept reality and sinks further toward madness. The juxtaposition of the scenes ranging from the lush cocktail parties, beach interludes and, even a polo match, to the seediness of South Van Ness in a cramped apartment with a sister and two chubby vacant faced kids is startling. Jasmine lies, not only to herself, and to others, as she cannot face reality.

The audience, much of which applauded loudly at the end, attested to just how well this tale plays out on the screen. It may well be Woody Allen’s masterpiece. It certainly is one of the finest in many a moon.