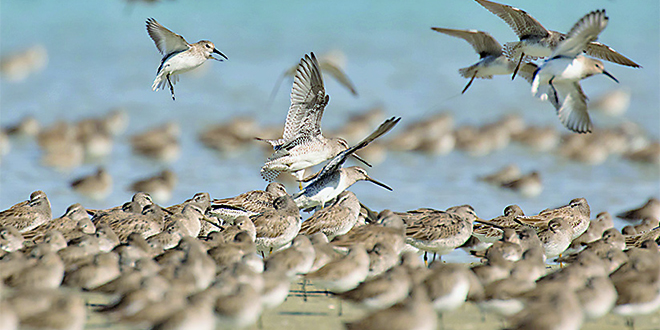 A mass of shorebirds uses the Big Marco Pass/Sand Dollar Island to roost.

Early one morning in March, at low tide, Alli Smith, intern biologist and Collier County anchor steward for Audubon, Florida was on Sand Dollar Island for a bird survey. She was hoping to catch Wilson’s plover in their courtship rituals.

She started at Big Marco Pass (locally known as Sand Dollar Island) and walked the lagoon side south. She came upon a few piping plovers and started her count. For her, it was fun to see them transitioning into their breeding plumage before they leave the area. Piping plover is a federally protected species and the Big Marco Pass Critical Wildlife Area (CWA) has been identified as critical habitat for over wintering population of the piping plovers. They do not breed here but will soon be heading north to their breeding habitat.

Here on Big Marco Pass, it’s possible to see snowy plovers, piping plovers and Wilson’s plovers all in a morning’s walk. They are all similar in size and color, but to a practiced eye like Alli’s, they do have subtle differences.

Critical Wildlife Areas were established by the Florida Fish and Wildlife Conservation Commission (FWC) to protect important wildlife concentrations from human disturbance during critical periods of their life cycles. The area known as Big Marco Pass/Sand Dollar Island was designated by the state as a CWA on January 18, 1988.

Big Marco Pass is a rare and fragile barrier island system, which provides resting, nesting, feeding, foraging and breeding areas for a number of 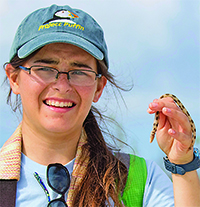 migratory and resident bird species. Loggerhead turtle nesting also occurs on this gulf beach. The lagoon is also a rich breeding ground and habitat for invertebrates such as mollusk, sea horses and juvenile fish.

According to Brad Cornell of Audubon of Western Everglades, “Marco Island’s Sand Dollar peninsula and Tigertail Beach is one of the most biologically productive coasts in the entire State of Florida. With many hundreds of terns, skimmers, plovers and sea turtles laying eggs on the beach each spring and summer, and thousands of winter birds, this is a natural spectacle few places share.”

At Donna Fiala’s Town Hall Meeting on February 23, 2017, Gary McAlpin, director of the county’s Coastal Zone Management announced plans “to build a low level crossover boardwalk that would extend over the Tigertail lagoon and the bird sanctuary.”

In 2006, Collier County Parks and Recreation spent more than $200,000 in a study to build a crossover walkway over the Tigertail Lagoon. This project was met with obstacles and opposition and was withdrawn.

In 2013, Collier County Parks and Recreation tried to revive the project. This project also came before the Marco Island Planning Board. In September 2013, Barry Williams, director of Collier County Parks and Recreation, wrote in a written statement, “A lagoon crossover will not be considered.” Nancy Payton of FWC was pleased that “the project was not feasible environmentally and engineeringly.”

Does the benefit of a crossover bridge over Tigertail Lagoon outweigh the loss of a rare, sensitive and unique ecological environment?