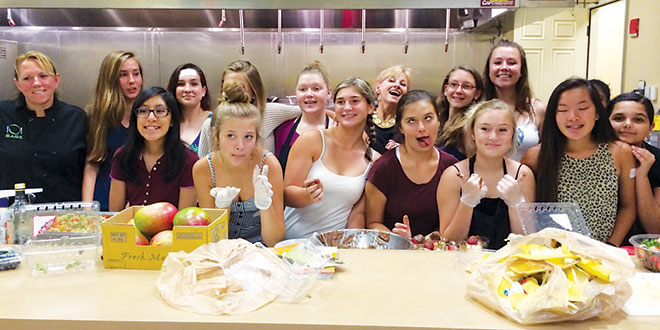 The girls pause for a moment of revelry as they prepare the Family Celebration Dinner.

Deborah Passero entered summer with a sense of anticipation regarding the return of the Wonder Girls this fall.

The program, a partnership between the Greater Marco Family YMCA and MICMS, debuted this year, running for 12 weeks, from early February to late April. It will return in the fall, with the first meeting for participants set for Aug. 18.

Passero said the 22 young teens who took part showed measurable improvement physically from a regimen of twice-a-week meetings that included exercise, education about nutrition and more. She said they also grew immeasurably when it came to gains in self confidence, making healthy choices, self respect and respect for their peers.

“What can we do for kids to give them a voice, to 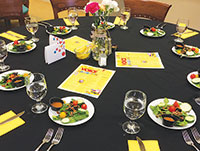 give them a safe place to experience improving their health and fitness, and then get to the things that they’re struggling and deal with them.”

Wonder Girls is the brainchild of Passero, who operated a similar program in Michigan before moving to Marco one year ago with the hope of also working with teen girls here. “All of the sudden, I started meeting people and we started brainstorming and everything just fell into place for this program,” she said.

The program’s component parts: nutrition, exercise, self respect and healthy choices, were addressed through instruction and practice exercises at two-hour long sessions held weekly at the Y or MICMS. Those gatherings saw the girls engaged in such activities as:

There was also instruction in such topics as self respect, being a role model, media stereotypes of women, cyber bullying and the importance of perseverance.

Passero said she and the other instructors shared stories and photos of their awkward teenage years to help establish trust early on in the process and assured the girls that whatever was discussed in the sessions, stayed there.

“We talked about their self image, but also deep inside them, who they are,” she said. “We talked about self awareness and that it’s not about whether their skin is brown or their hair is red or their eyes are green. It’s about what comes from their heart and what they like. We really tried to promote that in many different ways. I guess it’s a program that’s all encompassing – the whole person.” 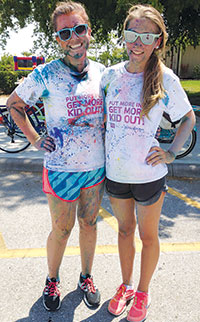 Perez, who will attend Marco Island Academy in the fall, said she now realizes that she is not as shy as she had believed and that she possesses the ability to open herself up to others.

“I’m not the way I thought I was,” she said. “When I became more open, I changed and I became something I never thought I’d become, in a positive way. I learned that beauty is a characteristic that you have inside. It’s what you have to offer, but it’s not just the outward appearance.”

Itayem, who is headed for Gulf Coast High School, echoed Perez’s sentiments, while adding that Wonder Girls has heightened her optimism about the future.

“I learned that I can do great things in life if I just learn how to accept myself and to accept others for who they are,” said Itayem. “You can go a long way just by being yourself.”

The participants completed a closing survey that had them assess their growth over the previous 12 weeks.

“The words on the paper say they learned

A physical manifestation of the solidarity fostered by the Wonder Girls program.

a lot about themselves,” said Passero. “How did they change? They learned a lot about who they are and that it’s OK to be that way. Many of them said, ‘I feel like I’m going to OK.’ They changed by accepting themselves more and accepting others, because in order to have a friendship, you have to accept a person for who they are too.”

Wonder Girls will be offered again in the fall and next spring, it will be joined by a male counterpart, Wonder Boys, which will also be for eighth graders.

How To Get Involved

Passero said and the Wonder Girls staff needs adult men to oversee the Wonder Boys program. ìIím hoping thereís a male contingent because I canít teach boys how to do it,î she said. ìIt really needs to come from a male perspective and I can help oversee it.î

For more information about Wonder Girls and Wonder Boys,
to sign up or to volunteer, contact Passero at 394-3144,
ext. 222 or healthyliving@marcoy.org.

For more information about
how you can support the YMCA, call Cheryl McDonnell at
394-3144 ext. 204 or visit greatermarcoy.org.