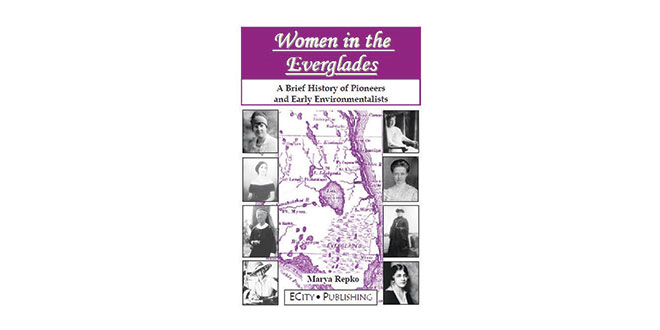 Local author Marya Repko encapsulates information from her previous Brief History books but adds much more as she summarizes the role of women in the settling of South Florida from the east to west coasts and around Lake Okeechobee.

After describing the hardships of pioneer life, the book cites examples of how women took a leading role on environmental issues, even before they could vote. There are numerous historic photos, a timeline, a list of further reading, and brief biographies of some of the key people. The book provides a great overview of how rough it was for pioneer women in South Florida: ever persistent mosquitos, eking out an existence, the loneliness and hardships faced by women who not only endured but prospered, and in doing so created the Florida we know today.

We owe a lot to these strong women and this book, with a glimpse into their lives, opens a door to discovering Florida’s rich history. Craig R. Woodward, Chairman Collier County Historical & Archaeological Preservation Board.

Marya Repko grew up in Hadlyme, Connecticut, but lived most of her adult life in Europe as a software engineer. After retirement, she moved to Everglades City, Florida, where her first book “A Brief History of the Everglades City Area” has sold thousands of copies. Other brief histories of Deaconess Harriet Bedell, Marjory Stoneman Douglas, the Fakahatchee, and Sanibel have been well received, as have the children’s version of the Everglades and Sanibel books. Marya is president of the Everglades Society for Historic Preservation and newsletter editor for the Friends of Fakahatchee.  “Women in the Everglades” may be ordered online at: www.ecity-publishing.com.