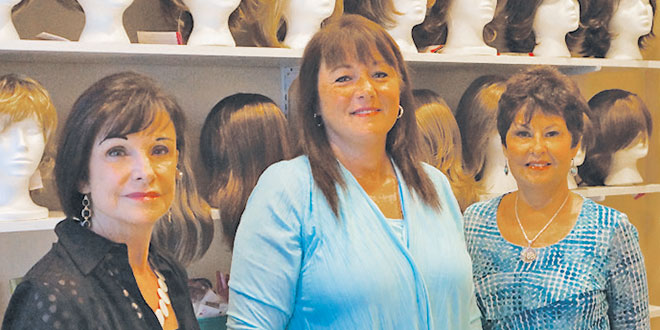 “Why you are born and why you are living depends on what you are getting out of this world, and what you are giving.” This is the motto of the Marco Island Woman’s Club, and the women clearly live up to its sentiment.

The Woman’s Club recently made donations to a multitude of educational and charitable organizations which benefit Marco Island residents. Marco Island’s American Cancer Society office was a lucky recipient of one such donation. With the Woman’s Club’s generous donation, the American Cancer Society purchased 27 wigs, 12 turbans and 40 wig caps, all to be provided at no cost, to cancer patients undergoing chemotherapy.

For Woman’s Club President Penny Weidner and past-President Sharyn Kampmeyer, this cause is personal. Penny’s daughter is a breast cancer survivor. Sharyn lost her mother to lung cancer. In Penny’s words “Nobody knows what it’s like unless you have gone through it with a mother, daughter or friend. You can’t explain it.”

Sharyn emphasized that the club “wanted to specifically help someone on the Island.” They also had many club members, family and friends battling cancer. They reached out to Sue Olszak, Community Manager Relay for Life, at the American Cancer Society on Marco Island. While visiting the American Cancer Society (ACS) office to discuss a donation, the ladies saw that the wigs in the resource room were sorely outdated. They knew immediately how they could help.

The ACS wig collection “needed a face lift” according to Sharyn. The old wigs were heavy, dark and unnatural. Sue at ACS explained how the

New wigs line the shelves in the ACS resource room.

new wigs are lighter, more natural in color and texture, and have current hairstyles. The ACS office had received many requests for different color and style wigs. Sue kept those requests in mind when she ordered the new wigs.

For many women receiving chemotherapy treatments, the side effect of hair loss has a profound effect on their psyche. Marco Island’s own Jada Shigley, who received one of the new wigs, explains it best in her thank you letter to ACS and the Woman’s Club:

“Going through treatment for cancer is so difficult and one of the hardest parts for me was losing my hair. I know that sounds silly with everything else you have to battle but it’s true…losing your hair is sort of like losing your identity and your ability to conceal your illness. I want them to know that their contribution will bring confidence to so many women which is so important during treatment. Staying positive and feeling good about yourself is half the battle!”

The Woman’s Club was founded in October 1966 by 16 local women, and now boasts 178 members. Next year marks their 50th Anniversary. They are self-described by Sharyn as a working group of “women helping women.” Except for minimal operational expenses, the club donates back to the community everything it makes during the year.

For more information on the Marco Island Woman’s Club, go to their website www.marcowomansclub.com or email miwcmembers@gmail.com.