Winter in the Big Cypress Swamp 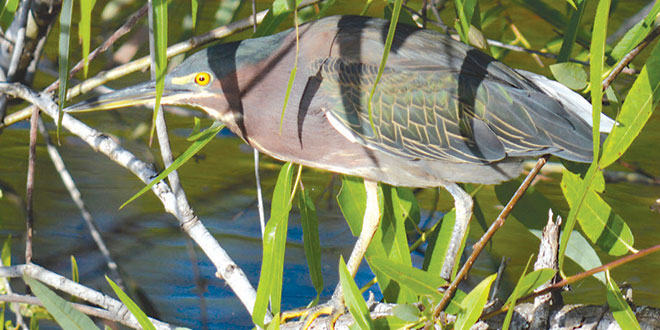 Green heron hides among the mangroves waiting for its next meal.

Ah, the harsh winter climate of South Florida! So blustery, so cold that I had to wear long pants twice last January! I don’t know how people can stand it!

Actually our climate provides a safe haven for many of our northern visitors to escape the cold and snow. These humans will take advantage of the excellent beach conditions, boating opportunities and great eco-attractions to keep themselves entertained over the next four months. Some will also take the short trip, less than thirty minutes, and learn about the fascinating areas just west of the Everglades. One specific region that offers an abundance of potential bird and wildlife sightings would be Big Cypress Swamp.

Here more than 720,000 acres of land is protected. The fresh waters flowing from north to south are essential to the health of the next door neighbor, Everglades National Park and these same waters feed the estuaries at the south end of the preserve to create a place of change where fresh waters meet the salt water bay.

With a blend of temperate and tropical plant communities, a variety of wildlife can survive here including the endangered Florida panther. This is also one of the few areas that you can find both alligators and crocodiles sharing the same habitat. During the winter months, young gator hatchlings will feed on insects and small fish to sustain their lives. Only

twenty percent will make it to their fifth birthday.

Black bear in Florida do not hibernate for the winter like their northern relatives. Some revert to a pattern called “winter lethargy” or “denning,” whereby a reduction of activity takes place and the Big Cypress bears sleep less deeply than others, if at all.

More than 200 species of birds have been seen here and many are migratory from the now cold northern states while some are year round residents. One of the more unique birds is the wood stork. During the winter months, the Big Cypress area becomes more dry, and fish that were spread throughout the swamp are now concentrated in smaller, wet areas. This signals the mating season for the storks. Food will now be more abundant closer to the nesting area, which is mandatory for breeding pairs. Two adults and their young will consume more than 440 pounds of fish in a single breeding season.

Many wading birds such as snowy egrets, great blue herons, night herons and a variety of other species will be found in these water-concentrated areas as well. This also gives rise to sightings of red-shouldered hawks, bald eagles and even the American kestrel.

The area received its name from the many cypress trees that are found here.

Florida has more of these conifers than any other state in the union. During the early 1900s railroads were actually 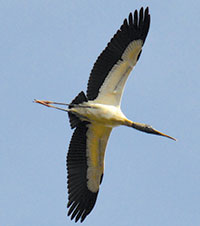 Wood stork flies over the 10,000 Island refuge area, close to Big Cypress and the Picayune Strand. PHOTOS BY BOB MCCONVILLE

built in the region to transport this lumber to market. The wood was used primarily for roof shingles and cisterns, which should indicate how durable the product was.

These are high rising canopy trees that provide shelter, habitat and food for a variety of wildlife. They are slow-growing and can live very long lives. Some Cypress in this area are estimated to be more than 400 years old. One in central Florida was estimated to be 3,500 years old before it was struck by lightning in 2012.

Big Cypress is truly a winter wonderland. You won’t find snow but, if you look carefully, a variety of magical surprises can leave you with lifelong memories!

Meaning this in the kindest way and, with no disrespect, I urge you to…GO TAKE A HIKE!

Bob is the owner of Stepping Stone Ecotours and is a naturalist for the Dolphin Survey Team on board the Dolphin Explorer. He will be speaking at Rose Auditorium in January, March, April and May on a variety of wildlife subjects. Bob loves his wife very much!!

Last year’s talk about wildlife in the Everglades was both fun and exciting and, with a live alligator present, patrons will learn hands-on all about these prehistoric creatures. MIHS Members and Marco Island Academy students are FREE. A $5 donation is requested
from all others.