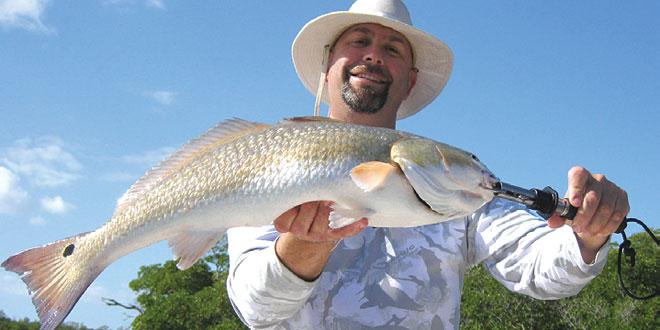 One species of fish that we catch all year round here in the 10,000 islands is Redfish. Its true name is Red Drum, however most in our area refer to them as Redfish or just “Reds.” Their Latin name is Sciaenops Ocellatus, and they are closely related to the Black Drum or the Pogonias Cromis.

They are classified as Drums because they make a deep drumming noise. Several times I have come upon large schools of Redfish that you could actually hear making a deep bass drumming noise in the water around the boat. It kind of sounds like that high school kid’s car stereo beating bass and drums at the traffic light next to you. In fact, the first time I heard it, I was looking around wondering who was out on the water blasting their stereo. Then I looked down into the water and it was solid copper in color from a school of literally hundreds of Redfish in the 20 lb range. It was amazing!

Since 2007, Redfish have been classified as a “Game Fish” which means they cannot be commercially caught in Federal waters. They are however a fantastic fish to eat and are 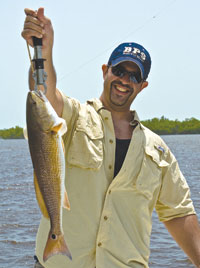 Mike and a Redfish.

targeted by local recreational fishermen as dinner. The younger Redfish in the slot size of 18” to 27” have a mild flaky flesh that is fantastic for eating. Once they get larger, the flesh becomes tough and considered undesirable for the table.

They can be found in both the Atlantic Ocean and Gulf of Mexico. Redfish do not mind cold water and can be caught in the near coastal waters everywhere from New England down around Florida and throughout the entire coastal areas of the Gulf of Mexico.

Redfish can range from a deep copper color to a pure silver color. They just about all have at least one spot on either side of their tail which is believed to imitate an eye and confuse predators as to which end to grab. Some fish have multiple spots. I have seen some with over a dozen. I have also caught several that did not have any spots at all. I do not know why some have more spots than others. Every time I ask one, they just give me a blank stare and never answer me. Rude huh? 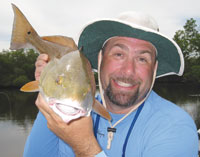 batch! They spawn in the late summer into the fall. They are aggressive eaters and experience their most rapid rate of growth during their first year, which puts them right around 13” at the age of 12 months. A 25” to 27” Redfish is thought to be four years old and of sexual maturity. They are thought to be able to live up to 60 years, and the largest redfish landed weighed just over 94 pounds and was caught off Hatteras Island in 1984.

Redfish can be caught in our area year round using various different methods. The most common is just fishing over oyster bars with a live shrimp on a hook. You can add to that by using a popping cork attached to 2’-3’ of 20-30lb leader. Many people use artificials including soft plastic shrimp, paddle tail baits, gold and silver metal spoons, live pilchards, thread herring, or cut bait like mullet or ladyfish. Which ever method you choose, hang on to that rod tight because a Redfish will aggressively inhale your bait and peel the line off your reel while making a fast run in an attempt to escape.

Need some lessons or want to come catch some nice Reds? Give us a call!