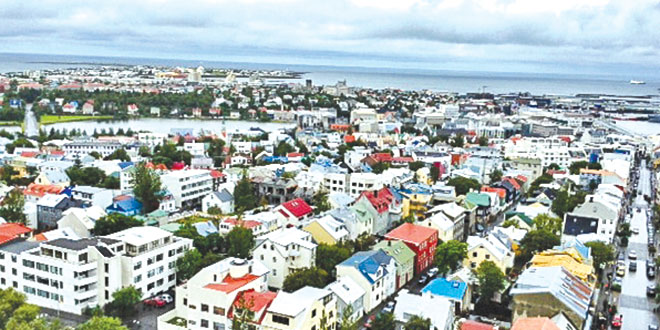 Rooftop view of Reykjavik from the Hallgrimskirkja church. PHOTOS BY WILMA SANDERS

Unless cruising, which is not our preferred method of travel, grappling with luggage can take some of the pleasure out of a journey. For domestic destinations, we usually use just two carry-ons and a back pack. We literally do carry on our luggage and deal with TSA restrictions by buying any large sizes of liquids or gels, such as toothpaste, when we arrive. For month-long treks to Europe, we bring one larger size suitcase, one carry-on size, which we check, and a backpack. The backpack contains our electronics, items we may want on the plane, medications and some “emergency” get-us-through-the-night items in the event that our luggage is delayed.

Friends of ours, Wilma and Harold Sanders, however, have the art of light packing down to a science. For a six-week trip to Europe last fall, they brought only two carry-ons and two backpacks. That is very good considering they spent one week in chilly Iceland, two weeks in hike-enticing Switzerland, two weeks along the temperate Amalfi coast and a week in chic Paris. They did check their carry-ons, thus avoiding the TSA liquid restrictions and because the collapsible walking sticks they used are not allowed in the cabin.

When they planned their trip, they knew they would have to travel light as they would be hauling suitcases on and off trains, and there is always concern about back injuries. Their luggage was two-wheeled and soft sided. Harold used a Travel Pro, while Wilma had a Rick Steves’ bag with no metal in the lid which made it quite lightweight. Their bags were expandable, and they did expand them for the trip home. They used luggage straps to help identify their bags and as precaution should the zippers break in transit. Their backpacks, which went on the plane with them, contained all their valuables, as well as comfort items for the long plane ride. They did bring along an additional small, foldable bag should they buy anything they might want to bring home.

Wilma and Harold have discovered the pleasure and convenience of staying in apartments in Europe. In prior columns, I’ve written about the joy of short-term apartment rentals; it is our preferred mode of accommodation. When booking their apartments, laundry facilities were important for these lightweight travelers. While they couldn’t always find apartments with dryers, all of them had washing machines — some better than others. We’ve stayed in the same apartment they were in Switzerland, and I can attest to the modern, electronic washer and dryer available to them there. The machines had a profusion of programming buttons and options; I’m still not sure I figured it out totally, but our clothes came out clean and dried quickly.

They felt that with laundry facilities two pairs of pants and four tops along with what they wore on the plane were sufficient.nThey prefer Travelsmith-type clothing or synthetic knits that can roll up to minimal size. One of Wilma’s soft, packable outfits was a little dressier, made even more so with some jewelry. Bringing layers was key in dealing with the various climates they encountered on their trip. The layers included nylon shells and cardigan sweaters. The button front facilitated adapting to cooler or warmer temperatures. Wilma’s shoes were a pair of sandals 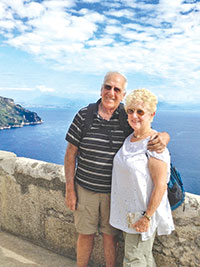 Wilma and Harold with their backpacks in Ravello,along the Amalfi Coast, Italy.

and black sneakers. Wilma felt that their luggage contained more “gadgets” and “junk” to make their lives more comfortable than clothing.

Gadgets included an iPad, iPad Mini, two iPhones, an extension cord and a blue tooth keyboard. The keyboard was useful as Wilma blogged daily. Internet/WIFI is another criteria for them when booking an apartment. Wilma used her iPad Mini for taking photographs, but on her next trip, might bring her Canon Elph which, of course, is small.

There was nothing that they wished they had brought with them, although they did go out and buy an extra plug adaptor for all those gadgets. Next time, though, they may bring those special coffee filters for individual cups of coffee rather than always using the coffee maker in their apartments. Wilma did buy a lightweight top in Amalfi (The clothes are so beautiful there. How could she resist?), and felt she could have used one more layer when they were in Iceland. They tried to limit gifts they bought to lightweight articles such as scarves. They also purchased bar soap and tissues for each apartment in which they stayed.

Plastic bags were essential for organizing as well as extra ones for storing things in their apartments. All liquids were placed in plastic bags. A gallon-size zip lock bag was used for small amounts of emergency “what ifs,” such as first aid kit, cold remedies and other medications for possible illnesses to which they are susceptible rather than trying to find suitable substitutes in European pharmacies. Another gallon-size bag stored personal items. A quart-size zip lock bag was used to organize all items needed for morning rituals and another one for the evening.

Although it is advisable to keep medications in their original containers, Wilma and Harold did not. Rather, they put all their daily meds in a plastic bag, identifying the pills with a slip of paper, and brought one pill box which Wilma filled weekly. I must admit that I also tend to not keep my medication/vitamins in original containers, but rather pack them in very small (2” x 2”) individual zip lock bags, one for each day. It bears repeating that this is not advisable. We are planning a trip to Istanbul later this year; all my pills will be in original containers. Legitimate or not, visions of the 1970s film, “Midnight Express,” still haunt me.

Wilma does not use packing cubes or space bags; space bags being something that are essential for my packing and maximizing capacity. She has discovered something else, though, that I also find to be most helpful when traveling. She brings along an over-the-door shoe bag with transparent pockets to store toiletry items once they get to their apartments. I’ve been using mesh over-the door shoe bags for years whether we stay in a hotel or apartment. They keep toiletries quickly at hand while reducing clutter on what is often limited bathroom shelf space.

To help organize themselves, they maintain a packing list which is updated before and after each trip. I do the same thing, except I keep a couple of different lists, depending on the climate of and activities offered at our destination(s).

Wilma and Harold are already planning their next extended European adventure; Wilma claims they will be packing even less clothing!