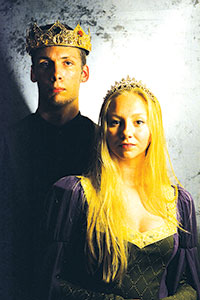 Macbeth—celebrated, battle-worn, and a seemingly loyal subject to the crown of King Duncan— encounters witches wandering through the wood upon his return from war. Promising him glory and kingdom, these shadows set him down a path of darkness and self-destruction as he puts his faith in forces that forswear, and forsake him at every turn. Encouraged by his power-hungry wife, Macbeth takes all that he deserves until he has nothing left but a kingdom which seeks to ruin him with revenge.

Paving the road to Macbeth’s ruin has been a year-long endeavor for the program’s director, Kaitlynn McRae, and the Academy cast. In the summer of 2014, McRae travelled to Cawdor Castle in Inverness, Scotland, as well as the Globe Theatre and Tower of London, to conduct research for the show. “What most people don’t realize,” she says, “is that this play was performed during a time of reformation for what we now call Britain, both politically and religiously.” Written during the time of the infamous Gunpowder Plot, where Catholic rebels attempted to attack the protestant English parliament led by the Scotland-grown King James I, the turbulent relationship of Macbeth and Lady Macbeth may well be a metaphor for the instability facing the evolving nation. Central to the drama program’s historical and literature components, McRae led the students through the history of the Gunpowder Plot, and the oftentimes rocky relationship between Scotland and England, to better understand and appreciate the context of Shakespeare’s story in a month-long intensive table reading and study of the play.

“Of course, the witches are the most iconic component of the play,” says McRae, and the Festival has teamed up with Naples-based dance studio, Dance Arts by Maria, for the more bewitching scenes. “The witches are the shadows of action, so incorporating the fluidity of dance into the play brings those shadows to life.” The witches are played by Julia Hajjar, Paige Babb, and Ella Pflaumer, and are choreographed by Maria Ellis Nave. “We don’t want the witches to be dismissed as otherworldly magical beings, prodding the story along because they are bored and evil; we want them to be intertwined with the world, representative of the darkness within Macbeth and Lady Macbeth themselves.”

The lead characters are played by Dylan Rogers and Jessica Lang, both Festival veterans. McRae, having played Lady Macbeth in 2006, is determined to highlight the complexity of the characters, and believes the relationship between Macbeth and Lady Macbeth is the real invisible dagger. “They’re not evil, they’re just tragically human,” she says. The students agree. “Macbeth would do anything for his wife, and she’d do anything to make his power hers,” Rogers explains. “Really, they both just want to be loved, but that’s the one thing they can’t figure out how to do.”

The Festival and Academy will perform Macbeth at the Marco Players Theatre on May 22, 23, and 30 at 7pm, and May 24 and 31 at 2pm. Tickets are $18 for adults and $10 for students, available at (239) 542- 7270 or TheMarcoPlayers.com. *The Festival’s proceeds from the show will go to the Festival’s summer playwright’s workshop and the Academy’s autumn production of O. Henry’s The Gift of the Magi.