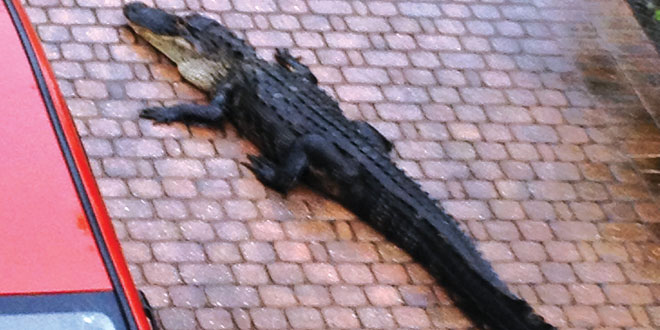 As I have been a resident of Southwest Florida’s Jurassic Park (a.k.a. Fiddler’s Creek) only since late 2009, I am often asked if I miss my Northern Virginia home.

The answer comes down to a discussion of the benefits of “wildlife” vs. “wild life.”

For example, up north, whenever Sylvie, our neighbor on Wild Ginger Terrace, would have her lady friends over for a nightcap – or ten – the event was typically referred to as “Girls Gone Wild Ginger.”

Without a doubt, nothing was better than a spirited evening at the home of our neighbors, the Boosers.

Yes, you read that last name right: Booser. No further explanation is needed.

And our beloved Dr. Faith would come running every time a Wild Ginger medical emergency occurred.

With this group of “wild life” enthusiasts, she was pretty busy too.

However, when it came to animal wildlife, the wildest creature lurking about on Wild Ginger Terrace was—well—me.

Here in Jurassic Park, that is not the case—much to my amusement.

We were here less than a week before my Short Daddy found himself swimming ten feet away from a manatee before briskly fleeing the Gulf of Mexico with the theme from “Jaws” symbolically thumping in his head.

Though he later attempted to defend his actions—“‘Manatee sounds way too much like ‘man eating’”—all the drama was basically over a “sea cow.”

However, our Florida wildlife encounters seemed to escalate from there:

Snakes in the garage — check.

And my personal favorite, a pint-sized lizard in the foyer. 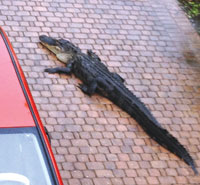 Wildlife in Fiddler’s Creek: exciting for Tony, terrifying for his dads. PHOTO BY RANDALL KENNETH JONES

sporting a “cone of shame” + a Hoover vacuum with attachment = chaos.

My apologies to GEICO—things did not work out well for the gecko.

In fact, these alarming creature encounters have so unnerved my Short Daddy that he has Jungle Jack Hanna’s cell phone number on speed dial.

That’s not a joke—he really does.

However, just as soon as I thought it couldn’t get any better, an alligator took up residence in our driveway.

First, should I have had to explain to my humans that—hungry or not—this was a highly inappropriate time to order pizza delivery?

Second, despite the mad scramble on Google for “alligator nuisance phone,” did my humans really think he was going to start nibbling on a Hyundai?

Perhaps a Jaguar or Mercedes—but a Hyundai? Even a gator has standards, people.

At least I took the high road and resisted the urge to offer up homemade Chihuahua sliders as a mid-afternoon snack.

Nevertheless, this was clearly an issue that was not going to be solved by a Google search or a Hoover vacuum cleaner.

Of course, amidst the bedlam, Mr. Gator quietly returned to whence he came—having no knowledge of the better-than-Animal-Planet joy he brought to my otherwise boring day of eat, sleep, poop, repeat.

So, do I miss the “wild life” of the North? Of course I do. Those folks knew how to have a good time.

To the assorted Plummers and Butterfields, Dr. Faith and PJ, the Yellows, the Pods, the Bellinis, lots of Lisas, the Muffins, the Boosers and everyone at the Lansdowne HOA—we love you.

However, it must be said, my old fuddy-duddy humans could use a little Booser boost—even the alligators don’t find them interesting enough to stick around for long.