Why Has Pickleball Become So Popular? 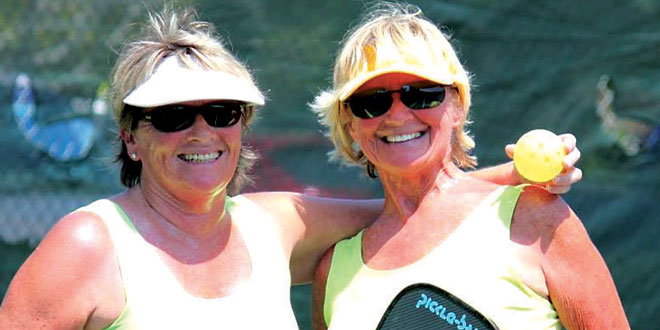 Three years ago, when pickleball was first introduced to the Racquet Center, not many people, including myself, knew much about the game. But pickleball is now the fastest growing sport in the country! Pickleball has become a very popular athletic activity across the nation, and its popularity is spreading around the world.

Believe it or not, the sport of pickleball has actually been around for 50 years. The game was invented in 1965 in Seattle, by two dads who had returned from a round of golf and were in search of an activity that they could do with their kids for fun. The game was originally set up on a badminton court, and got its silly name from the family dog whose name was Pickles. Pickles would chase and fetch the balls, hence the name pickleball.

Along with many others, when I was first introduced to pickleball, I did not take the sport too seriously. But as I became more involved, I realized that it is a very competitive game that is fun to play and provides a great aerobic workout at the same time. 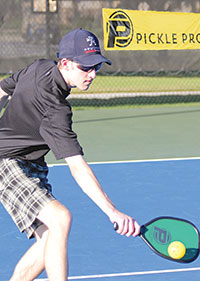 as doubles. Games are played utilizing ping-pong scoring to 11 points. The average game takes about 20 minutes. The team that wins the game retains ownership of the court, and two new players rotate in for the next game. These two new players switch partners with the team that has held the court as the previous winning team. This format provides a social mixer type of scenario, in which in an hour-and-a-half time, we have all played four or five games with a dozen different people.

In addition to this, as an instructor I have found that the learning curve for beginners to become proficient in the sport of pickleball is much easier then in tennis. It is also an alternative for many baby boomer tennis players, who because of physical conditions such as knees, hips, shoulders, etc. (aka the limitations of our maturity), just simply can no longer play the sport of tennis. Because pickleball is played on a court that is one-half the size of a tennis court and is played with a lightweight plastic ball and a lightweight paddle, even though the sport is on a hardcourt surface, players do not have the issues they have with tennis.

Also, as originally intended, pickleball is a great family activity. Over the last three years, as I have been instructing pickleball at the Racquet Center, I have had several tennis playing members come to me wanting to take a pickleball clinic with their grandkids. After taking the clinic, they come back to me a few days later, and tell me, 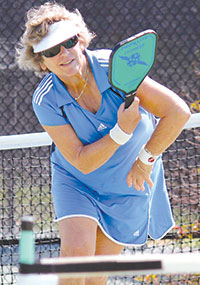 pickleball is the only activity that they have found that they can all do together, that everyone is good at, and most importantly, everyone has a great time together!

Like tennis, pickleball has a rating system ranging from 1.0 to 5.0, with a 1.0 player considered to be a complete beginner, up to a 5.0 being a top rank tournament level player. This is a self-rated system, and the qualifications of these ratings can be found on the USAPA website, www.usapa.org., as well as being posted at the Marco Island Racquet Center. As with tennis here on Marco, the majority of players are in the 3.0 to 3.5 level of ability.

In future articles, I will be addressing the sport of pickleball and its strategies, for beginner, intermediate and advance levels of play. But for now my advice is: Don’t miss out on all the fun! Get in the game! Make new friends! Give pickleball a try!

The Racquet Center offers daily clinics for all levels of pickleball. We also have daily rotational play weekday mornings from 8 to 10 AM.

Wayne Clark is a certified professional tennis instructor with over 23 years experience coaching players on all levels of the game. Wayne is also qualified in pickleball instruction. He has been the head instructor at The Marco Island Racquet Center since 2001. The Racquet Center offers clinics, private and group lessons for both tennis and pickleball. Coach Wayne’s Island Kids Tennis juniors program runs year round and has classes for players from kindergarten through high school. Contact Coach Wayne by email at WClark@cityofmarcoisland.com, by phone or text at 239-450-6161, or visit his website at marco-island-tennis.com