WHO’S YOUR MAMA? Dolphin Birthing Season is Near! 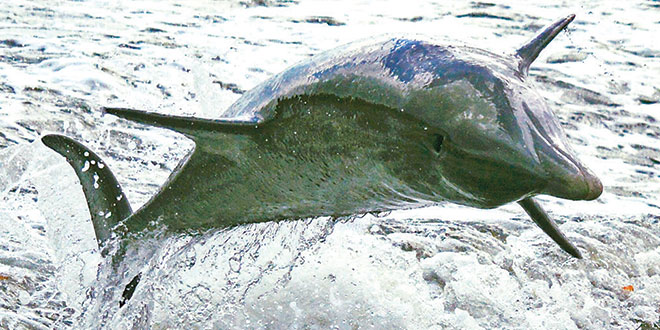 In this photo taken May 24, adult female Nibbles lookslarger than usual and is a candidate to give birth this fall.

Giza, Nibbles, Rangle and Button. Ah, yes! These are some of my favorite girls. But wait…these are not girls’ names! They are, if we’re talking about dolphins.

It’s that time of year, when the Dolphin Explorer’s survey team is noticing changes in behavior of some of the adult female bottlenose dolphins in the Marco Island area. Many of the 3 and 4 year old calves will be leaving their moms this fall for one main reason…mom is having a new baby.

Birthing season is quickly approaching for our area. It will vary around the world, based on climate and habitat, among other reasons. For example, in Australia, dolphin births take place mainly in June and July. Near Melbourne, Florida, the peak calving seasons are April and August. Here in the Marco Island waters, the babies are born primarily in the fall months of October and November. 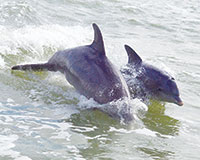 Babies stay with mom until they are 3-4 years old. Since the gestation period is 1 year long, mom can become pregnant when her young one turns 2. PHOTOS BY BOB MCCONVILLE

little one is two years old.

As mammals, and beginning life with no teeth, the baby will nurse exclusively from mother’s milk for the first six to eight months. When the teeth start to emerge mom will teach the calf to fish, but it will continue to nurse for 18 to 24 months. When the baby is no longer feeding from the mother, she is ready and able to become pregnant again.

Now that the science is done, let’s meet some of our prospective moms for this fall and learn their stories.

GIZA…literally, this girl is a baby factory, giving birth in 2006, 2009 and 2012, with all three calves surviving to juvenile status. Her youngest, and still by her side, is Sammy. The independent behavior displayed by Sammy indicates that Giza may be giving birth again this fall.

NIBBLES…now here is an interesting mom. She gave birth to Jayson in 2007, and the two were seen most often in the area of the Jolley Bridge. In 2012 she gave birth to Coco. For some reason, not too long after Coco was born, both mom and baby moved to an area closer to Rookery Bay and Keewaydin Island, but Jayson stayed in the bridge area. Within 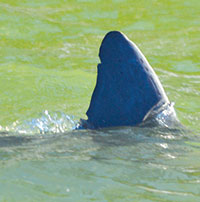 The markings on the dorsal fin indicate that this is adult female Rangle. Her little one, Bubbles, turns 3 years old this fall, making mom a candidate for a new baby.

the last few months Nibbles and Coco are back by the Jolley Bridge. Is this her birthing area? We will know for sure in the next few months!

RANGLE…the most fascinating story of all! When the survey team first met her in 2006 she already had a calf with her, named Ripple. She gave birth to Mocha in 2009, and to Bubbles in 2012. Here is her miracle- in early 2012 we noticed a severe gash on Rangle’s head, very close to her breathing path, the blowhole. After sending photos to several agencies to see if a rescue of mom and baby should take place, it was determined that the injury should be left in the hands of Mother Nature and, if Rangle expired, a capture of Mocha would take place. Rangle not only completely healed and continued to raise Mocha, she was pregnant with Bubbles at the same time! Amazing! Let’s see if mom delivers a newborn again this fall.

RAKES…this female gave birth to her first calf in 2012, but not without a story. She was always seen in the company of other adult females prior to 2012 and, in fact, was nicknamed “The Babysitter.” It was thought by some that she 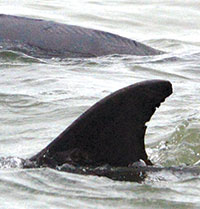 The marks on this female’s fin tell our survey team that this is Orange. Now an adult, she has been seen constantly with other moms and their calves, making her a potentialmother candidate for the fall.

might not be able to mother a calf of her own, but she fooled those sceptics. She was learning life’s lessons from the other moms in order to finally bring Scamp into the dolphin world. Way to go, Rakes!

ORANGE…born in 2004, this girl has not given birth to date. However, similar to Rakes, she is always seen in the company of other moms and babies. Is she also learning from other females how to raise a little one?

There are several other candidates on our list that could give birth this fall. Tess and Sparkle are constantly in the company of large males (potential suitors?) while Button, Victoria, Batman (yes, Batman is a female), Cosmo and a few more could potentially produce a new baby.

In the fall of the last four years we are averaging six baby dolphins per season in our primary survey area of the Marco River and about eight miles north. It will be interesting to see our 2015 moms and calves in just a few months!

Bob is a Naturalist onboard The Dolphin Explorer and owner of Stepping Stone Ecotours. He is a graduate of Leadership Marco 2014 and a member of the Florida Society for Ethical Ecotourism. Bob loves his wife very much!

Wild Florida Ecotours Is Open for Adventure!Gators Among Us