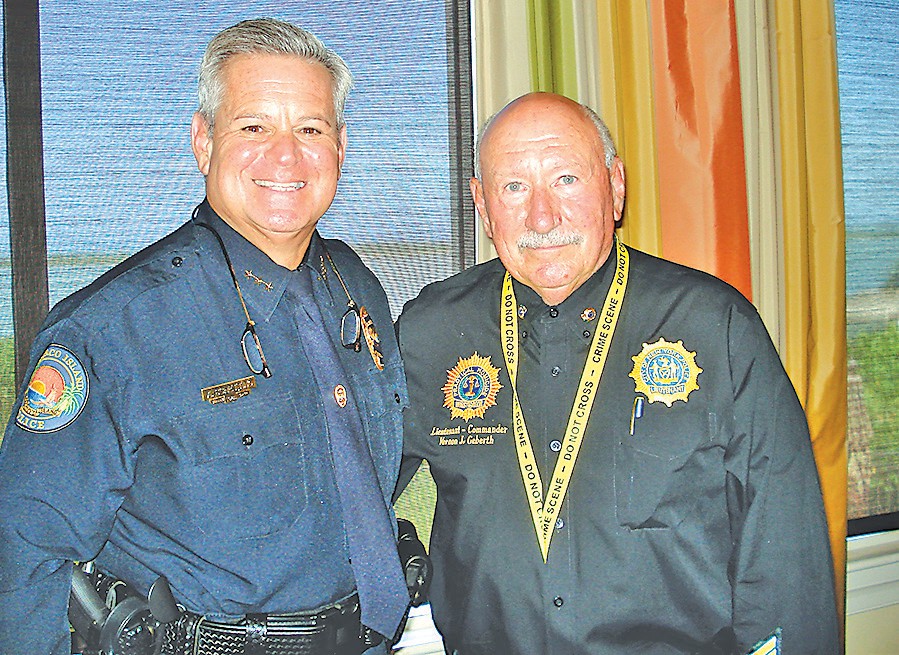 Practical application of the analysis technology of deoxyribonucleic acid, better known as DNA, has offered the greatest advance in criminal investigations since fingerprinting. An expert in this field, Retired Lieutenant-Commander of the New York City Police Department, Vernon J. Geberth, recently addressed the Marco Island Police Foundation on this topic. Marco Island resident Geberth is a nationally renowned lecturer, author, educator, consultant and expert witness on death and homicide investigations with more than 40 years of experience in law enforcement. Upon his retirement, Lieutenant-Commander Geberth was the Commanding Officer of the Bronx Homicide Task Force, a division that handled over 400 homicide investigations each year.

What exactly is DNA and how is it used in solving crimes? In the words of Lieutenant Commander Geberth “The proper collection and analysis of DNA can convict the guilty and exonerate the innocent.” DNA retrieved from a victim or crime scene provides biological evidence at its most fundamental level – the molecule. DNA can be retrieved from any biological sample – blood, body fluids, hair, and even skin cells of which humans naturally shed tens of thousands each day.

DNA profiling can be used to establish a probative link between crime scene evidence and the possible offender’s DNA. The first criminal investigation using DNA science took place in England in 1986, It was conducted by geneticist Dr. Alec Jeffreys. Authorities were holding suspect Richard Buckland in custody after he confessed to the crimes. However, when police asked Dr. Jeffreys to forensically link Buckland to the crime, the DNA tests exonerated the suspect. A genetic dragnet was then conducted, collecting blood samples from more than 4000 male inhabitants of the crime area. The investigation revealed that a man named Colin Pitchfork had asked a friend to submit a substitute blood sample for him. Once this tip was revealed and an authentic blood sample was obtained, police were able to link Pitchfork to the serial crimes. In 1987, Colin Pitchfork became the first person in the world to be identified, captured, and successfully prosecuted as a result of DNA analysis.

In America, the first case of DNA profiling took place in Orange County, Florida as part of a rape investigation. Tommy Lee Andrews was convicted of rape when DNA from a blood sample matched the DNA of semen found inside the rape victim.

Geberth told of the first application of DNA technology in New York State, a case that he personally supervised. People v. Castro was the third case of DNA technology in the United States and the first case where the admissibility of DNA profiling was challenged. The gruesome stabbing murder of Vilma Ponce, who was eight months pregnant, and her two-year-old daughter presented massive amounts of crime scene blood, including bloody footprints throughout the apartment. However, a single drop of blood found near the front door suggested that the offender may have cut himself as well. Geberth decided to have that blood evidence analyzed at a private lab using a technique that was new at the time. The DNA print identification test led to the development of a viable suspect who had a fresh cut on his hand and dried blood on his watch. This first generation DNA technology positively identified Joseph Castro as the killer. However, attorney Barry Scheck, who at the time represented the Public Defender’s office, challenged the science of DNA. Castro was found guilty, as DNA technology was proven to be accurate in spite of efforts to discredit the science. The challenges of this case did however raise awareness of inefficiencies in the technology of DNA evidence interpretation at that time. Those problems have since been corrected and rectified.

Efforts to undermine DNA technology in homicide cases continued into the 1990s. Think back to the O.J. Simpson trial in 1994, when O.J.’s DNA was positively linked to the murders of Nicole Brown Simpson and Ron Goldman. Two different DNA analysis technologies indicated that there were 999,999 chances in one million that DNA retrieved from the scene matched that of a blood sample from O.J. However, the defense lawyers contended that the blood sampling collection and analysis were careless and thus the DNA tests could not be used as valid evidence. One positive result from the O.J. Simpson case was that DNA laboratories were then made to be more proficient and now must be accredited in order for the evidence to be used in court.

Fast forward to today’s world and DNA technology has become truly amazing. DNA obtained from a crime scene can now be used to provide a Parabon Snapshot DNA Phenotyping, providing kinship information that can determine the familial relationship between two individuals, even if they are only distantly related. Even a person’s ancestry can be determined on a global level. Advanced computer software can examine even low-level, degraded, touch (skin cell) and mixed DNA samples.

DNA analysis is ever-changing and improving. What once was a tedious complicated process, taking weeks or months for even a single procedure, can now be completed in a few days. In the future, the fusion of DNA analysis and microchip technologies will further revolutionize the science of forensics.

Lieutenant-Commander Geberth is extremely optimistic of progress in the field of homicide investigation. He continues to stand by his most basic commitment, a dedication to humanity. In his words of advice to those in law enforcement, he states with steadfast conviction, “Death investigation constitutes a heavy responsibility, and as such, let no person deter you from the truth and your own personal commitment to see that justice is done – not only for the deceased, but for the surviving family as well. And remember: We work for God.”