Who wants to be displaced? I have a solution! 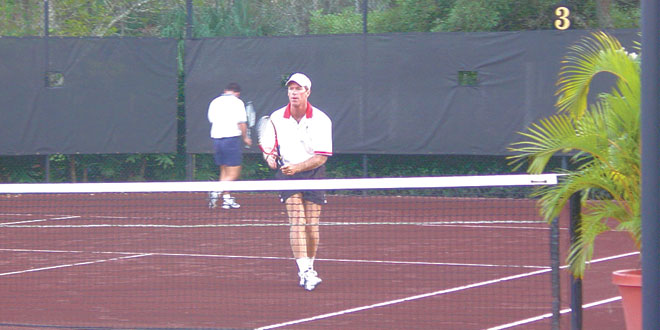 Do you remember when December used to be a great month as we were so excited for the holiday season? Now, December has a whole new meaning for thousands of USTA tennis players – – Did my rating change?

To a certain degree, improving tennis players are excited to see their ranking or ratings improve; it’s exciting to move from 2.5 to 3.0 or 3.0 up to 3.5. However, if one moves up from 3.5 to 4.0 it can be a lonely place. Most of the tennis population plays at the 2.5 – 3.5 levels and when one climbs to the 4.0 or 4.5 levels, there are fewer players to practice or compete against. As I heard last week from a Naples player, “I’m a man without a country.”

First and perhaps most important, why are we in this rating’s mess? To me, it is easy to explain. The ratings are all wrong! It starts at the 2.5 level. Few, if any tennis players wish to play at this particular level. Sure, it is easy to understand because it is basically the bottom of the totem pole. If we could keep more players at the 2.5 level, we would be able to produce more accurate ratings.

We could achieve this by having a solid group of local rating verifiers. Their first assignment: Don’t be afraid or intimidated to rate players at the 2.5 level. Believe it not, we had this system in place in Collier County for at least ten years and our ratings were dead-on! Yes, occasionally there was an error but we were able to correct it with our local tennis leaders. If we could harness the ratings and make them more accurate, the game would be drastically improved.

Here are some ramifications when the ratings are inaccurate: Local players get crushed at the Sectional Tournament or State Tournament in Daytona. Players who are moved up to the 4.0 level are displaced or find themselves without a team to join. Players have far fewer players to practice with at their club or local area. Finally, no one really understands what their level is unless they play state level or national level USTA tournaments. The key to understanding one’s true level is to use a player as a baseline measurement.

Let’s profile Warren Eber who is rated 4.5. Not 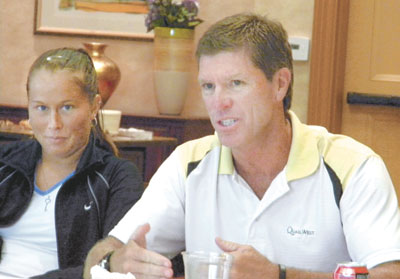 only was Eber a star junior player from San Diego but he was also an All- American at the University of Arizona. After college and pro career, he continued to register big wins on the adult USTA circuit. Possessed with a huge lefty first serve and forehand drive, he has been a dominant player his entire life. Now at age 50 something (had to protect my friend) the USTA intelligently put him at this new level; most 5.0 players are in their 20’s or 30’s. Therefore, a realistic 4.0 player is someone who can win USTA events anywhere in the country. This high-level 4.0 player can compete (as the professional) in local pro-am tournaments and do well. Additionally, this talented player can easily serve and volley during tough doubles competition and win their serves often.

If we follow this blueprint, the 3.5 player is on the precipice of being an all-around tennis competitor but narrowly misses the mark of the 4.0 level. Our 3.5 player returns serve well, moves into the net and is tenacious. What is the missing ingredient? Most 3.5 players do not have a dominant serve or possess a reliable put-away stroke. Make no mistake – Our 3.5 is one tough hombre. As we delve into the 3.0 level, we continue to observe excellent tennis skills but no one has a strong serve. Our player returns well and often has keen strategy with outstanding lobbing and short angle strokes. The bottom line is the 3.0 competitor is a skilled tennis player but does not have many ‘killer shots.’

As it is presently constituted, far too many wonderful people are freaking out every time the ratings come out and I think this is ridiculous. Hey, we used to have the almost perfect system (I think we agree nothing is perfect) and if we were to return to the glory days, we would solve this pesky problem. I urge all of the local tennis leaders to implement this new/old system so we can avoid the December blues Please let me know what you think of this idea.