Who Owns the ATON? 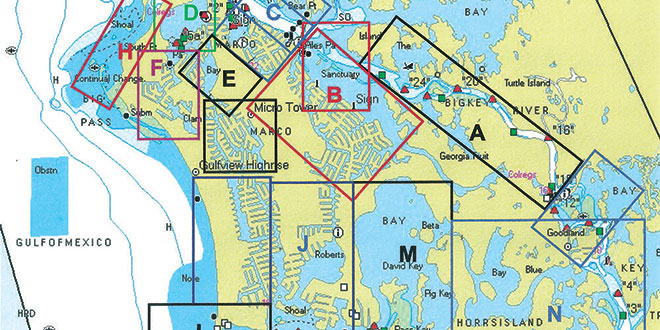 Let me start by defining an ATON, which is an aid to navigation. ATONs can be buoys, beacons and lateral aids to navigation (the red even-numbered triangles and the green odd-numbered squares). These ATONs define the safe channels for navigation in and around our Marco Island waterways. ATONs are the responsibility of the United States Coast Guard. Technically, all non-United States Coast Guard ATON’s are called Private ATONs (PATONS).

Other signs in the water that alert boaters to a Manatee Zone, No Wake, etc. are PATONs. PATONs have been put up by the county and the city to help along the shoreline to control boat speed and protect the wildlife, shore/seawall erosion, and help to eliminate boater accidents. For convenience, for the remainder of this article I will use “ATON” to represent any aid to navigation.

But who actually owns the ATONs and is responsible for their maintenance and/or replacement over time has not been an easy question to answer. The United States Coast Guard’s ATON ownership has not been the issue. But Marco Island and Collier County have been trying to resolve their respective responsibilities for the last year. The problem goes way back, before Marco Island became a city and the county was responsible for all ATONs. Over the years Collier County has given responsibility 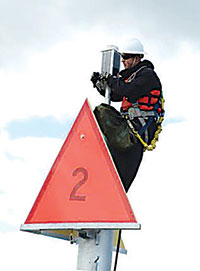 There are 99 ATONs inMarco’s waterways, some in need of repair. SUBMITTED PHOTO

of some ATONs to the city. No one could find all of the paperwork, so the task of identification was started again.

The question has been answered. The Marco Island Waterways Advisory Committee announced at the meeting on February 18, 2016, that a list of ATONs has been developed that indicates the ownership of each of the 99 identified ATONs around Marco Island. Basically, all ATONs in Collier Creek, Collier Bay and Smokehouse Bay are the responsibility of the City of Marco Island. All other ATONs around the city, not owned by the USCG, are the responsibility of Collier County. Factory Bay ATONs are the exception. Owned by the county, they will be maintained by the city.

The City of Marco Island has not had any budget to repair ATONs for over five years. That has changed as of two months ago, when City Manager Roger Hernstadt attended the Waterways Advisory Committee meeting and declared that this was a grievous oversight and the city will commence to repair ATONs immediately.

The Marco Island Sail and Power Squadron (Power Squadron), as a part of their mission for boating safety, has been working closely with the Marco Island Waterways Advisory Committee and its Chairman James Timmerman, to report the status of ATONs in desperate need of repair. Past Commander Carl

Thieme, chairman of the squadron’s COOP Charting Committee, has been working with 12 squadron members to actively survey all 99 ATONs in the waterways around Marco Island. To better communicate with the committee, 14 waterway zones (A-N) have been identified to quickly group and locate ATONs.

The survey’s data, recorded in an EXCEL database for ATONs (and PATONs) includes the ATON type and identification number, zone, GPS coordinates, date of survey, and the ATON’s condition, including photographs. Past Power Squadron Commander Carl Thieme, and in his absence, Andrea Battaglia, have updated the Waterways Advisory Committee on the survey findings and progress each month.

All Power Squadron survey results are reported to the United States Coast Guard and the National Oceanic and Atmospheric Administration (NOAA). The Power Squadron has offered to report to the Waterways Advisory Committee any city-owned ATONs they find in need of repair. Citizens of Marco Island are encouraged to call the City of Marco Island at 239-389-5050 if they see any ATON in need of repair.