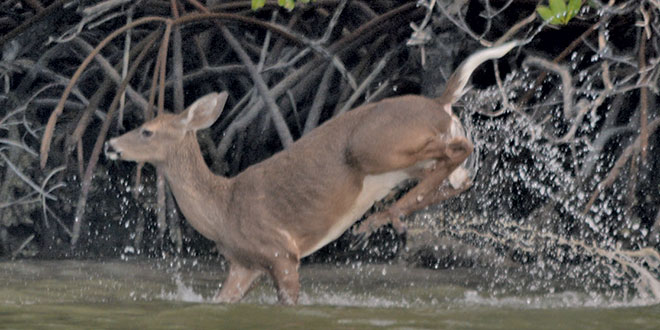 You are on a boat and in the distance you notice something swimming across the bay. It could very well be a pelican just relaxing on the surface or maybe a dolphin coming up for air.

But the silhouette against the sun is unique. You grab your binoculars, filled with curiosity about what is there. As you focus on the animal you realize that you are seeing something rare, something never seen by most visitors to our area. A white-tailed deer is swimming from one island to another!

It would not be a surprise for many folks if they came across a deer in a wooded area or open field. But traversing the waters from one mangrove island to the next? That’s a special sight!

White-tailed deer are common throughout the State of Florida. In our area they can be found in many of the wooded habitats between here and the interstate. They also take advantage of foliage in the Big Cypress Swamp and Everglades regions. Just up the road is Rookery Bay Reserve and they are found there as well. Some of the barrier islands will also be home to them.

On average, adult males throughout the state weigh about 125 pounds and stand 36 inches tall at the shoulder. Females are slightly smaller at 95 pounds and 32 inches, on average. These deer are smaller than those found in other states. There can also be a variation in the size of these deer within Florida’s varied habitats.

They have adapted quite well to the climate and environment here. The smaller body size benefits them in warm weather because it allows for less energy to be expended, which means they can regulate their body temperature better. Their smaller stature may also enhance survival in habitats where fertile soil may be low.

The name refers to the deer’s tail. It could be black or brown above, but white below. When alarmed the tails are held erect and waved back and forth, a warning signal of potential danger to alert other deer. Once in a while a white tailed deer will stomp its foot and snort, a signal that it is nervous about something in the area.

This species is most active at dusk and dawn. Their primary sources of food are fresh grass shoots, flowers, leaves and the fruits of several trees. Regarding fresh shoots, and before man was prevalent in this area, lightning strikes would burn the underbrush. As the fires subsided new shoots would rise from the ground, attracting the deer to the area. Presently controlled burns duplicate what nature did in the past. This sometimes helps to maintain the deer population within a specific region. The burns serve as a management tool for many animal and

PHOTOS BY BOB MCCONVILLESwimming from one island to another, this white-tailed deer quickly disappears into the mangrove trees

Fire can also act as a catalyst that releases nutrients from organic matter on the ground. These nutrients now become available for plants to utilize, which enhances the plant taste, digestibility and nutritional value for the deer and other area animals.

There is a lot of research underway regarding this species. The Florida Fish and Wildlife Conservation Commission (FWC) recently released their 2015 4th quarter findings. During that quarter 10 mortality events were investigated. Six of these deaths were caused by panther, one by alligator, one by bear, and the remaining two were not conclusive as to the type of predator, so they are categorized as “unknown.”

GPS collar data is also compiled from deer that were captured and released back into the wild. This helps to identify activity patterns and the relationship to water availability, recent burn sites (fresh shoots), and also helps to determine what predators are in those tracked areas.

On my many visits to Keewaydin Island it has been common to see deer tracks along the foliage line that meets the beach. Bobcats and panther have been sighted in this same vicinity. There is a white-tailed deer population on that island and several have been seen swimming in the Intercoastal Waterway near Keewaydin. A balance seems to be in place here.

The tracks on the area islands are most prevalent during dawn and dusk, when the deer are most active. Like humans the deer have rods and cones in their eyes that primarily detect movement and also enhance their ability to see in low level light, attributing to the dawn/dusk activity. Unlike humans these deer are believed to be color-blind and they detect objects in a series of gray shades.

Regarding food consumption the adults will eat about three to four pounds of foliage, fruits and grains each day, which equates to about 3% of their body weight. They process their food through four connected stomachs (65 feet of intestines). As their favorite foods become less available in certain areas their diets shift to less nutritious products which can have a negative effect on the reproductive process.

If you are on the water and in the distance you notice something swimming, grab those binoculars! It might not be a pelican or dolphin. It just might be a white-tailed deer!

Bob is the owner of Steppingstone Ecotours and a naturalist on board the dolphin survey boat, Dolphin Explorer. He is a member of the Society for Ethical Ecotourism (Florida SEE). Bob loves his wife very much!