“Which Came First, The House or The Job?” 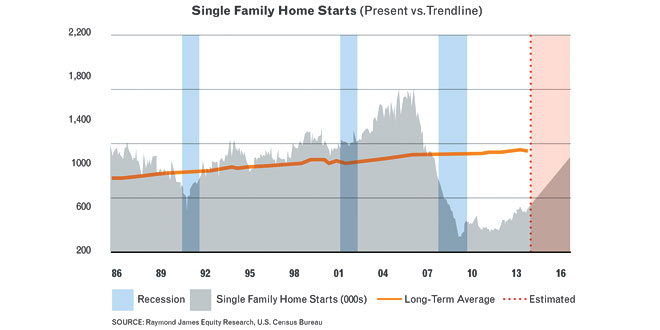 “Success isn’t a result of spontaneous combustion. You must set yourself on fire.” Arnold H. Glasow, American Humorist, 1905-1998.

Question: Why is the housing market so important to the economy?

Answer: As one of the top five leading economic indicators, new housing activity is essential to the strength of our economy in several ways: 1) actual investment in private residential construction, 2) increased consumption spending on housing related expenditures and 3) higher employment levels.

The formation of new households creates an economic trickle-down effect. For example, think back to your first apartment or home. During the pre-IKEA days, most of us received furniture and other hand-me-downs from Mom and Dad. When our girls moved into their first apartments, we gladly donated various pre-loved possessions to their cause. These events became opportunities to update some of our own furnishings, linens and kitchen utensils. The shopping provides economic stimulus.

Establishing new households not only triggers the purchase of tangible goods, another outcome is the additional use of consumer services such as electricity, water, sewer and cable. The combined result leads to increased economic activity and jobs. However, to establish a new household, there must be a source of income, which depends on jobs, or for retirees, the use of savings and investment income.

So what comes first: jobs or houses? The historic average for housing starts per year is 900,000 to 1 million units. As seen in the U.S. Census Bureau graph, beginning in 2006 the trend reversed, and has remained far below that number although interest rates remain at historic lows, keeping financing costs and mortgage payments affordable to those with jobs.

During the Great Recession, half of the 8.7 million jobs lost were construction or construction related. Confidence was lacking, employment numbers were anemic, and housing construction came to a screeching halt. These jobs are coming back, but there is still a long way to go. We are in the early stages of what could be a long recovery cycle.

Sustained economic growth depends on job creation. During December 2013, the “official” unemployment number fell to 6.7 percent largely in part because more than 500,000 people gave up looking for work. The U6 Unemployment Rate is a broader measure of employment activity. The U6 rate includes “marginally attached workers and those working part-time for economic reasons” in addition to those people without work seeking full-time employment. According to “Investor’s Business Daily,” the December 2013 U6 unemployment rate was 13.1 percent.

Another meaningful number to watch is the labor force participation rate. This measures the number of people actively looking for work or who are employed. This is important because those with no interest in working are not included. According to the Bureau of Labor Statistics, the labor force participation rate has dropped from 68 to 63 percent during our recent financial crisis. This is the worst report in forty years.

Housing activity depends on jobs, and jobs depend on housing activity. Barring a significant setback in U.S. economic and job growth, the current forecast is for housing starts to return to the trend line of 1.5 million per year by 2016. This should lead to increased spending in all other sectors of the economy. Let us hope that we have learned our lessons on prerequisites for lending money and that housing activity continues to move forward in a thoughtful and well-timed manner. Stay focused and invest accordingly.

Opinions expressed herein are those of the author and subject to change at any time. Information obtained from outside sources is believed to be reliable.

This article provided by Darcie Guerin, CFP®, Associate Vice President, Investments & Branch Manager of Raymond James & Associates, Inc. Member New York Stock Exchange/SIPC 606 Bald Eagle Dr. Suite 401, Marco Island, FL 34145. She may be reached at 239-389-1041,darcie.guerin@raymondjames.com or www.raymondjames.com/Darcie. Please contact Darcie with any questions you would like to have answered in this column.